Chris Paul recorded a triple-double en route to his 10,000th career assist and the Phoenix Suns took advantage of the absence of LeBron James to record a front-running 111-94 victory over the visiting Los Angeles Lakers on Sunday night.

The win not only pushed the Suns one game ahead of the defending NBA champions in the Pacific Division, but also clinched the three-game season series. Phoenix had won at Los Angeles 114-104 earlier this month.

Devin Booker and Deandre Ayton shared game-high scoring honors with 26 points apiece for the Suns, who won their second straight on the eve of a four-game Southeastern swing.

Paul finished with 11 points, a game-high-tying 10 rebounds and a game-high 13 assists, the ninth of which made him the sixth player in NBA history to reach the 10,000 milestone. He joins John Stockton, Jason Kidd, Steve Nash, Mark Jackson and Magic Johnson in the exclusive club.

Tobias Harris hit two free throws with 5.3 seconds left in overtime to cap a wild fourth quarter and extra session and lift visiting Philadelphia to a win over New York.

Shake Milton finished with a team-high 21 points off the bench while Harris had 20 points for the Eastern Conference-leading 76ers, who won for the eighth time in nine.

Julius Randle had 24 points and Alec Burks scored 16 of his 20 points in the fourth quarter and overtime for the Knicks, who lost for the third time in four games. 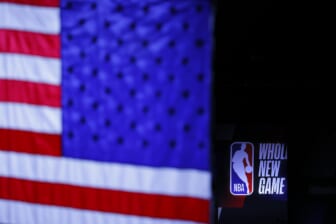 Also Read:
NBA TV ratings in 2020-21, numbers that will define the season

Josh Richardson scored 21 points and Dorian-Finney Smith added 13 for Dallas, which made 19 of 37 from 3-point range and shot 55.8 percent overall. Kristaps Porzingis had 12 points, while Tim Hardaway Jr. and Dwight Powell tallied 11 apiece.

Justin Holiday made the go-ahead 3-pointer with 2:32 left in overtime, leading Indiana past host Miami.

Indiana made three 3-pointers in overtime, including two by Holiday and one by Malcolm Brogdon. Caris LeVert added a mid-range jumper with 48 seconds left to give Indiana a 109-106 lead.

For Miami, Tyler Herro missed a 3-pointer that could have tied the score with 30 seconds left, and Jimmy Butler was off on a 3-pointer at the buzzer. The Heat lost their third straight game, including two in three days to the Pacers.

Luguentz Dort scored 23 points and blocked a layup in the waning moments as visiting Oklahoma City held on to beat Houston.

Rockets guard John Wall initially beat Dort off the dribble only for the latter to recover defensively and record the block to preserve a one-point lead. Aleksej Pokusevski (nine points, nine rebounds) snagged the rebound and split a pair of free throws before Wall missed a 3-pointer at the buzzer to send the Rockets to their 20th consecutive loss.

After losing two games in the final seconds to Washington in January, the Nets withstood a late charge and won for the 15th time in 17 games. Irving shot 10 of 25 from the floor, adding seven rebounds and six assists. Blake Griffin made his debut for Brooklyn and converted a dunk in 15 minutes. 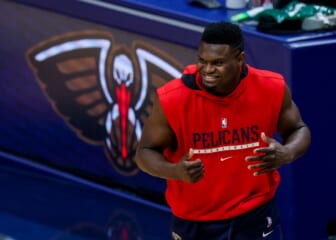 Nickeil Alexander-Walker scored 20 points, Josh Hart had 12 and Steven Adams grabbed 13 rebounds for New Orleans, which has won three in a row in Denver. The Pelicans played without Lonzo Ball due to a right hip flexor strain.

Nikola Jokic had 29 points, 10 rebounds and 10 assists for his 11th triple-double of the season for Denver. Jamal Murray scored 23 points, Michael Porter Jr. had 17 points and nine rebounds and Will Barton added 16 points for the Nuggets.

It was the eighth loss in a row for the Raptors. They had not lost eight straight since Jan. 10-22, 2012. Fred VanVleet scored 23 points, Kyle Lowry and Norman Powell each scored 18 points and OG Anunoby had 17 for Toronto.

Jaylen Brown hit a career-high 10 3-pointers en route to a game-high 34 points and Boston snapped a three-game skid with a win over Orlando.

NBA trade deadline: 5 realistic trades we could see this week

All five Celtics starters made at least one 3-pointer in a 23-of-54 collective effort from deep, and each scored in double-digits.

Jayson Tatum went 5-of-8 from beyond the arc and finished with 23 points, Kemba Walker notched 14 points, Daniel Theis recorded a double-double with 13 points and 11 rebounds, and Marcus Smart added 11 points with a game-high eight assists.

Jerami Grant led Detroit with 26 points, but 14 of them came in the opening quarter. Mason Plumlee had 12 points and 10 rebounds, and Frank Jackson scored 12 points.