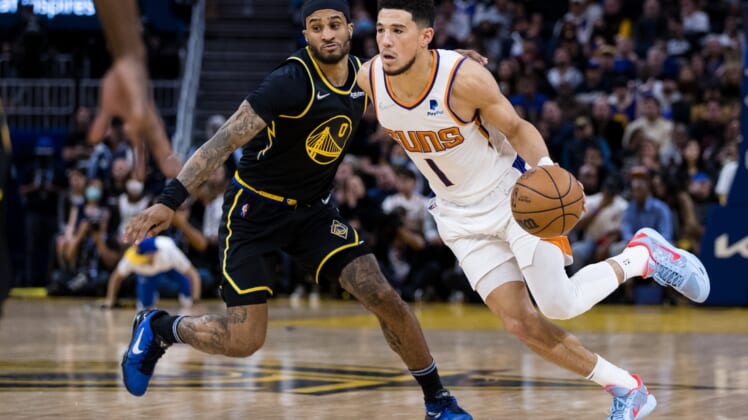 Chris Paul hit the game’s final two baskets 1:24 apart, including a clutch runner in the lane with 13.1 seconds remaining, as the Phoenix Suns survived a foul-filled finish to equal their single-season franchise record for wins with a 107-103 victory over the Golden State Warriors on Wednesday in San Francisco.

Jordan Poole tied his career high, set last May against the New Orleans Pelicans, with a game-high 38 points for the Warriors. Golden State took its fourth straight loss and dropped into a tie for third place in the Western Conference with the Dallas Mavericks.

Bam Adebayo added 17 points and a team-high 12 rebounds as the Heat kept a one-game lead in the Eastern Conference over the Milwaukee Bucks. Boston and the Philadelphia 76ers both trail Miami by two games.

Luka Doncic had a game-high 35 points, nine rebounds and 13 assists to power visiting Dallas to a victory over struggling Cleveland.

Caris LeVert had a team-high 32 points for the Cavaliers, his high since coming to Cleveland at the trade deadline. Darius Garland added 25 points and 10 assists for the Cavs.

Anthony Edwards scored 24 points while Karl-Anthony Towns amassed 16 points and 10 rebounds for the Timberwolves, who have lost four of their past five.

The Wizards outscored the Magic 28-23 in the third quarter to extend a 58-56 lead before pulling away with a 41-point fourth period. Reserve center Daniel Gafford turned in a strong effort in the fourth quarter with 10 of his 17 points, helping Washington sweep the four-game season series.

Nikola Jokic had 37 points, 13 rebounds and nine assists and Denver recovered after blowing a 31-point lead to beat Indiana in Indianapolis.

Bones Hyland scored 13 of his 20 points in the fourth quarter for Denver, which won its third game in a row. Will Barton had 18 points, DeMarcus Cousins and Monte Morris scored 11 each and Aaron Gordon added 10.

Goga Bitadze had 17 points and 10 rebounds for the Pacers, who dropped their fifth consecutive game.

Trae Young scored 41 points and dished out eight assists to lead visiting Atlanta to a win over Oklahoma City.

The Hawks earned their third consecutive win and improved to 8-3 in their past 11 games as they moved closer to securing a spot in the Eastern Conference play-in tournament.

The game was Young’s first against his high school teammate, Lindy Waters III. The Thunder rookie didn’t match Young’s performance, but he did lead his team with a season-high 25 points.

Miles Bridges scored 14 of his game-high 31 points in the final 3:30 of the fourth quarter for visiting Charlotte, which clinched at worst a spot in the Eastern Conference play-in tournament and all but ended New York’s playoff hopes.

LaMelo Bell scored 20 points and racked up a career-high 15 assists for the Hornets, who received 21 points off the bench from Kelly Oubre Jr. Terry Rozier had 15 points as Charlotte won for the eighth time in 10 games.

Evan Fournier put up 30 points, RJ Barrett had 25 and Julius Randle scored 21 for the Knicks, whose four-game winning streak ended.

Dillon Brooks added 21 points as the Grizzlies recorded their sixth straight win and clinch the second seed in the West.

CJ McCollum scored 25 points in his first visit to Portland as a visiting player to help New Orleans post a victory over the slumping Trail Blazers.

Drew Eubanks scored 21 points on 10-of-12 shooting and collected nine rebounds for the Trail Blazers, who lost their fifth straight game and fell for the 15th in time in 17 outings.