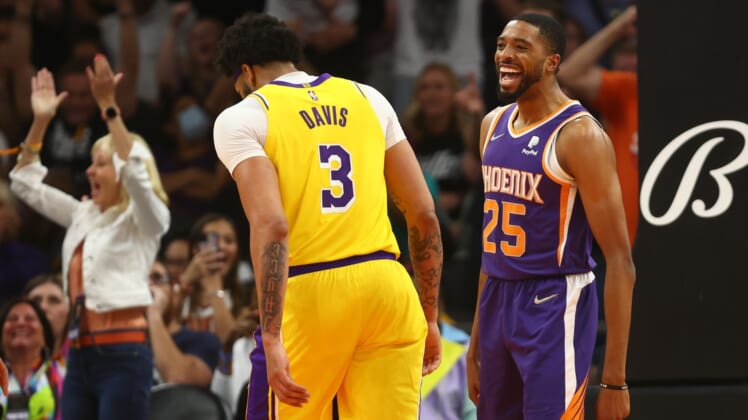 Devin Booker scored 32 points and made six 3-pointers in three quarters on Tuesday night to help Phoenix post a 121-110 victory over visiting Los Angeles, a triumph that eliminated the Lakers from the play-in berth race as well as providing the Suns with a franchise-record 63rd victory.

LeBron James sat out with an ankle injury for the fifth time in seven games as Los Angeles lost its seventh straight game. The setback stomped out the Lakers’ final hope after the San Antonio Spurs defeated the Denver Nuggets earlier in the night.

Deandre Ayton added 22 points and 13 rebounds and Chris Paul recorded 12 assists as the NBA-best Suns snapped a two-game slide. Phoenix surpassed the 62 wins put together by the 1992-93 and 2004-05 teams.

Russell Westbrook scored 28 points and Anthony Davis registered 21 points and 13 rebounds for Los Angeles, which dropped to 11-28 on the road. Phoenix is an NBA-best 32-8 at home.

Nikola Jokic had 41 points and 17 rebounds and Aaron Gordon added 18 points and 13 rebounds for Denver, which still needs one win or a Minnesota Timberwolves loss to secure at least the sixth seed and avoid the West’s play-in tourney.

Rudy Gobert scored five of his 22 points late in overtime and hauled in 21 rebounds as Utah escaped with a win over Memphis in Salt Lake City.

The Jazz’s win combined with the Timberwolves’ loss to the Washington Wizards allowed Utah to clinch no worse than the sixth seed in the Western Conference playoffs. Utah holds a half-game lead for the No. 5 spot over the Nuggets.

Pascal Siakam scored a game-high 31 points and Toronto clinched an Eastern Conference playoff spot with a win vs. visiting Atlanta.

Scottie Barnes also recorded a double-double with 19 points and a game-high-tying 14 rebounds, while Chris Boucher chipped in with 18 points.

Trae Young had 26 points and a game-high 15 rebounds for Atlanta, which saw a five-game winning streak come to an end. The Hawks got 21 points from Kevin Huerter, 20 from De’Andre Hunter and 19 from Bogdan Bogdanovic.

Brook Lopez scored a season-high 28 points, Khris Middleton added 19 points and Jrue Holiday had 11 points and 13 assists as visiting Milwaukee stopped a two-game losing streak with a win over Chicago.

DeMar DeRozan scored a game-high 40 points for the Bulls, who secured their first playoff berth in five seasons when the Cleveland Cavaliers lost at Orlando earlier Tuesday. Chicago is assured of a top-six seed in the East and will avoid the conference play-in tournament.

Tyler Herro scored a season-high 35 points as host Miami won its fifth straight and swept a four-game season series against the Hornets.

Jimmy Butler added 27 points, a team-high eight assists and five rebounds for the Heat, who posted the second-highest point total in franchise history. However, the Heat lost P.J. Tucker (right calf strain) in the first half.

Miles Bridges scored 14 of his team-high 29 points in the third quarter for Charlotte, and LaMelo Ball had 18 points and a game-high 14 assists.

Kyrie Irving scored 42 points as Brooklyn led most of the way and picked up a crucial victory over Houston in New York.

The Nets moved into a tie for eighth place, alongside the Hawks, and one game ahead of the Hornets. Irving made 13 of 24 shots after shooting 12 of 32 (37.5 percent) Saturday in a loss at Atlanta. On Tuesday, he hit eight 3-pointers.

Kevin Durant followed up his 55-point showing Saturday by finishing with 18 points on 4-of-13 shooting on Tuesday. Kevin Porter Jr. scored a season-high 36 points to lead the Rockets, and rookie Jalen Green added 30 points for his fifth straight game with at least 30.

Joel Embiid collected 45 points and 13 rebounds and Tyrese Maxey made a career-high eight 3-pointers to fuel Philadelphia’s win over Indiana in Indianapolis.

Embiid recorded his 12th game this season with at least 40 points and 10 rebounds, third-best since the ABA-NBA merger in 1976-77. Maxey finished with 30 points for the 76ers, who sank a franchise-best 23 3-pointers en route to notching their third straight victory.

Buddy Hield collected 25 points, 11 rebounds and five assists, while Tyrese Haliburton added 21, eight and five, respectively, for the Pacers, who have lost a season-high eight in a row.

Markelle Fultz had 16 points and six assists in his first start in almost 15 months, helping host Orlando break a six-game losing streak with a win over Cleveland.

Ignas Brazdeikis contributed a season-high 20 points — 14 in the opening half — and Moe Wagner netted 15 points on 6-for-8 shooting in 20 minutes.

For Cleveland, Darius Garland (10 assists) scored 13 of his game-high 27 points in the fourth quarter and Lauri Markkanen chipped in 25 points, making six of the Cavaliers’ 16 3-pointers.

Kristaps Porzingis scored 25 points and Daniel Gafford added a career-high 24 as Washington pulled away in the fourth quarter to beat Minnesota in Minneapolis.

Rui Hachimura had 21 points and Deni Avdija added 17 for Washington, which led by as many as 23 and won for the fifth time in seven games.

Hayes, with 12 rebounds, and Willy Hernangomez, with 12 points and 12 rebounds, put up double-doubles for the Pelicans, who remained one game ahead of the 10th-place Spurs.

Davion Mitchell had 15 points and 17 assists and Damian Jones scored 22 points for the Kings.

Jaylen Hoard scored a career-high 24 points and tied a career high with 20 rebounds to lead Oklahoma City to a home win over Portland.

Hoard was 11 of 17 from the floor. Isaiah Roby added 18 points and Georgios Kalaitzakis had 17 points for the Thunder.