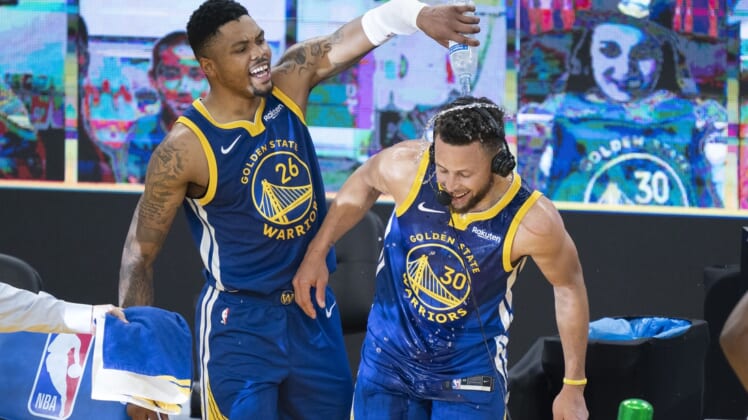 Stephen Curry became the all-time leading scorer in Golden State Warriors history with the ninth 50-point game of his career, exploding for 53 in a 116-107 victory over the visiting Denver Nuggets on Monday night.

The Nuggets might have lost more than just a second straight game, as standout guard Jamal Murray went down with a left knee injury with 50.6 seconds remaining in the game.

Murray, who missed the previous four games with a sore right knee, was escorted straight to the locker room after the fall, which came at the end of a 17-point night. Coach Michael Malone said postgame that Murray would undergo an MRI exam.

Curry began the game with 17,765 points in his Warriors career, needing 18 to equal Wilt Chamberlain’s all-time franchise record. He got there in the first quarter, then went on to finish the night with 10 3-pointers. Nikola Jokic finished with 27 points, 12 rebounds and eight assists for the Nuggets, and Michael Porter Jr. scored 24.

Westbrook scored 25 points, dished out 14 assists and grabbed 14 rebounds to help the Wizards beat the Jazz for the second time in a month. Utah had won 11 of 13 games since falling at Washington on March 18.

The Jazz lost despite getting 42 points from Donovan Mitchell and 33 from Bojan Bogdanovic.

Julius Randle scored 34 points and grabbed 10 rebounds as New York took control in the third quarter, fended off a comeback attempt in the fourth and recorded a double-digit victory over visiting Los Angeles.

Randle thrived against his former team by shooting 13 of 23 from the field as the Knicks shot 47.2 percent overall and overcame missing 22 of 27 3-point tries. Elfrid Payton added 20 points and reserve Derrick Rose chipped in 14 to help the Knicks win their third straight.

The Lakers dropped to 5-8 in the 13 games superstars Anthony Davis (strained right calf) and LeBron James (right ankle) have missed this season. Dennis Schroder paced the Lakers with 21 points and Markieff Morris added 17.

Joel Embiid had 36 points and seven rebounds to lift Philadelphia past host Dallas. Embiid shot 10 of 17 from the field and 14 of 15 from the free-throw line in only 26 minutes.

Furkan Korkmaz added 20 points in just 18 minutes off the bench while Tobias Harris and Shake Milton contributed 10 each for the Sixers. With the win, Philadelphia moved past the Brooklyn Nets and back into first place in the Eastern Conference.

Luka Doncic led the Mavericks with 32 points, his 19th game this season with at least 30, while Jalen Brunson added 15. Kristaps Porzingis (rest) did not play.

Read More: NBA TV ratings soar in 2020-21, numbers that will define the season

Jae Crowder made a career-high eight 3-pointers, fueling Phoenix’s franchise-record 25 made shots beyond the arc, in a victory over visiting Houston.

The Suns made 25 of 45 (55.6 percent) from 3-point range to top the mark set less than two months ago. Crowder, who was 8 of 9 from long range in the first half, finished 8 of 12 before fouling out with 44 seconds left in the fourth quarter.

Phoenix’s Devin Booker had 24 points, seven rebounds and seven assists. Deandre Ayton finished with 18 points on 9-of-13 shooting from the field and pulled down eight rebounds. Houston was led by Christian Wood’s 25 points and 15 rebounds and Kevin Porter Jr.’s 22 points and 14 assists.

The Spurs roared to the front with an 18-0 run in the first quarter and never looked back, overwhelming Orlando while building a 28-point lead after three quarters. The win was the second straight for San Antonio.

R.J. Hampton scored 16 points for the Magic, who have lost six consecutive games, including all four on the homestand that ended Monday.

The teams committed a combined 37 turnovers, 20 of them by the Grizzlies.

Eric Bledsoe added 13 points and Kira Lewis Jr. and Wes Iwundu had 11 each as the Pelicans won their third straight.

The Pelicans led by 23 at halftime and withstood repeated second-half charges by the Kings, who lost their seventh straight. De’Aaron Fox scored 43 points for Sacramento, and Harrison Barnes had 16 points and 11 rebounds.