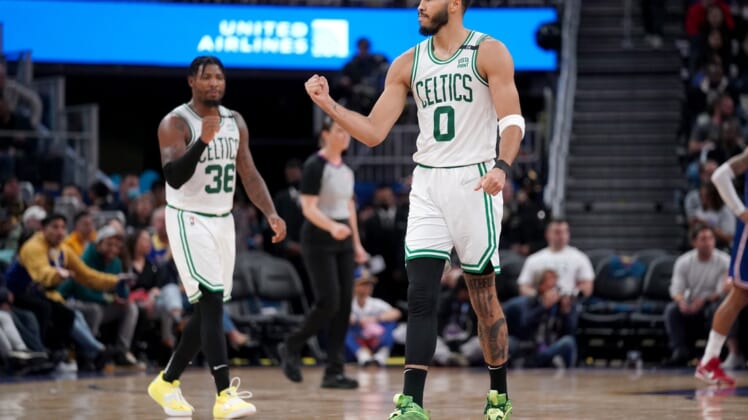 Jayson Tatum and Jaylen Brown scored 26 points apiece and the Boston Celtics’ defense suffocated the Warriors well before Golden State lost Stephen Curry to a foot injury in the second quarter of a 110-88 nationally televised blowout Wednesday in San Francisco.

Marcus Smart chipped in with 20 points for the Celtics, who held Golden State to a season-low 32 points in the first half. Boston earned its sixth win in seven games.

Curry got hurt in the second quarter when Smart landed on the back of his left leg while diving for possession. He exited with what the Warriors labeled as left foot soreness. The two-time league MVP was due to undergo an MRI exam, Warriors coach Steve Kerr said postgame.

Jordan Poole led all scorers with 29 points for the Warriors, who saw their four-game winning streak end.

Spencer Dinwiddie beat his former team by hitting the game-winning 3-pointer with one second remaining as surging Dallas overcame another double-digit deficit to beat Brooklyn in New York.

Dinwiddie’s game-winner gave Dallas its eighth win in nine games and its 15th comeback from a double-digit deficit this season. It also was Dinwiddie’s second straight game-winner after he hit the game-winning 3-pointer Sunday in Boston.

Dallas’ Luka Doncic led all scorers with 37 points to go along with nine points and nine rebounds. Kevin Durant constantly encountered double teams but led the Nets with 23 points on 8-of-20 shooting and added 10 assists.

P.J. Washington scored 13 of his 16 points in the final 4 1/2 minutes, and Charlotte pulled away to defeat visiting Atlanta in a key Eastern Conference game.

LaMelo Ball led the Hornets with 22 points and 11 assists, capped by a long 3-pointer in the final minute. Montrezl Harrell had 20 points and Miles Bridges and Terry Rozier each scored 18 points for Charlotte.

Trae Young, Atlanta’s star guard, was held to a season-low nine points on 3-for-12 shooting from the field. He had scored at least 13 points in every game this season and averaged more than 28 points per game. first half. De’Andre Hunter scored 21 points for the Hawks, who made 13 of their 37 attempts from 3-point range.

Joel Embiid, playing on his 28th birthday, logged 35 points, 17 rebounds and five assists to propel visiting Philadelphia to a hard-fought win over Cleveland.

Tyrese Maxey added 25 points for the Sixers, who have alternated wins and losses over their past seven games. James Harden had 21 points and 11 assists, and Tobias Harris contributed 19 points and six rebounds before fouling out.

Devin Booker scored 15 of his game-high 36 points in the third quarter to help visiting Phoenix pull away from stubborn Houston.

Mikal Bridges added 26 points for Phoenix while Torrey Craig posted a double-double of 21 points and 14 rebounds while shooting 8 for 8 from the floor. Deandre Ayton (23 points, 11 rebounds) provided additional support as Booker notched his 22nd 30-point game this season.

Rockets guards Kevin Porter Jr. and Jalen Green combined for 43 points on 16-for-30 shooting, including 9 for 16 from deep as Houston shot 16 for 39 on 3-pointers. Porter added a team-high eight assists while Christian Wood paired 18 points with nine rebounds and Dennis Schroder totaled 17 points and six assists off the bench. Houston has lost 20 of its last 23 games.

Scottie Barnes scored 15 points as the Raptors extended their winning streak to five games and won in downtown L.A. for the second time in two days after defeating the Los Angeles Lakers 114-103 on Monday.

Reggie Jackson had 23 points and nine assists for the Clippers and Marcus Morris Sr. added 22 as both returned to the court after getting a rest day Monday in a loss at Cleveland.

RJ Barrett scored 31 points and Julius Randle flirted with a triple-double for host New York in a win over Portland.

Randle finished with 20 points, nine rebounds and seven assists for the Knicks, who were rarely threatened by the Trail Blazers. The victory snapped a two-game losing streak for New York, which remained five games out of 10th place in the Eastern Conference and the final spot in the play-in tournament.

Josh Hart scored 17 points as the skidding Trail Blazers lost for the eighth time in nine games to fall to 26-42, which ensured the franchise’s first losing season in a full 82-game schedule since the 2012-13 team went 33-49.

Nikola Jokic had 29 points to eclipse 10,000 for his career and added 13 rebounds and eight assists, Bones Hyland scored 17 and visiting Denver beat Washington.

The Nuggets have won seven in a row on the road to set a franchise record. Their last loss away from home was Feb. 11 at Boston. Denver also tied the franchise record for most road wins in a season with 22.

Deni Avdija had 19 points, Kristaps Porzingis scored 16 and Corey Kispert added 15 for the Wizards, who have lost five straight.

Karl-Anthony Towns scored 30 points and Anthony Edwards added 27 as Minnesota never trailed in a win over Los Angeles in Minneapolis.

Patrick Beverley contributed 18 points while Taurean Prince added 13 and Jaylen Nowell had 10 for Minnesota, which led by as many as 25 in the second quarter. The Wolves have won three straight and nine of their past 10.

LeBron James paced Los Angeles with 19 points while Carmelo Anthony scored 16 and Russell Westbrook added 15. The Lakers have lost 12 of their past 15 games, and they have dropped each of their past 11 road contests.

The Spurs led by 12 at halftime, by 16 in the third quarter and by seven entering the fourth, but Oklahoma City rallied. Walker’s game-winner was the Spurs’ season-high 19th 3-pointer of the contest, giving San Antonio just its third victory in 10 games.

Dejounte Murray led the Spurs with 26 points and 12 assists. Shai Gilgeous-Alexander led all scorers with 34 points and added eight assists for the Thunder, who have dropped seven straight games.

Donovan Mitchell blew up for 25 of his game-high 37 points in the third quarter to lead Utah to a win over Chicago in Salt Lake City.

Mitchell sank nine 3-pointers, seven of them in the third period. Rudy Gobert amassed 14 points, 20 rebounds and four blocked shots, and the Jazz bench — led by Jordan Clarkson and Nickeil Alexander-Walker — gave the team a huge lift as Utah rebounded from a home loss to the Milwaukee Bucks on Monday.

Zach LaVine scored 33 points with five 3-pointers, DeMar DeRozan added 25 points, seven assists and five rebounds and Nikola Vucevic totaled 11 rebounds and 10 points as the Bulls fell for the seventh time in their past nine outings.

Khris Middleton made a season-high seven 3-pointers and recorded 32 points, eight rebounds and eight assists as the Bucks won for the eighth time in their past nine overall games. Jrue Holiday contributed 21 points and four steals and Bobby Portis added 12 points for Milwaukee.