NBA roundup: Stats, scores from May 1 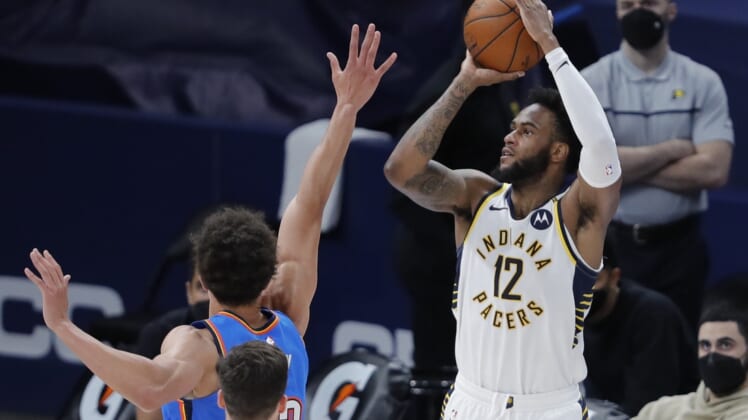 Domantas Sabonis had 26 points, 19 rebounds and a career-high 14 assists to lead the Indiana Pacers to a 152-95 blowout win over the host Oklahoma City Thunder on Saturday.

The result was a home team’s largest margin of defeat in NBA history. The Pacers’ 152 points were the most in franchise history since the team moved to the NBA in 1976-77. The 57-point margin was the largest loss in Thunder franchise history.

Indiana flirted with the largest margin in NBA history — Cleveland’s 68-point win over Miami in December 1991 — with the Pacers leading by as many as 67 in the fourth quarter.

The Pacers’ Doug McDermott tied his career high with 31 points, scoring 16 with four 3-pointers in the first quarter. Moses Brown led the Thunder with 16 points.

Bojan Bogdanovic scored 34 points, Rudy Gobert had a double-double and a couple of key late buckets, and short-handed Utah Jazz regained the top spot in the NBA with a win over Toronto in Salt Lake City.

Dorian Finney-Smith canned the deciding 3-pointer with 9.3 seconds left to play and Luka Doncic racked up his first triple-double since March 15 as Dallas outlasted visiting Washington.

Dallas led by 12 points after one period and by five at the half before the Wizards leapfrogged to the front with a surge at the end of the third quarter.

Bradley Beal put Washington in front with a pair of free throws with 26.1 seconds remaining before Doncic found Finney-Smith in the corner for his huge 3-point shot. Beal then missed the potential game-winning 3-pointer with 2.6 seconds to play.

A 13-0 run in the fourth quarter, 29 points from Terry Rozier and the return of LaMelo Ball to the lineup powered host Charlotte past Detroit.

Ball played a solid all-around game in his return from a wrist injury that had sidelined him since March 20. He finished with 11 points, a game-high eight assists and seven rebounds.

The Pistons finished 13-of-37 from outside but shot just 22-of-54 from inside the 3-point arc. Killian Hayes, who had 10 points, six rebounds and six assists, shot 4-of-11 from the floor.

Williamson made 14-of-17 field goals and added nine rebounds and tied a career high with eight assists. Ball scored a career-high 33 points while tying a career best with eight 3-pointers, and added 11 rebounds.

Rookie Anthony Edwards scored 29 points and Karl-Anthony Towns had 28 points and 14 rebounds before fouling out as the Timberwolves saw their season-best four-game winning streak come to an end.

Nikola Jokic made another statement in his MVP candidacy, leading Denver to a road win over Los Angeles.

Jokic finished with game-high totals of 30 points, 14 rebounds and seven assists. Michael Porter Jr. contributed 25 points, seven rebounds and five assists, and PJ Dozier added 16 points. With the win, the Nuggets overtook the Clippers for the third spot in the Western Conference by a half-game.

Kawhi Leonard returned to the starting lineup for the Clippers after a five-game absence. Leonard, who had played just one game over the past three weeks due to a sore right foot, finished with 16 points and six assists. Paul George led Los Angeles with 20 points.

Stephen Curry exploded for 23 of his 30 points in the third quarter as Golden State turned an extended run into a road victory over Houston.

Kevin Porter Jr. scored 14 of his 16 points in the first half and added six assists for Houston. Jae’Sean Tate had 14 points, three assists and three steals while Christian Wood paired 10 points with seven boards for the Rockets.

Miami, which has won six of eight games, also got 20 points from Duncan Robinson. Trevor Ariza added 18 points, and Max Strus had 17, including 14 in the first half. Bam Adebayo added 13 points and 10 rebounds as Miami went four games over .500 for just the second time this season.

Kevin Love and Collin Sexton led Cleveland with 25 points each, but the Cavaliers still lost their sixth straight game.

Trae Young scored 33 points while Clint Capela and John Collins each recorded double-doubles to lead host Atlanta to a victory over Chicago.

The Hawks snapped a three-game losing streak and took sole possession of fifth place in the Eastern Conference, a half-game ahead of the idle Boston Celtics. Capela scored 20 points and grabbed 11 rebounds while Collins finished with 13 points and 10 rebounds.

Rookie Cole Anthony swished a deep 3-pointer with 0.1 seconds left to cap his season-best, 26-point performance and provide Orlando with a comeback victory over visiting Memphis.

Anthony’s dramatic shot over Memphis’ Kyle Anderson was the finishing touch as the Magic overcame a 20-point deficit to split the back-to-back with the Grizzlies. Moritz Wagner scored a season-high 24 points and Dwayne Bacon added 23 as Orlando won for just the third time in 16 games.

Dillon Brooks scored 23 points for Memphis, and he knocked down an 18-footer with seven seconds left to give the Grizzlies a 111-109 lead. Ja Morant recorded 22 points and seven assists, Anderson scored 21 points, and Jonas Valanciunas had 11 points and 16 rebounds for Memphis.