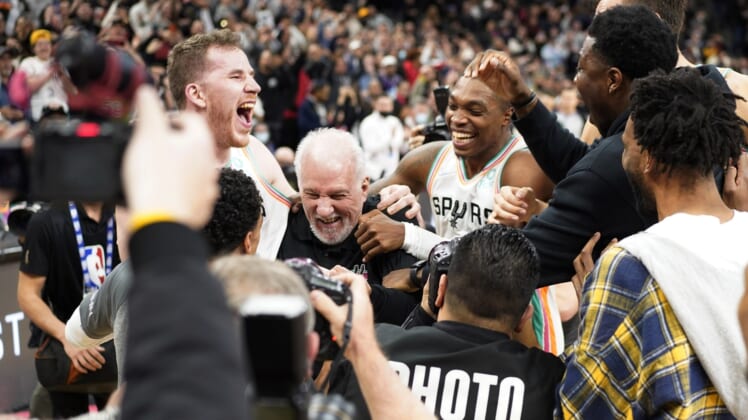 San Antonio coach Gregg Popovich is not one to call attention to himself, but his players made sure he basked in the limelight for at least a few minutes after he became the NBA’s all-time leader in regular-season coaching wins Friday night.

The Spurs players kept Popovich on the court to soak in the applause from the home fans after his team rallied for a 104-102 win over the Utah Jazz. He looked uncomfortable amid the attention but finally cracked a smile.

His grin was about more than just the record, as the Spurs rallied from 15 points down in the fourth quarter to give Popovich the record. San Antonio had been 0-33 in games it was trailing entering the final period. The victory, Popovich’s 1,336th, pushed him past Don Nelson. Popovich is in his 26th NBA season, all with the Spurs.

Gary Trent Jr. matched his season best with 42 points, hitting eight 3-pointers, and visiting Toronto withstood a comeback by Phoenix for the win.

Pascal Siakam added 25 points and 10 assists for the Raptors, who won their second in a row. Toronto’s Scottie Barnes had 15 points.

Cameron Payne scored 24 points for the Suns, who fell to 5-4 since losing Chris Paul to a broken thumb. Devin Booker added 22 points and seven assists.

Cade Cunningham led the Pistons with 27 points. Jerami Grant and Marvin Bagley III each scored 20 for Detroit, which has lost back-to-back games following a 6-2 stretch.

Ja Morant scored 15 of his 37 points in the fourth quarter as Memphis overcame a 15-point deficit and earned a victory over visiting New York.

The Grizzlies faced a 96-81 deficit with 1:08 left in the third quarter but outscored New York 37-18 the rest of the way. Morant shot 14 of 33 to post his 24th 30-point game this season. He helped Memphis win for the fifth time in seven games.

Julius Randle had 36 points and 12 rebounds for the Knicks, who missed a chance at a season-high fourth straight win. Randle shot 11 of 27, including 1 of 5 in the fourth quarter.

Dwight Powell joined Luka Doncic with double-doubles as Dallas rebounded from a 30-point trouncing at the hands of the Knicks to beat host Houston.

Kevin Porter Jr. and Josh Christopher shared team-high scoring honors with 17 points apiece for the Rockets, who were coming off a 139-130 overtime win over the Los Angeles Lakers at home on Wednesday.

Minnesota, which entered the game averaging a league-best 114.7 points per game, went 15-for-45 from 3-point range and had five players score in double figures. Anthony Edwards scored 25 points, and Karl-Anthony Towns overcame foul trouble to post 21 points and 13 rebounds.

Trae Young had 27 points and 11 assists as host Atlanta withstood a late charge from Los Angeles to snap a two-game losing streak.

Jimmy Butler, who returned after a one-game absence caused by a sinus issue, scored 11 points during the crucial third quarter, leading host Miami over Cleveland.

Butler finished with 24 points, five assists, four rebounds and three steals. He was the key as Miami stretched a one-point halftime lead to 13 after three quarters. Miami also got 30 points and 17 rebounds — both game highs — from Bam Adebayo while winning for the 13th time in 16 games.

Cleveland, which had its two-game win streak snapped, was led by Darius Garland, who had 24 points and 10 assists. Rookie Evan Mobley added 19 points and 12 rebounds.

Terry Rozier added 25 points for the Hornets, who shot 59.8 percent from the floor, including 46.8 percent on 3-point attempts. Charlotte had won just three of its previous 10 games but took command by outscoring New Orleans 42-27 in the third quarter.