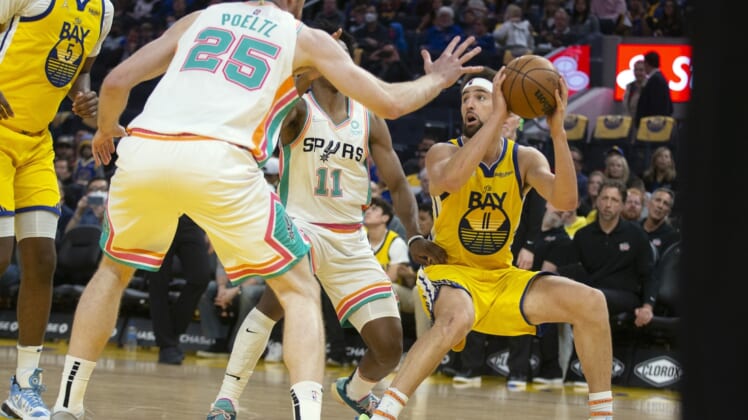 Keldon Johnson followed in a missed free throw with three-tenths of a second remaining Sunday night, allowing the visiting San Antonio Spurs to survive a foul-filled finish to stun the Golden State Warriors 110-108 in San Francisco.

Josh Richardson came off the bench to score a team-high 25 points and was one of six Spurs with multiple 3-pointers as San Antonio won at Golden State for the second time this season.

Jordan Poole led all scorers with 28 points and Klay Thompson chipped in with 24 for the Warriors, who played for the first time since Stephen Curry suffered a foot injury against the Boston Celtics on Wednesday.

Johnson finished with 14 points, seven rebounds and five assists for the Spurs, while Dejounte Murray had his typically strong all-around game with 19 points, six rebounds and a game-high eight assists.

Chris Boucher added 12 points and 14 rebounds and Precious Achiuwa matched his season best with 21 points for the Raptors, who have won six of their past seven games. Scottie Barnes added 13 points.

Joel Embiid had 21 points and 13 rebounds for the 76ers, who had won their two previous games. Tyrese Maxey had 19 points, James Harden added 17 points, Matisse Thybulle had 12 and Georges Niang scored 11.

Payton Pritchard scored 17 and Grant Williams had 13 points for Boston, which has won the first three games of its four-game road trip.

Nikola Jokic had 23 points on 8-for-23 shooting, Aaron Gordon scored 13, DeMarcus Cousins had 12 and Bones Hyland 11 for Denver, which has lost two straight and three in a row at home.

Donovan Mitchell, a New York City-area native, scored 36 points in his return to action as visiting Utah pulled away in the fourth quarter to earn the win over New York.

Mitchell — who was born about 25 miles from Madison Square Garden in Elmsford, N.Y. — missed Friday’s 121-92 win over the Los Angeles Clippers due to a calf injury. Jordan Clarkson scored 23 points for the Jazz, who increased their lead over the idle Dallas Mavericks to two games in the race for fourth place in the Western Conference.

RJ Barrett scored 24 points and Julius Randle had a double-double (13 points, 11 rebounds) for the Knicks, who remained five games behind the Atlanta Hawks in the race for 10th place in the Eastern Conference and the final spot in the play-in tournament. Evan Fournier had 17 points while Immanuel Quickley added 16.

Mikal Bridges scored 27 points and Landry Shamet added 21 for Phoenix, which trailed by as many as 14 early in the third quarter. JaVale McGee had 14 points while Deandre Ayton had 12 points and 10 rebounds.

Rookie Davion Mitchell paced Sacramento with career highs in points (28) and assists (nine). Harrison Barnes scored 21 points while Domantas Sabonis had 18 points and 12 rebounds before exiting late in the fourth quarter with a left knee injury.

Justin Anderson scored a season-high 18 points in his first start of the season for the Pacers, who finished with seven players scoring in double figures. Terry Taylor made all seven of his shots to match Jalen Smith with 17 points for Indiana, which enjoyed a 56-31 advantage in points from its reserves.

The Pacers led wire-to-wire to send Portland to its fourth straight loss and 10th in the last 11 games. The Blazers are winless on their current five-game road swing, which concludes Monday in Detroit. Josh Hart went 3-of-5 from long range and finished with a game-high 26 points for Portland.

Wendell Carter Jr. had a career-high 30 points and 16 rebounds as host Orlando snapped a three-game losing streak with a comeback win over short-handed Oklahoma City.

Orlando, which improved to 2-3 on its six-game homestand, outscored the Thunder 28-21 in the fourth quarter. Franz Wagner finished with 11 points, seven rebounds and four assists as the Magic overcame 24 missed 3-pointers (7-for-31) and 21 total turnovers.

The Thunder, who failed to reach 100 points for the first time since Feb. 11 when they dropped a 100-87 decision at Philadelphia, had all nine available players reach the scoring column. Darius Bazley scored 18 points, making two triples, but Oklahoma City shot only 33 percent (30-for-92) as a team and committed 16 turnovers.

Jonas Valanciunas had 26 points and 12 rebounds to lead three New Orleans players with double-doubles in a win over host Atlanta.

Willy Hernangomez had 17 points and 10 rebounds in 15 minutes off the bench, while Jaxson Hayes added 12 points and 12 rebounds. CJ McCollum scored 25 points, Jose Alvarado had 15 and Herbert Jones 11.

Desmond Bane and Dillon Brooks combined for 44 points as Memphis rolled to a road victory over Houston despite the absence of Ja Morant.