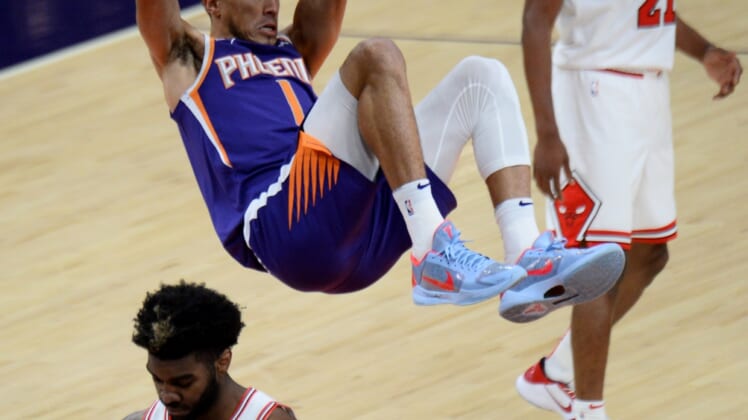 Devin Booker scored a season-high 45 points on 17-of-24 shooting, and the Phoenix Suns held on for a 121-116 win over the visiting Chicago Bulls on Wednesday night.

Chris Paul contributed 19 points and 14 assists for Phoenix, which has won four games in a row and seven of its past eight. Dario Saric scored 16 points off the bench.

The Bulls pulled within 115-112 with 52.8 seconds remaining but could not get any closer. Phoenix firmly held its lead in the final minute with a driving layup by Booker and four free throws by Paul.

Kyrie Irving collected 31 points, hitting 12 of 25 shots from the floor, and added a season-high 12 assists as Brooklyn rallied in the fourth quarter to beat Houston in New York.

Joe Harris added 14 of his 28 points in the fourth period and sank seven 3-pointers as the Nets moved into first place in the Eastern Conference and improved to 19-3 since Feb. 10.

The news wasn’t all good for Brooklyn, though, as James Harden left the game due to right hamstring tightness. Harden posted 17 points, eight rebounds and six assists before exiting with 4:48 remaining in the third quarter. Kevin Porter Jr. scored 20 points to lead the Rockets.

Malik Beasley’s 3-pointer with 37.8 seconds left capped a comeback from a 13-point, fourth-quarter deficit for Minnesota, which beat New York in Minneapolis.

Julius Randle had 26 points and 12 rebounds for the Knicks, who have lost two straight following a three-game winning streak. RJ Barrett scored 23 points.

Mike Conley scored 26 points and had seven assists to lead Utah over host Memphis for the third time in six days and its seventh straight win overall.

The Jazz were missing star Donovan Mitchell, who did not make the trip. Utah’s initial charter flight to Memphis on Tuesday was forced to return to Salt Lake City shortly after takeoff when a flock of birds struck the plane, reportedly shutting down one of the plane’s engines. Mitchell, who has previously stated that he fears flying, stayed behind in Utah when the team took a subsequent flight to Memphis.

The Jazz also lost Jordan Clarkson (24 points and seven rebounds) when he injured his right foot midway through the fourth quarter. Ja Morant led the Grizzlies with a game-high 36 points while Jonas Valanciunas (16 points, 14 rebounds) and Kyle Anderson (18 points, 11 boards) each recorded a double-double.

Indiana, which has lost two straight games, was led by Myles Turner, who had 15 points, six rebounds and three blocks despite playing much of the second half with five fouls.

Damian Lillard scored 33 points and handed out 10 assists and Portland completed a sweep of a four-game road trip by downing Detroit.

CJ McCollum supplied 24 points and six assists for the Blazers, who finished with an 11-4 record in March. Portland shot 51.2 percent from the field and went 16-for-30 on 3-point attempts.

Jerami Grant’s 30 points led the Pistons, who have lost five of their past six games. Hamidou Diallo contributed 19 points and seven rebounds off the bench, and Mason Plumlee had 18 points.

Doncic sank seven 3-point attempts and shot 11 of 15 on the night as the Mavericks won for the fourth time in six games. Kristaps Porzingis had 19 points, and Dorian Finney-Smith scored 11 points and grabbed nine rebounds.

Jayson Tatum had 25 points, Jaylen Brown 24 and Kemba Walker 22 for the Celtics, who lost their second straight and have dropped seven of 10. Marcus Smart added 17 points.

DeMar DeRozan poured in 26 points, one of seven Spurs to score in double figures, as the host San Antonio got back on track with a win over Sacramento. The teams split a two-game series.

The Spurs’ Derrick White put up 18 points while Rudy Gay scored 16. Jakob Poeltl, Dejounte Murray and Patty Mills hit for 12 apiece, and Keldon Johnson added 11 points for San Antonio. The Spurs have won two of their past three games but are just 2-4 on their current nine-game homestand.

De’Aaron Fox had 20 points while Richaun Holmes scored 14 points and grabbed 15 rebounds for the Kings, who had a five-game winning streak snapped.

Svi Mykhailiuk scored a season-high 22 points, including 10 consecutive points for Oklahoma City in the fourth quarter, in a win over visiting Toronto.

The loss spoiled a big night from Gary Trent Jr., who led the Raptors with a career-high 31 points. Trent, playing his fourth game with Toronto after being traded from Portland, hit six 3-pointers.