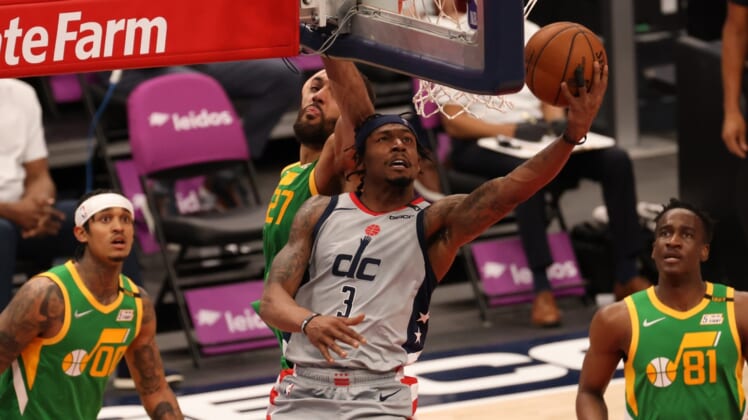 Bradley Beal scored 43 points on 16-of-24 shooting to lead the Washington Wizards to a 131-122 victory over the visiting Utah Jazz on Thursday night.

The Wizards forced 17 turnovers and turned them into 24 points.

Donovan Mitchell scored 42 points and Joe Ingles added a career-high 34 points for the Jazz. Ingles matched a franchise record with eight made 3-pointers. Rudy Gobert chipped in 10 points and 13 rebounds.

Rookie Anthony Edwards scored a season-high 42 points and Karl-Anthony Towns added a season-best 41 to lead Minnesota to a victory at Phoenix.

Towns made five 3-pointers and also contributed 10 rebounds and eight assists as the NBA-worst Timberwolves won for the third time in their past five games. Edwards knocked down four 3-pointers and collected seven rebounds as Minnesota improved to 5-17 on the road.

LeBron James welcomed LaMelo Ball back to town with a 37-point performance, lifting Los Angeles to its fourth straight win at the expense of Charlotte.

Shooting for a third straight and 100th career triple-double, James contributed eight rebounds and six assists to the Lakers’ fourth consecutive win. Ball, the former standout at Chino Hills High in the Los Angeles suburbs, put on a nice show in his Staples Center NBA debut. He led the Hornets with 26 points while also finding time for five rebounds and seven assists.

Schroder backed James with 22 points and a team-high seven assists for the Lakers, who were facing the Hornets for the first time this season. Terry Rozier added 20 points for Charlotte.

Damian Lillard scored 36 points as host Portland beat New Orleans for the second time in three days and a sweep of their three-game season series.

Zion Williamson had 26 points and 10 rebounds, Brandon Ingram scored 19 and Lonzo Ball put up 15 to lead the Pelicans.

The Hawks own a seven-game winning streak for the first time since 2016-17 as they kept Nate McMillan’s record perfect since he became head coach on March 1.

Atlanta also got 23 points and nine assists from Trae Young, who was rested during the fourth quarter, and 19 points and three blocks from John Collins. The Thunder got 19 points from Shai Gilgeous-Alexander. Reserve Ty Jerome made a career-high six 3-pointers to finish with a career-best 18 points.

Reggie Bullock scored 20 points and came up with a big steal with 5.9 seconds left as host New York held on for a victory over Orlando.

Alec Burks led the Knicks with 21 points and added 10 assists. Julius Randle posted his third triple-double of the season with 18 points, a career-high 17 assists and 10 rebounds.