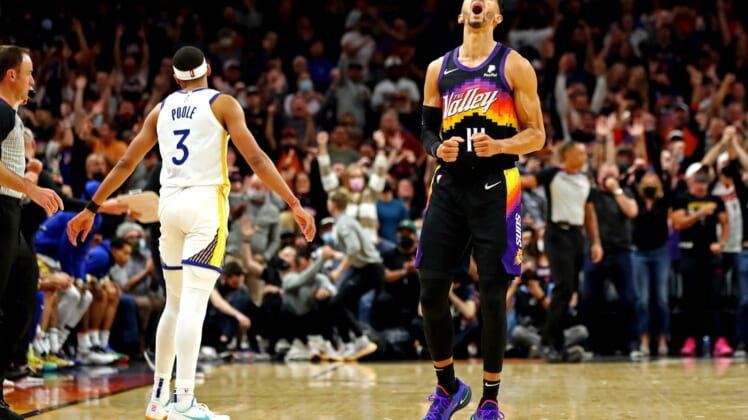 Jae Crowder hit a pair of jumpers, including a 3-pointer, after the Golden State Warriors had closed within one point in the fourth quarter and the host Phoenix Suns went on to win the Pacific Division showdown 104-96 for a franchise-record-tying 17th consecutive victory Tuesday night.

Deandre Ayton (24 points, 11 rebounds) and Chris Paul (15 points, 11 assists) recorded double-doubles for the Suns, who won despite losing Devin Booker to a strained left hamstring in the second quarter. Booker’s injury occurred on a drive to the hoop midway through the second quarter. He was taken to the locker room, and the Suns announced he would not return.

The Suns’ winning streak matches the 17 straight won by the 2006-07 team, bridging December 2006 and January 2007, and also completed the NBA’s first 16-0 calendar month since the Warriors accomplished the feat in November 2015 as part of their record-setting 24-0 start.

Jordan Poole had a game-high 28 points and Otto Porter 16 for the Warriors, whose star, Stephen Curry, was limited to 12 points on 4-for-21 shooting. The clubs will meet in a rematch Friday night in San Francisco.

Russell Westbrook finished with 23 points, six assists and five rebounds, and the Lakers’ bench tallied 58 points as James was scratched from the lineup late due to COVID-19 health and safety protocols.

The Kings’ Richaun Holmes made 12 of 13 shots for a game-high 27 points, De’Aaron Fox scored 17 and Chimezie Metu tallied 14 points and 11 rebounds.

The Nets’ James Harden scored 28 of his 34 points in the first half to lead all scorers and Kevin Durant scored 11 of his 27 in the fourth quarter.