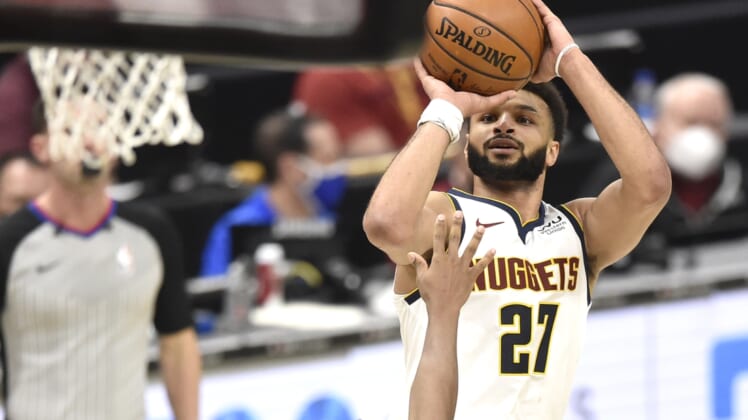 Jamal Murray scored a career-high 50 points Friday, despite attempting no free throws, as the visiting Denver Nuggets earned a 120-103 victory over the Cleveland Cavaliers.

Murray became the first NBA player ever to reach 50 points in a contest without getting to the foul line. He sank 21 of 25 shots, including 8 of 10 from 3-point range, and he added six rebounds.

Murray’s point total eclipsed his previous regular-season career high of 48 points, set in the Nuggets’ 115-107 win over the Boston Celtics on Nov. 5, 2018. He did score 50 in two playoff games against the Utah Jazz last season.

Michael Porter Jr. scored 21 of his 22 points in the first half and Nikola Jokic celebrated his 26th birthday by collecting 16 points, 12 rebounds and 10 assists for the Nuggets. Collin Sexton led the Cavaliers with 23 points, and Jarrett Allen added 20 points and 10 boards.

It was Philadelphia’s second win in succession without Ben Simmons, who sat due to a stomach illness. Zach LaVine led the Bulls with 30 points.

Kemba Walker returned from a one-game sabbatical to score a season-high 28 points and lead Boston over visiting Atlanta. Walker sat out the first of the two-game series for load management of his left knee, a game the Celtics lost.

Walker shot 10-for-16 from the floor, hitting five 3-pointers, and added five rebounds, six assists and three steals. He scored 20 of his points before the break as Boston built a 25-point halftime lead.

Trae Young, who scored 40 against Boston on Wednesday, led Atlanta with 31 points and 11 assists. Clint Capela had 24 points, 15 rebounds and four blocked shots.

Evan Fournier had 28 points and Terrence Ross 24 for the Magic, who blew a 17-point lead before rallying from 13 down in the fourth quarter.

Devin Booker scored 23 points and Chris Paul and Deandre Ayton each had a double-double as Phoenix won at New Orleans.

The Suns trailed by 11 points at the end of the third quarter but outscored the Pelicans 41-12 in the fourth quarter to win for the seventh time in eight games. Paul had 15 points and 19 assists, Ayton had 16 points and 16 rebounds, and teammate Jae Crowder scored 20.

Brandon Ingram scored 25, Zion Williamson had 23 and Lonzo Ball added 21 to lead New Orleans, which has lost five of its past six games.

Donovan Mitchell scored 35 points to lead Utah, which lost for just the second time in the past 22 games. Bojan Bogdanovic added 23 points, and Jordan Clarkson contributed 19.

Norman Powell scored 22 of his 31 points in the first half and Toronto gave up an early lead before coming back to defeat host Minnesota.

Terence Davis, who did not play until the fourth quarter, made a 3-pointer to break a tie with 30.8 seconds to play. He completed the scoring by sinking two free throws with 18.8 seconds left to finish with 11 points. He played all but 24 seconds of the fourth quarter.

Karl-Anthony Towns amassed 19 points and 13 rebounds for the Timberwolves, who have lost three straight and seven of their past eight.

Ja Morant had 29 points and Memphis opened up a 21-point lead in the first half and went on to an easy victory over visiting Detroit.

Jonas Valanciunas produced 17 points and 15 rebounds for the Grizzlies, and Kyle Anderson had 16 points. Dillon Brooks missed the game due a thigh injury.

The Pistons’ Jerami Grant, who scored a career-high 43 against Chicago on Thursday, was limited to 16 points on 5-for-20 shooting. Delon Wright also had 16 points, and Josh Jackson tossed in 15 with seven rebounds.

Milwaukee’s 98 points were its second lowest of the season, the second night in a row the Bucks were held under 100. However, the Bucks held an opponent under 90 points for the first time all season.