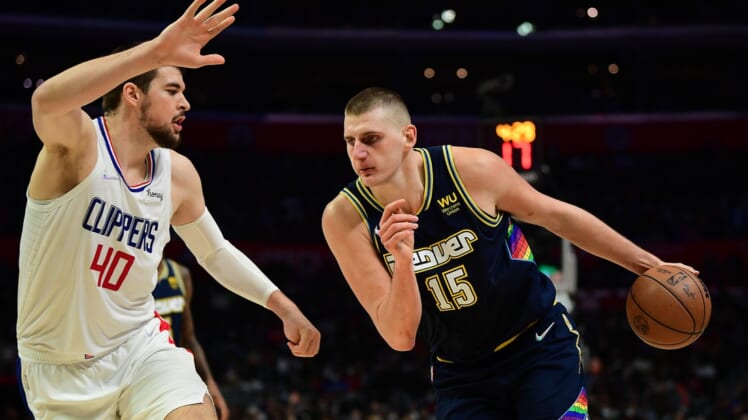 Nikola Jokic had 26 points, matched his career best of 22 rebounds and also contributed eight assists as the visiting Denver Nuggets rallied to beat the Los Angeles Clippers 103-100 on Sunday night.

Yuta Watanabe had 26 points and 13 rebounds for Toronto. Chris Boucher had 21 points, D.J. Wilson scored 15 points and Svi Mykhailiuk had 10.

Desmond Bane hit two of his four 3-pointers in a third-quarter explosion that allowed visiting Memphis to snap a three-game losing streak with a shellacking of Sacramento.

Davis had 15 points in 16 minutes, Fox 12 in 30 and Bagley three in 10 for the Kings, whose 25-point margin of defeat equaled their largest at home this season.

Zach LaVine scored 32 points in his return from a two-game absence and DeMar DeRozan added 24 as Chicago beat visiting Indiana.

Nikola Vucevic had 16 points and 15 rebounds for Chicago, which won its third straight and avenged a 32-point loss to the Pacers on Nov. 22. The Bulls led by as many as 18 in the first half. LaVine returned from the league’s health and safety protocols and was 12-of-18 shooting from the field, including 5-of-9 from 3-point range.

Caris LeVert had 27 points and nine assists to lead Indiana. Myles Turner added 19 points while Chris Duarte scored 12 of his 16 points in the second half. Domantas Sabonis returned after missing one game due to a right-calf injury and finished with 14 points and 16 rebounds. Justin Holiday added 10 points for the Pacers.

The Spurs ran away from Detroit in the first half and cruised to the win, their third straight. San Antonio produced a near-perfect half despite playing without Dejounte Murray, who missed the game because of health and safety protocols.

The Pistons were missing coach Dwane Casey and 11 of their regular roster players because of either injury or health and safety protocols and had only nine players in uniform. Detroit was without 67 percent of its total scoring for the season.

Joel Embiid had 36 points and 13 rebounds to lift Philadelphia past host Washington.

Tobias Harris scored 23 points and Furkan Korkmaz contributed 14 for the Sixers. Tyrese Maxey scored 13 and Seth Curry had 11. The Sixers were without Andre Drummond, Danny Green and Shake Milton in health and safety protocols.

Washington was missing Bradley Beal, Kentavious Caldwell-Pope and Raul Neto in health and safety protocols. Spencer Dinwiddie led the Wizards with 17 points and Montrezl Harrell scored 15 before being ejected. Davis Bertans had 14 and Kyle Kuzma chipped in with 12 points and 10 rebounds.

Rookie Aaron Wiggins had 24 points on 8-of-10 shooting for the Thunder, who have won four of five. The loss snapped the Pelicans’ four-game winning streak.

New Orleans’ Brandon Ingram left the game late in the first quarter with left Achilles soreness and did not return. Josh Hart scored a season-best 29 points to lead the Pelicans while Garrett Temple had a season-high 22 off the bench.

Jimmy Butler posted 17 points and 11 rebounds in his return from an eight-game absence, leading host Miami over Orlando.

Third-string center Omer Yurtseven collected 16 points and a game-high 15 rebounds while making his first career start due to injuries to Bam Adebayo and Dewayne Dedmon. Miami’s Kyle Lowry, who entered the game ranking fifth in the NBA in assists average (8.2), was placed on the COVID-protocol list just prior to the game.