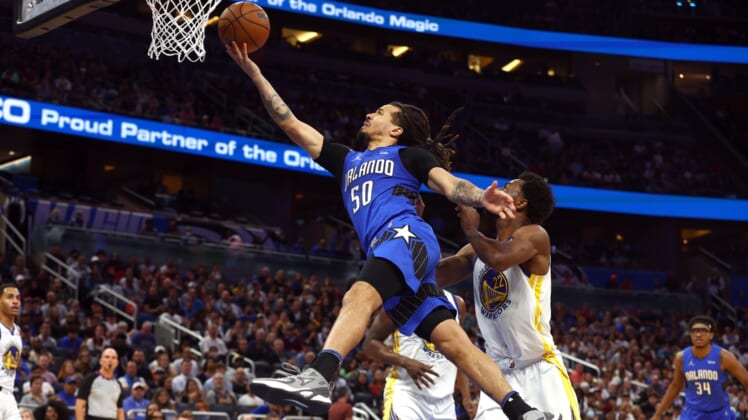 Mo Bamba hit a go-ahead 3-pointer with 52.2 seconds left and the host Orlando Magic handed the Golden State Warriors their third straight loss with a 94-90 comeback victory on Tuesday night.

Following the Warriors’ unsuccessful coach’s challenge for a shooting foul, Franz Wagner hit three free throws with 13.2 seconds remaining for a 92-88 lead for the Magic. The rookie out of Michigan added a dunk off an inbounds play moments later to complete the scoring. Wagner finished with 18 points.

The Warriors’ Jordan Poole scored 12 of his game-high 26 points in the third quarter to go with six assists, and Otto Porter Jr. contributed 14 points and 15 rebounds. Klay Thompson made a pair of 3-pointers and scored 15 points for the Warriors, who were playing their second game since star guard Stephen Curry sprained his left foot.

Jrue Holiday finished with a game-high 27 points as Milwaukee earned a win over visiting Chicago to record its fifth consecutive home win.

Holiday added seven assists and cashed in on 12 of his 17 field-goal attempts to lead the Bucks over their division rival for the third time this season. Giannis Antetokounmpo supplied 25 points and 17 rebounds, and reserve Pat Connaughton chipped in 14 points.

Nikola Vucevic finished with a team-high 22 points and seven rebounds on 9-of-15 shooting for Chicago. DeMar DeRozan and Zach LaVine each added 21 points, and Ayo Dosunmu tallied seven off the bench.

Young overcame a sluggish start to make 13 of 25 shots from the floor, including 7 of 15 from 3-point range. His point total served as a career high at the Garden, eclipsing his 42 points in December 2019.

Bogdan Bogdanovic scored a season-high 32 points and New York native Kevin Huerter added 14 for the Hawks, who have won five of their past seven games. Atlanta also averted a sweep in the four-game season series.

Monte Morris finished with 15 points, Austin Rivers had 11 and Will Barton added 10 for the Nuggets, who had lost four of their previous six games.