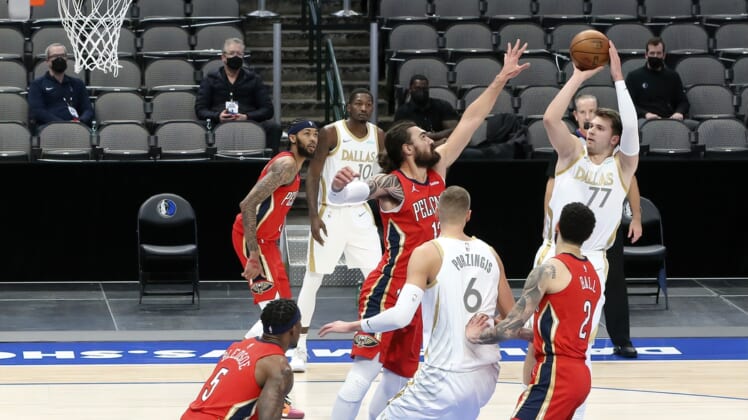 Doncic made 17 of 30 field-goal attempts, including 5 of 8 from 3-point range, and Porzingis was 13 of 21, including 8 of 13 from beyond the arc. Dorian Finney-Smith added 14, Jalen Brunson had 13 and Josh Richardson 11 as the Mavericks won a shootout with the Pelicans’ Zion Williamson and Brandon Ingram.

Four players for NBA-leading Utah scored at least 25 points as the Jazz beat Milwaukee in Salt Lake City for their sixth straight win and their 17th victory in 18 games.

Rudy Gobert and Joe Ingles each scored 27 points to lead the Jazz. Donovan Mitchell finished with 26 despite 6-of-20 shooting from the field, and Jordan Clarkson continued his stellar play off the bench with 25.

Lou Williams (17 points), Ivica Zubac (12 points) and Reggie Jackson (11) also scored in double digits for Los Angeles, which won its second game in a row after losing three of the previous four.

Zach LaVine led the Bulls with 26 points on 11-for-21 shooting. Coby White and Tomas Satoransky each contributed 17 points for Chicago, which has lost four of its past six games and seven of its past 10.

Justin Jackson scored 20 points, Hamidou Diallo and Al Horford added 16 each and Luguentz Dort finished with 15 for the Thunder.

Read More: RECAP: Nuggets rally from 19 down to dump Thunder

Anthony Davis had 35 points and nine rebounds as Los Angeles ran its winning streak to seven games with a victory over visiting Memphis.

Davis, who returned after a two-game absence caused by Achilles soreness, made 16 of 27 shots from the floor as the Lakers rallied from an early 20-point deficit to prevail. LeBron James had 28 points, nine rebounds and eight assists, and Kyle Kuzma contributed 20 points and 10 rebounds.

Grayson Allen scored 23 points and Jonas Valanciunas and Ja Morant each scored 22 for the Grizzlies, who have dropped five of their past six contests. Morant dished out 10 assists.

DeMar DeRozan scored 22 of his 23 points in the first half and San Antonio had seven players score in double figures and led by as many as 42 points in a blowout victory at Atlanta.

DeRozan shot 7-for-11 from the field and added eight assists and six rebounds. The Spurs got 20 from Keldon Johnson, 16 points and six rebounds from Dejounte Murray, and 14 points, 12 rebounds and three blocks from Jakob Poeltl. It was their fourth win in five games.

Atlanta, which has lost two straight and five of its last six, was led by Trae Young with 25 points and Clint Capela with 14 points and 11 rebounds. Rookie Skylar Mays came off the bench to make four 3-pointers, including his first career field goal, and he scored a season-high 20 points.

Rookie reserve Saddiq Bey scored a career-high 30 points, making all seven of his 3-point attempts in the process, and visiting Detroit held off Boston.

Bey set a Pistons single-game rookie record for 3-pointers, and he also pulled down 13 rebounds. Delon Wright had 22 points and seven assists for the Pistons while Jerami Grant supplied 15 points.

Jayson Tatum carried Boston with 33 points, 11 rebounds and seven assists. Jaylen Brown had 27 points and six rebounds. The Celtics rested starting Kemba Walker, and Semi Ojeleye left the game in the second half with a sore right knee.

Vucevic found time for a game-high-tying nine rebounds and Terrence Ross netted 18 points for the Magic, who snapped a three-game losing streak.

Buddy Hield had 19 points to lead the Kings, who have lost two straight after winning four in a row. Hassan Whiteside had 16 points while Tyrese Haliburton had 14 to go with a team-high seven assists for Sacramento, which ruled out De’Aaron Fox (bruised knee) and Marvin Bagley III (left calf soreness) shortly before game time.

Rozier’s backcourt mate LaMelo Ball contributed 20 points and 11 rebounds. Cody Zeller added 17 points for the Hornets while Gordon Hayward had 14 points despite shooting 5-for-21 from the field.

Malik Beasley racked up 31 points and Karl-Anthony Towns, in his second game back from an extended coronavirus-related absence, notched 25 points and eight rebounds for the Timberwolves, who have a four-game losing streak.

The Wizards held out Bradley Beal, the NBA’s top scorer at 32.8 points per game, for his first rest day this season.

Gary Trent Jr. scored 26 points and Carmelo Anthony added 23 as Portland jumped out to an early lead and stormed past visiting Cleveland.

Enes Kanter contributed 21 points and 13 rebounds and Damian Lillard had 20 points for the Blazers, who finished a 3-0 homestand.

Collin Sexton scored 25 points while Jarrett Allen had 22 for the Cavaliers, who have lost six in a row and seven of nine.