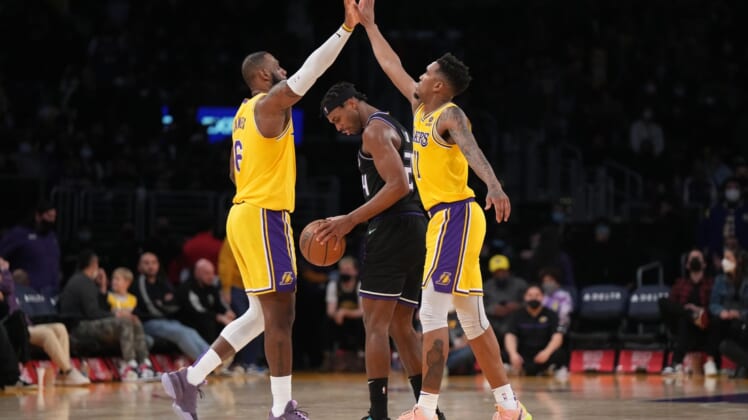 LeBron James and Malik Monk combined for 55 points, including five 3-pointers in a fourth-quarter rally that allowed the host Los Angeles Lakers to overtake the Sacramento Kings 122-114 on Tuesday night.

James finished with a game-high 31 points and Monk had 24 as the Lakers won a third straight to open a five-game homestand. De’Aaron Fox scored a team-high 30 points and Buddy Hield tallied 26 for the Kings, who lost for just the second time in their last five games.

After James and Hield had split four consecutive lead-changing 3-pointers, Monk and Tyrese Haliburton exchanged two-point hoops. Monk gave the Lakers the lead for good, 112-110, with a 3-pointer with 2:50 to go.

Fred VanVleet scored 24 of his 33 points in the first half and had seven assists as Toronto defeated visiting San Antonio.

VanVleet, who was 7 of 14 on 3-point attempts, has scored more than 30 points in each of the past three games as the Raptors have improved their record to .500 for the season, at 17-17. Pascal Siakam added 18 points, 12 rebounds and five assists for the Raptors, who have won three straight. Gary Trent Jr. contributed 21 points.

Former Raptor Jakob Poeltl scored 19 points and grabbed 12 rebounds for the Spurs, who have lost four in a row. Devin Vassell and Joshua Primo each scored 15 points.

Morant, the Western Conference Player of the Week, made several crucial plays in the waning moments to send Memphis to its season-high sixth straight win.

Cleveland’s Darius Garland recorded 27 points and 10 assists in his return from a four-game absence due to health and safety protocol. Jarrett Allen collected 22 points and 12 rebounds for the Cavaliers, who have lost four of their last five games.

Julius Randle returned from the COVID-19 list to post a double-double — 30 points and 16 rebounds — and RJ Barrett scored 32 points as host New York fended off Indiana.

Barrett scored 19 points in the first quarter for the Knicks, who snapped a two-game losing streak. Alec Burks added 14 points and Immanuel Quickley tallied 11 points off the bench.

Paul had 11 points and 15 assists, Mikal Bridges scored 23, Cameron Johnson added 18, Bismack Biyombo had 16 and Jalen Smith had 12. The Suns overcame the absence of coach Monty Williams, starters Deandre Ayton and Jae Crowder and backups JaVale McGee and Abdel Nader, all of whom were in the health and safety protocols.

Devonte’ Graham scored 28, Jonas Valanciunas had 25 points and 16 rebounds, Brandon Ingram scored 16 and Josh Hart had 15 points and 11 rebounds for the Pelicans.