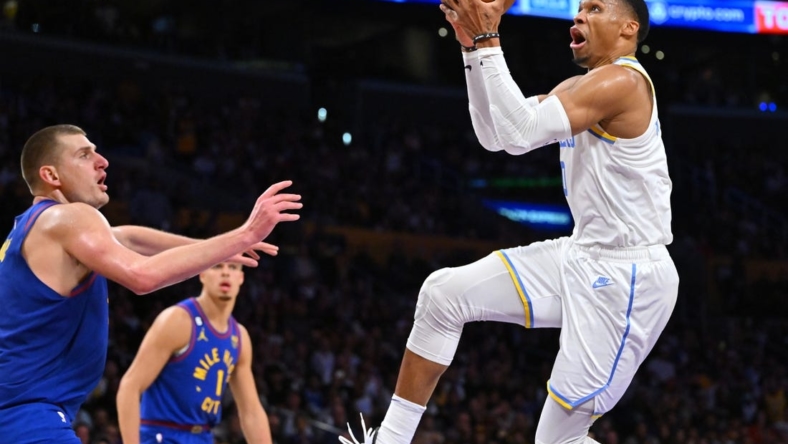 LeBron James scored 26 points, Anthony Davis added 23 to go with 15 rebounds and the host Los Angeles Lakers beat the Denver Nuggets 121-110 on Sunday night for their first win in six games this season.

The Nuggets played without Bones Hyland, who was injured during warmups.

Cade Cunningham contributed 23 points, 10 rebounds and nine assists for Detroit, while Bojan Bogdanovic had 21 points. Bogdanovic agreed to a two-year contract extension prior to the contest. Rookie Jaden Ivey added 15 points in the Pistons’ first win since opening night.

Stephen Curry topped Golden State with 32 points and Jordan Poole had 30 points. The Warriors rested starting guard Klay Thompson in the second game of a back-to-back.

Williamson, returning from a two-game absence due to a hip contusion, fell three assists short of his first career triple-double.

Brown also grabbed 10 rebounds, Tatum hit five 3-pointers and Brogdon finished with a season high in points for the Celtics, who snapped a two-game skid. Boston led by as many as 25 in the fourth quarter.

Kristaps Porzingis was a rebound away from a double-double in the first half and went on to finish with 17 points and 13 rebounds to pace the Wizards, who have lost back-to-back games.

Donovan Mitchell continued his superb start with his new team by totaling 38 points and 12 assists as host Cleveland heated up down the stretch and rallied to beat New York.

Mitchell, who was rumored to be traded to the Knicks before Cleveland obtained him from Utah on Sept. 1, finished with his fifth game of at least 30 points to help the Cavaliers get their fifth straight win. Kevin Love added 29 and tied a career high with eight 3-pointers.

Jalen Brunson and Evan Fournier led the Knicks with 16 apiece. RJ Barrett and Julius Randle added 15 apiece and Isaiah Hartenstein finished with 12 as the Knicks missed 13 of 20 shots in the fourth and dropped their second straight.

Luka Doncic scored 30 of his 44 points in the first half to lift host Dallas to a victory over Orlando.

Doncic recorded his sixth consecutive outing of at least 30 points after making 17 of 26 shots from the floor. The Mavericks have alternated losses and wins over their first six games of the season.

Orlando rookie Paolo Banchero finished with 18 points, marking the first time this season that he has been held under 20. Bol Bol collected 16 points and 11 rebounds, while reserve R.J. Hampton and Wendell Carter Jr. chipped in 15 points apiece.

Keldon Johnson scored 25 points and Doug McDermott added 23 off the bench as short-handed San Antonio defeated visiting Minnesota in the third game between the teams in seven days.

The Spurs were up by 15 points heading into the fourth quarter before Minnesota pulled to within three early in the period. But San Antonio pushed its advantage to 10 after a McDermott 3-pointer with 5:03 remaining, and Johnson iced the game with a triple and two free throws in the final minute.

Keita Bates-Diop scored 18 points for San Antonio, while Tre Jones hit for 10 and Jakob Poeltl grabbed a game-high 14 rebounds. Karl-Anthony Towns led the Timberwolves with 26 points and 11 rebounds, while Anthony Edwards scored all 18 of his points in the second half.

Booker shot 14 of 24 overall despite missing 6 of 7 from 3-point range to pace seven Suns in double figures. Phoenix led by as many as 12 points in the first half but repeatedly had to stave off spurts from the Rockets before getting the lead in double digits for good in the final three minutes.

Chris Paul finished with 10 points and 15 assists, and Cameron Johnson added 19 points on 5-of-11 3-point shooting for the Suns, who shot 53.6 percent. Kevin Porter Jr. led the Rockets with 26 points and added eight rebounds and six assists, while Alperen Sengun paired 16 points with nine boards.