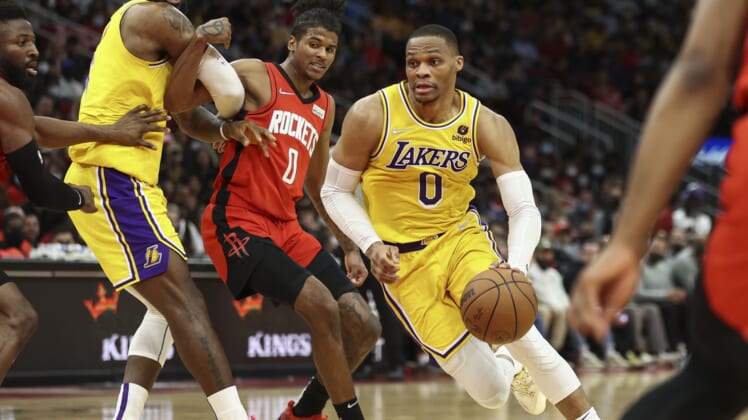 LeBron James posted a 30-point triple-double and paced four 20-point scorers for the Los Angeles Lakers, who snapped a five-game skid with a 132-123 road win over the host Houston Rockets on Tuesday.

James finished with 32 points, 11 rebounds and 11 assists for his third triple-double of the season but had ample support. Russell Westbrook chipped in his seventh triple-double (24 points, 12 rebounds, 10 assists) while Malik Monk added 25 points and Carmelo Anthony 24 off the Lakers’ bench.

Rookie Jalen Green scored 14 of his team-high 24 points in the fourth quarter for the Rockets, who dropped their fifth consecutive game. Kevin Porter Jr. and Christian Wood scored 22 apiece for Houston, which was outrebounded 48-30 and fell despite shooting 53 percent overall.

Joel Embiid scored 36 points, hitting the go-ahead layup with 51.3 seconds left in the game, and grabbed 11 rebounds as visiting Philadelphia held off Toronto.

Tobias Harris added a triple-double for the 76ers with 19 points, a career-best 10 assists and 12 rebounds. He made four free throws in the final minute. Georges Niang scored eight of his 19 points in the fourth quarter, helping Philadelphia win for the third time in four games.

Chris Boucher had 28 points and matched his career best with 19 rebounds for the Raptors, who have lost two straight. Toronto also got 28 points from Pascal Siakam, who returned from safety and health protocols, as did Gary Trent Jr., who scored 19.

Bobby Portis hit five 3-pointers and scored 19 points for the Bucks, who have won 10 straight games against the Magic. Jrue Holiday finished with 18 points and 10 assists as the defending NBA champions won their fourth in a row overall.

Orlando, which dropped to 2-12 at home, has lost three straight games since posting back-to-back wins for the first time this year. Magic rookie Franz Wagner scored a career-high 38 points, 10 more than his previous best.

The Wizards were led by Spencer Dinwiddie, who had 24 points and 11 assists. Kyle Kuzma scored 22 points, and Davis Bertans added 19.

Mitchell Robinson recorded 14 points and 18 rebounds for New York, which squandered a 17-point lead in the first half before gradually pulling away to defeat undermanned Minnesota in Minneapolis.

Julius Randle finished with 13 points and 15 rebounds as the Knicks won their second straight — their first winning streak since a three-game run from Oct. 26-30. Starters Evan Fournier scored 13 and points, respectively, while Quentin Grimes added 11 off the bench.

Malik Beasley scored 20 points for the Timberwolves, whose top three scorers — Karl-Anthony Towns, Anthony Edwards and D’Angelo Russell — remained sidelined. Towns and Russell are in COVID-19 protocols, while Edwards was cleared from protocols but didn’t play as he looks to regain his fitness.

Herbert Jones scored a season-high 26 points and Garrett Temple poured in all 17 of his points in the fourth quarter as host New Orleans rallied to defeat Cleveland.

Devonte’ Graham scored 18 points and Jonas Valanciunas returned from a two-game absence due to a non-COVID illness to get 15 points and 10 rebounds for the Pelicans. New Orleans won for the fifth time in six games despite trailing by 23 points late in the first quarter.

Ricky Rubio had 27 points, 13 rebounds and nine assists, Kevin Love scored 24 points and Evan Mobley had 22 for the Cavaliers, who have lost two of their past three.