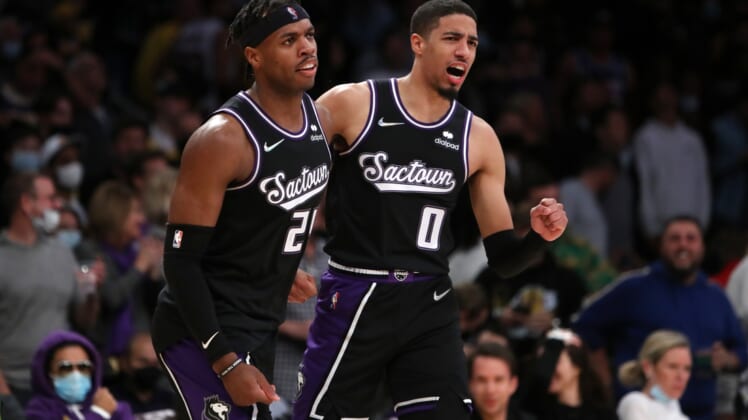 De’Aaron Fox recorded 34 points and eight assists and Buddy Hield scored 25 points off the bench as the Sacramento Kings notched a dramatic 141-137 triple-overtime victory over the host Los Angeles Lakers on Friday night.

Tyrese Haliburton registered 19 points, nine assists, six rebounds and five steals for the Kings, who recovered from a 13-point, fourth-quarter deficit to improve to 2-1 under interim coach Alvin Gentry.

Marvin Bagley’s inside basket and Fox’s hoop gave Sacramento a 135-128 lead with 1:52 left in the third overtime. The Lakers moved within 139-137 on Carmelo Anthony’s 3-pointer with 9.4 seconds left before Hield hit two free throws with 6.5 seconds remaining to close it out.

Down by four with 37.4 seconds left, New Orleans got two free throws from Ingram and a key rebound from Jonas Valanciunas. Ingram fed Graham for the 28-foot pull-up jumper as New Orleans scored the final five points to snap a seven-game road losing streak.

Bojan Bogdanovic led the Jazz in scoring with 23 points, including five 3-pointers, but Donovan Mitchell only had 16 points on 6-for-21 shooting and Rudy Gobert had just nine points with 10 rebounds.

Ja Morant left in the first quarter with a left knee injury, and Memphis never recovered as Atlanta cruised to a road win.

Morant came up hobbled after dribbling out of a double-team. The Grizzlies star avoided putting weight on his left leg after the non-contact play, and he returned to the bench wearing street clothes during the third quarter. The team announced following the game that Morant sustained a knee sprain.

With its leader in both scoring and assists this season out, Memphis fell into a deep hole. Atlanta built a 14-point lead by halftime, then blew the game open with a 43-18 third quarter. Trae Young paced Atlanta to its seventh consecutive win with 31 points and 10 assists.

Stephen Curry’s game-high 32 points led Golden State past Portland in San Francisco. The win was the Warriors’ 10th straight at home, with each of the 10 coming by 10 or more points.

Andrew Wiggins shot 10-for-16 in a 25-point performance for the Warriors, and Draymond Green contributed 12 points, 12 assists and eight rebounds.

The Trail Blazers, who fell to 1-9 on the road, got a team-high 19 points from reserve Anfernee Simons.

Eric Bledsoe tossed in 15 points in a game the Clippers controlled virtually from the opening tip. Paul George added 12 points, five rebounds, four assists and three steals for the Clippers, who had lost four of their previous six games.

Jerami Grant had 20 points, 10 rebounds and three assists for the Pistons, who lost their fifth straight game.

Kelly Oubre Jr. poured in 27 points off the bench and Charlotte had the hot hand, making 23 shots from 3-point range in a victory against visiting Minnesota.

The Hornets put up 40 shots from behind the arc. Minnesota was 11-for-35 on 3-point attempts.

Karl-Anthony Towns led the Timberwolves with 25 points while teammate Malik Beasley and D’Angelo Russell each scored 18.

Devin Booker’s 3-pointer eight minutes into the game gave Phoenix the lead for good, and the visiting Suns gradually pulled away from New York.

Booker finished with a game-high 32 points for the Suns, who picked up their 15th victory in a row to equal the second-longest winning streak in franchise history.

DeMar DeRozan scored 17 of his 23 points in the second half and Nikola Vucevic had 16 points and eight rebounds in his return to Orlando, helping Chicago break a two-game losing streak.

The Bulls’ Coby White, playing his seventh game of the season, came off the bench to score a season-high 20 points on 9-for-11 shooting. Wendell Carter Jr. paced the Magic with 26 points.

Domantas Sabonis scored nine of his 23 points in the fourth quarter and grabbed 18 rebounds as Indiana defeated Toronto in Indianapolis.

The Pacers got double-doubles from Myles Turner (17 points and 10 rebounds) and Malcolm Brogdon (11 points and 12 assists).

Dejounte Murray scored 29 points, eight of them in a decisive late-fourth quarter run, and pulled down 11 rebounds as San Antonio outlasted visiting Boston to snap a six-game losing streak.

Down by seven with three minutes to play, the Spurs scored the game’s final 15 points. The Spurs led by 16 points after the first quarter and 15 at halftime.

Jayson Tatum shook off first-half shooting doldrums to post 24 points for the Celtics, 21 of those after halftime, and 12 rebounds. Jaylen Brown added 16 points and Marcus Smart had 13 for Boston, which has dropped two straight.

Kentavious Caldwell-Pope and Bradley Beal scored 20 points each to help Washington hold on for a win over host Oklahoma City.

The Thunder had a chance to win the game at the buzzer, but Shai Gilgeous-Alexander’s running 3-point attempt from just outside the arc clanged off the back of the rim as the buzzer sounded to give the Wizards just their second victory in six games. Caldwell-Pope was 8 of 13 from the floor, while Daniel Gafford had a career-high eight blocks for the Wizards.

Oklahoma City has lost a season-high five in a row. Luguentz Dort led the Thunder with 21 points. Gilgeous-Alexander, returning to the lineup after missing two consecutive games with a sprained right ankle, had 15 points, eight rebounds and nine assists.