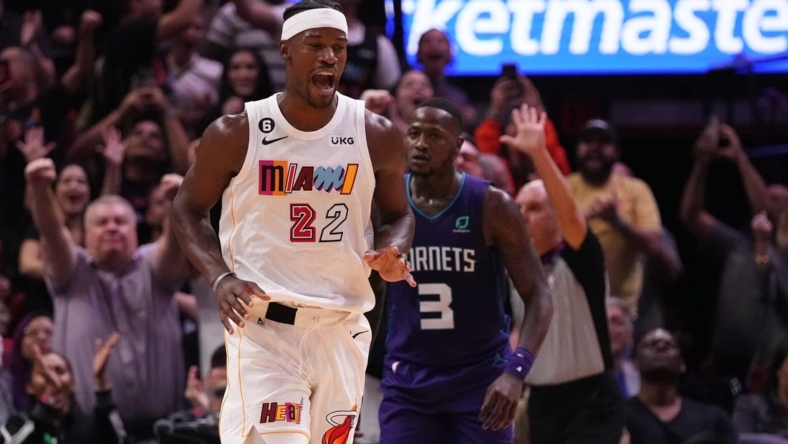 Jimmy Butler posted 35 points, 10 rebounds and eight assists to lead the host Miami Heat to a 117-112 overtime win over the Charlotte Hornets on Thursday night.

Butler also made 13 of 15 free throws, including going 1-for-1 in an overtime period that saw the Heat go 9-for-9 from the line.

The Hornets, who have lost seven straight games, were led by Kelly Oubre’s season-high 29 points on 11-for-20 shooting, including 7-for-13 on 3-pointers. In his two previous games, he made just two of his 18 long-distance attempts.

Kyle Kuzma scored a season-high 36 points to go along with 11 rebounds and six assists to propel Washington past visiting Dallas.

Kuzma made 14 of 26 shots from the floor, including 5 of 11 from 3-point range. Rui Hachimura had 23 points and eight rebounds to help Washington earn its second straight win following a 1-5 stretch.

Dallas’ Spencer Dinwiddie finished with 33 points after making 7 of 12 from 3-point range. Luka Doncic recorded 22 points, nine rebounds and six assists for the Mavericks, who have lost two in a row.

Anfernee Simons added 23 points as Portland improved to 4-1 on its six-game road trip. Former Pelican Josh Hart had 17 for the Trail Blazers, who played without Damian Lillard (calf) and center Jusuf Nurkic (adductor).

Zion Williamson scored 29 to lead New Orleans. Trey Murphy III added 16 for the Pelicans, who fell for the third time in four games.

Trae Young scored 15 of his 26 points in the first quarter and host Atlanta sent Philadelphia to its third loss in four games.

Young made only 7 of 21 field goals and was just 2-for-8 on 3-point tries, but was perfect on 10 free-throw attempts and had seven assists. Clint Capela added 18 points and a season-high 20 rebounds.

Joel Embiid led the 76ers with 26 points and 13 rebounds. The two clubs play again on Saturday in Philadelphia.