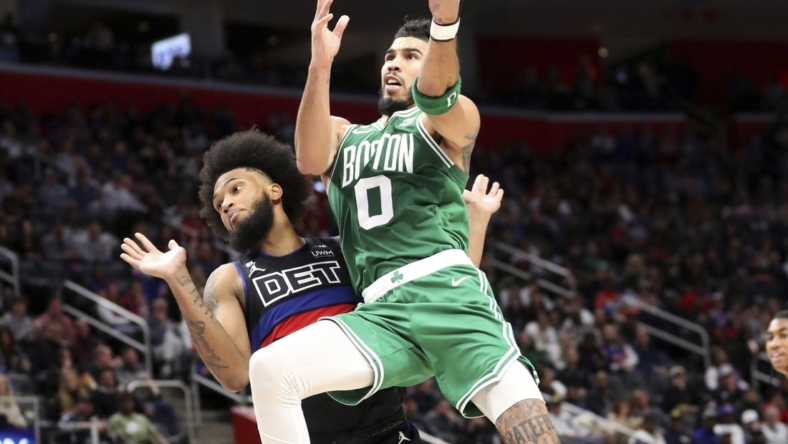 Jayson Tatum poured in 43 points and grabbed 10 rebounds, and the visiting Boston Celtics extended their winning streak to six games by downing the Detroit Pistons 117-108 on Saturday night.

Detroit was still clinging to a slim lead until Boston went on a 13-4 run in the last 4:03 of the third for an 89-81 advantage. Williams finished off that spurt with a 3-pointer. Tatum doubled his first-half point total to reach the 30-point mark. Tatum drained a jumper with 8:27 left to play to provide the first double-digit lead of the game at 98-87.

The Pistons played without Cade Cunningham (shin), while Boston was without Jaylen Brown (knee).

Luka Doncic collected 42 points, 13 rebounds and 10 assists, and Spencer Dinwiddie made six 3-pointers to fuel host Dallas to a victory over Portland.

Doncic made 13 of 22 shots from the floor and 15 of 18 from the foul line as a means to atone for what he labeled as a pair of “awful” performances during Dallas’ two-game losing skid. Dinwiddie finished with 20 points, seven rebounds and six assists. Jerami Grant scored a season-high 37 points and Damian Lillard recorded 29 points and 12 assists for the Trail Blazers, who saw their three-game winning streak come to a halt.

Dinwiddie drained a pair of 3-pointers to stake Dallas to a 109-106 lead with 1:52 remaining in the fourth quarter. Lillard answered with a layup before Dinwiddie converted again from beyond the arc. Dorian Finney-Smith added another 3-pointer to extend the Mavericks’ lead to 115-108 with 54.2 seconds left to seal the win.

Seth Curry scored 14 points in the fourth quarter and hit the 3-pointer that gave surging Brooklyn the lead for good in a win over host Los Angeles.

Curry finished with 22 points off the bench for the Nets, who improved to 4-1 without Kyrie Irving. The guard was suspended by the team for at least five games on Nov. 3 after he tweeted a link to an anti-Semitic film and then refused to apologize for doing so. Kevin Durant scored a game-high 27 points while Nic Claxton (13 points, 14 rebounds) had a double-double for the Nets.

Ivica Zubac (16 points, 15 rebounds) recorded a double-double for the Clippers, who had a two-game winning streak snapped. Paul George scored 17 points while Norman Powell (16 points) and John Wall (14 points) each got into double figures off the bench. Claxton hit a layup and Royce O’Neale sank a 3-pointer to extend Brooklyn’s lead to 104-88 with 2:22 left. Los Angeles got no closer than 13 the rest of the way.

Jordan Clarkson paced the Jazz with 18 points, but Utah’s defense couldn’t contain Washington from outside. The Wizards took a page from the Jazz, one of the NBA’s top 3-point-shooting teams, by draining 16 of 36 beyond the arc, including four apiece for Porzingis and Corey Kispert.

The Wizards took a 15-point lead in the third quarter and had answers every time Utah made a push in the final quarter. Kelly Olynyk hit a 3 as the Jazz pulled within 114-107, but the Wizards then scored five straight to clinch the win.

The Pacers fell behind 67-52 early into the third quarter before going on a 20-6 run. Despite Toronto briefly pushing its lead back to 10 points, Indiana remained within striking distance long enough into the fourth quarter to ultimately take control. The Pacers dominated the final period, 36-14, punctuated with a decisive 23-5 run to close the game.

Bennedict Mathurin finished with 15 points off the bench, and Myles Turner recorded 19 points and 10 rebounds for Indiana. O.G. Anunoby led all scorers with 26 points, but his 2-of-7 shooting from 3-point range reflected an overall issue for Toronto in the loss. The Raptors shot just 7 of 35 from long range and finished worse than 40 percent from the floor overall (37-for-94).

Tyrese Maxey had 26 points and nine assists, Tobias Harris scored 21 points and Shake Milton had 11 for Philadelphia, which avenged a 104-95 loss to the Hawks on Thursday in Atlanta. Trae Young led the Hawks with 27 points and 11 assists, while Dejounte Murray scored 23 points, DeAndre Hunter had 15 and Clint Capela recorded 14 points and 15 rebounds.

Atlanta trailed by as many as 27 points midway through the third quarter before closing on a 22-10 run to cut the deficit to 99-84. The Hawks carried their momentum into the fourth quarter and pulled within 113-107 on AJ Griffin’s 3-pointer with 2:28 remaining, but Philadelphia quickly regained control with five straight points, including Matisse Thybulle’s trey with 1:39 left.

Max Strus poured in 31 points and host Miami had far too much offensive firepower for Charlotte.

Bam Adebayo had 24 points, and Jimmy Butler and reserve Gabe Vincent both posted 20 points as the Heat won their second game in a row after a two-game skid.

The Hornets had good news with the season debut of standout guard LaMelo Ball, who had missed the first 13 games with an injury. Despite his 15 points, Charlotte dropped its eighth game in a row.

Larry Nance Jr. added 22 points, Brandon Ingram scored 20 and Jose Alvarado had 12 for the Pelicans, who scored a season-low 95 points two nights earlier in a loss to Portland.

Jalen Green scored 33 points, Kevin Porter Jr. added 23 and Eric Gordon 15 for the Rockets, who lost for the eighth time in nine games. Alvarado and Porter were called for double technicals and ejected for an altercation in the final seconds.