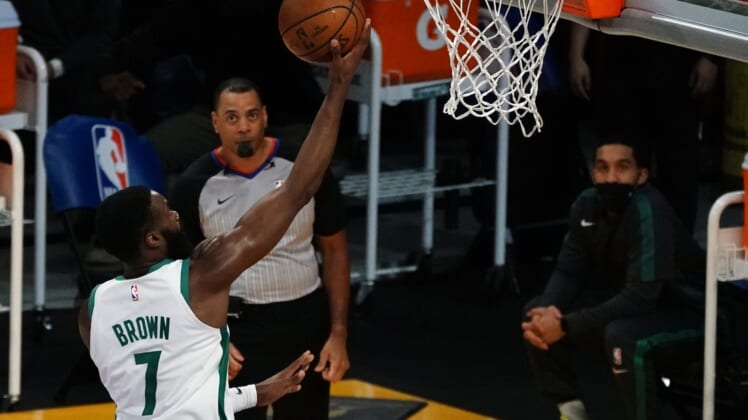 Jaylen Brown scored 40 points and grabbed nine rebounds as the Boston Celtics closed out a perfect road trip with a 121-113 victory over the Los Angeles Lakers on Friday.

Brown finished 17 of 20 from the field and at one point made 11 straight shots. The Celtics, who ended 3-0 on the trek and earned their fifth straight win overall, never trailed. Marcus Smart and Payton Pritchard each scored 15 points.

Getting the start in place of Andre Drummond (bruised right big toe), Los Angeles center Marc Gasol had a hot shooting night, finishing 4 of 6 from the 3-point arc and totaling 18 points. Talen Horton-Tucker added 19 points for the Lakers, who allowed fans into Staples Center for the first time this season.

While the Lakers have lost five of their past nine games, the team received good news. Anthony Davis, who has missed 28 games with a right calf strain, received an evaluation from club doctors and was cleared for full-contact practices, which means the versatile big man is close to returning to action.

A balanced scoring effort, with seven Bucks finishing in double figures, powered Milwaukee to a lead it held almost the entire night. Giannis Antetokounmpo returned from a six-game absence caused by a knee injury to score 15 points, almost 14 fewer than his season average.

Trae Young, returning from a calf injury that sidelined him for two games, scored 15 points with nine assists, but he committed six of the Hawks’ 11 turnovers and shot just 3-for-17. Bogdan Bogdanovic led all scorers with 28 points, and Clint Capela added 16 points and a game-high 16 rebounds.

Read More: NBA trades: 20 stars who could be moved this summer

Deandre Ayton scored 26 points on 10-of-11 shooting and collected 11 rebounds to lead red-hot Phoenix to a victory over visiting Sacramento.

Despite struggling a bit early from 3-point range (4-for-13 for the game), Curry recorded his ninth consecutive game with 30-plus points. He also finished with five assists, four rebounds and two blocks.

Collin Sexton returned after missing the previous two games with a left groin strain and led the Cavaliers with 30 points, but Cleveland lost for the third time in four games.