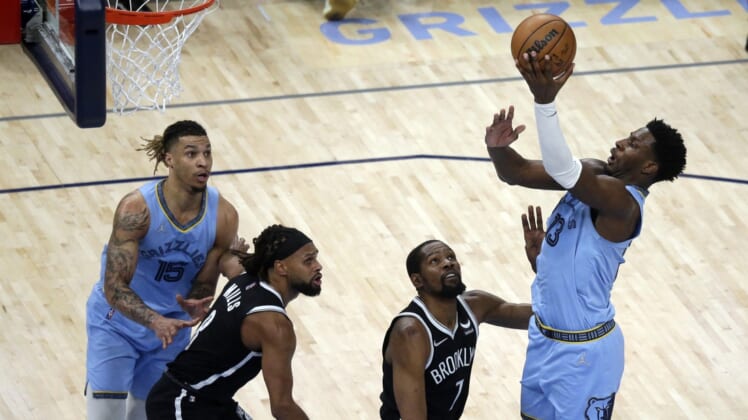 Desmond Bane and De’Anthony Melton scored 23 points apiece for the host Memphis Grizzlies, who blew an 18-point lead before executing down the stretch in a 132-120 victory over the Brooklyn Nets on Wednesday.

The Nets fell despite getting 43 points from Kyrie Irving and 35 from Kevin Durant, and despite Memphis playing without Ja Morant, who sat out a second straight game due to a sore right knee.

The Grizzlies reached 50 wins for the fifth time in franchise history and improved to 15-2 in games Morant has missed this season.

Jayson Tatum and Jaylen Brown each scored 26 points to lead Boston to a win over visiting Utah.

The Celtics led by as many as 32 points on the way to their fifth consecutive win, and they snapped a four-game losing streak against the Jazz. Robert Williams III added 12 points and 10 rebounds to lead four other Celtics in double figures. Marcus Smart fired off nine of his career-high 13 assists in the first quarter.

Donovan Mitchell had 37 points to lead the Jazz, who have lost back-to-back games after a three-game winning streak.

James was a late scratch due to left knee soreness, but Dwight Howard helped pick up the slack in his absence. Howard scored 24 points — his most in a game since November 2018 — and matched Russell Westbrook for the top mark on the team.

Tyrese Maxey and Tobias Harris added 21 and 20 points, respectively, for the 76ers, who won for the fourth time in five games. Maxey also dished seven assists and grabbed five rebounds

Keldon Johnson made five 3-pointers while scoring 26 points as the Spurs won for the third time in the past four games. Jakob Poeltl blocked a career-best six shots while also contributing 16 points and nine rebounds for San Antonio.

Devin Vassell also scored 16 points and Josh Richardson added 15 as the Spurs, whose largest lead was 43 points. Ben McLemore had 23 points and Drew Eubanks scored 20 for the Trail Blazers.

Devin Booker saved 11 of his 28 points for the final 4:36 as the Suns rallied from as much as a 15-point deficit to earn their sixth straight win and their 18th victory in their past 22 games.

Anthony Edwards paced the Timberwolves with 19 points on a night when Towns was held to 15 points and 11 rebounds. Jarred Vanderbilt contributed 12 points and a team-high 12 rebounds for Minnesota.

Jerami Grant had 21 points, eight rebounds and four assists and host Detroit scored 23 unanswered points in the third quarter while rolling to a win over Atlanta.

Theo Maledon scored 17 of his season-high 25 points in the fourth quarter as Oklahoma City beat visiting Orlando to snap a 10-game overall losing streak and an 11-game home losing streak.

Tre Mann and Isaiah Roby added 21 points each for the Thunder. Oklahoma City’s Vit Krejci tied a career high with 12 points and set a personal best with 11 rebounds for his first career double-double.

Damian Jones tipped in a Trey Lyles miss with two-tenths of a second remaining, allowing Sacramento to overtake Indiana for a win in Indianapolis.

Jones’ heroics came after former Sacramento standout Buddy Hield, traded to Indiana last month, fumbled the ball out of bounds with 14 seconds left and the Pacers holding a one-point lead. Lyles could do no better than to get off a 25-footer, but the ball ended up in friendly hands and Jones converted the winning shot.

Obi Toppin added 18 points and a game-high 11 rebounds, Alec Burks had 17 points and Evan Fournier and Taj Gibson each scored 12 for the Knicks, who played without Julius Randle (quadriceps).

LaMelo Ball paced the Hornets with 32 points. Terry Rozier chipped in with 18 points, and Miles Bridges had 15 points and nine assists.

Jalen Brunson scored 16 of his game-high 28 points in the third quarter and Dallas, playing without Luka Doncic (ankle), completed a season sweep of visiting Houston.

Spencer Dinwiddie, starting in the place of Doncic, added 26 points — 19 in the first half. Dorian Finney-Smith added 14 points, five rebounds and three steals for the Mavericks, while Dwight Powell chipped in 13 points and seven boards.

Rookie Alperen Sengun recorded 14 points and 11 rebounds off the Houston bench while Christian Wood followed a career-best 39-point performance Monday against Washington with 12 points and 10 boards.