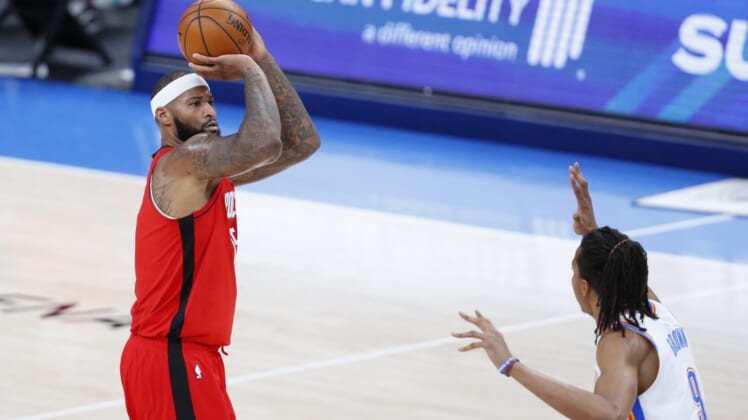 Eric Gordon scored 25 points and led the Rockets’ record 3-point barrage as Houston rolled to a 136-106 win over the host Oklahoma City Thunder on Monday.

Gordon hit five of the Rockets’ franchise-best 28 treys. Houston earned its sixth win in a row and moved above .500 for the first time this season. DeMarcus Cousins also hit five 3-pointers and scored 17 points.

The Rockets’ previous record for 3-pointers in a game was 27 last season, which set an NBA record at the time. The Milwaukee Bucks broke that record earlier this season with 29.

Shai Gilgeous-Alexander led the Thunder with 19 points while Darius Bazley and Hamidou Diallo added 15 each.

Devin Booker nailed a 3-pointer with 1.5 seconds remaining to cap a wild finish that gave visiting Phoenix a victory over Dallas.

Booker, who missed the Suns’ previous four games with a hamstring injury, went for 24 points in 31 minutes. Chris Paul had 34 points, nine rebounds and nine assists for Phoenix while Deandre Ayton put up 10 points and 17 rebounds. Luka Doncic totaled 25 points and eight assists while Kristaps Porzingis registered 19 points and 10 rebounds for the Mavericks.

LeBron James scored 21 points, including the final nine points of the game for the Lakers, and made a crucial defensive play to help visiting Los Angeles hold off Atlanta.

Anthony Davis led the Lakers with 25 points and Dennis Schroder scored 16 against his former team. The Lakers were 5-2 on the road trip and have won two straight.

The Hawks got 25 points and a season-high 16 assists from Trae Young, 22 points from John Collins and 16 points and 13 rebounds from Capela.

Nine Memphis players scored in double figures as the Grizzlies romped past host San Antonio for their seventh consecutive win.

San Antonio’s Keldon Johnson paced all scorers with 25 points and grabbed 10 rebounds. DeMar DeRozan and LaMarcus Aldridge added 14 and 12 points, respectively, and Patty Mills scored 11 for the Spurs, who have lost two straight.

Monk, who entered the game averaging 6.3 points, made 11 of 18 shots, including 9 of 13 from 3-point range. He also sank a 3-pointer with 17 seconds left in the fourth quarter to force overtime. Hornets rookie point guard LaMelo Ball, making his first NBA start, had 14 points, seven assists and five rebounds.

Nassir Little established career bests of 30 points and five 3-pointers for the Trail Blazers, who have lost four straight meetings with the Bucks and three of their past four games overall.

Collin Sexton scored 26 points and Jarrett Allen collected 23 points and 18 rebounds to lift host Cleveland to a victory over Minnesota.

Allen also had five blocks while playing in place of Andre Drummond, who sat out the contest due to lower back soreness. Drummond recorded 25 points and 22 rebounds in Cleveland’s 109-104 loss at Minnesota on Sunday. Darius Garland had 19 points and 11 assists for the Cavaliers, who are 7-4 at home.

D’Angelo Russell scored 18 points and rookie Anthony Edwards added 13 for the Timberwolves, who have lost 15 of their last 18 games overall and eight of nine overall on the road.