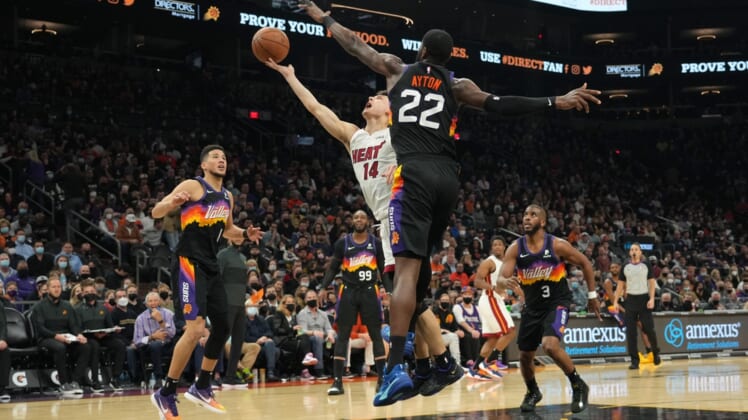 Tyler Herro scored a game-high and season-high 33 points, and Duncan Robinson added 27 points as the Miami Heat knocked off the host Phoenix Suns 123-100 on Saturday night.

Herro’s 33 were two short of Miami’s franchise record for high-scoring game by a reserve. Herro made 12-of-20 shots, including 3-of-4 on 3-pointers in 34 minutes. Robinson made 8-of-16 from behind the arc, also off the bench, and his 27 points were also a season high.

The Heat, who shot a scorching 50 percent from 3-point territory, also got 14 points and a game-high 13 assists from Kyle Lowry. Teammate Omer Yurtseven added a game-high 16 rebounds to go with eight assists and seven points.

The Suns fell to 17-5 on their home court. They were led by Devin Booker, who scored 26 points but made just 5-of-15 shots from the floor. Phoenix also got 20 points from Mikal Bridges, and star point guard Chris Paul was held to nine points and seven assists, making just 3-of-9 shots.

Memphis began the first leg of a weekend back-to-back in Los Angeles with leading scorer Ja Morant sidelined due to a thigh injury. Without Morant’s production (25.0 points, 6.6 assists per game), the Grizzlies struggled early and fell behind by as many as 12 points in the first quarter.

A 10-0 run early in the second quarter sparked a 38-20 period for Memphis, and the visiting Grizzlies never trailed in the second half en route to their eighth straight win.

Domantas Sabonis scored a career-high 42 points on 18-of-22 shooting, and Lance Stephenson contributed 16 points and 14 assists off the bench to lead Indiana past Utah in Indianapolis.

The Pacers snapped a six-game losing streak, while Utah, which was without Rudy Gobert and Joe Ingles, both in the NBA’s health and safety protocol, lost for the second straight night.

Donovan Mitchell led the Jazz with 36 points on 13-for-27 shooting and chipped in nine assists after missing Friday’s game with a back injury. Bojan Bogdanovic and Jordan Clarkson, both of whom sat out Friday, finished with 21 and 18, respectively.

Jayson Tatum scored 19 points and Josh Richardson added 17 off the bench for the Celtics. Robert Williams III had 12 points, and Marcus Smart contributed 10 points and four steals for the Celtics, who snapped their two-game skid.

RJ Barrett finished with 19 points and Immanuel Quickley added 18 to pace the Knicks. Julius Randle finished with 13 points on 6-of-19 shooting with 12 boards and six assists.

Giannis Antetokounmpo racked up 43 points for the Bucks, with 18 of those coming on free throws. Khris Middleton scored 27 points and Bobby Portis had 19 for Milwaukee.

Trey Lyles contributed 16 points and 13 rebounds for Detroit, which had lost 20 of 23 prior to the matchup of teams with the NBA’s worst records. Saddiq Bey also had 16 points and Cade Cunningham added 12 points and five assists. Josh Jackson chipped in 11 points.