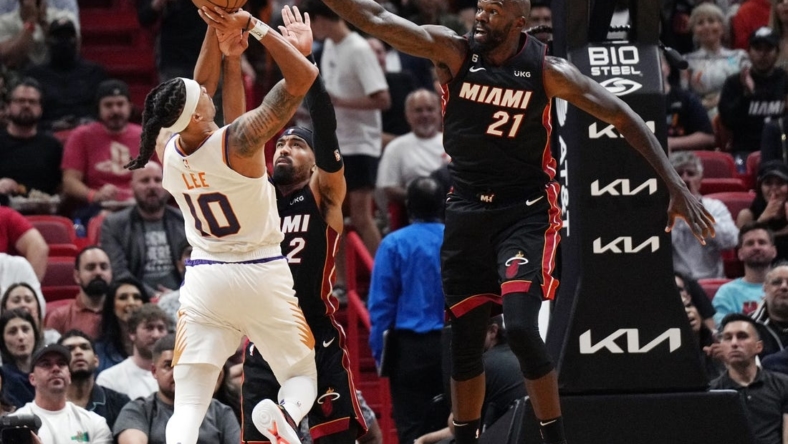 Bam Adebayo scored 14 of his season-high 30 points in the fourth quarter, helping the host Miami Heat rally to a 113-112 win over the Phoenix Suns on Monday night.

Devin Booker, who led the Suns with 25 points, missed two potentially game-winning shots in the final 6.2 seconds. On the first one, Booker’s mid-range jumper was blocked by Jimmy Butler. Booker retrieved the ball and missed a desperation turnaround 3-pointer at the buzzer to end the game.

The Suns’ Deandre Ayton had a double-double with 16 points and 12 rebounds. Duane Washington Jr., working on a two-way contract, scored 21 points to lead the Phoenix bench. That reserve unit also featured Damion Lee, who scored 14 points.

Mason Plumlee racked up 18 points and 10 rebounds and LaMelo Ball, in just his second game of the season, had 17 points and nine assists, as Charlotte snapped an eight-game losing streak by beating host Orlando.

Franz Wagner had 23 points and Wendell Carter Jr. had 20 points to pace Orlando. Orlando closed within 96-87 just under the eight-minute mark of the fourth on Bol Bol’s jumper. But the Hornets fed Plumlee for a couple of shots to help thwart the comeback bid. Ball’s floater stretched the lead to 104-89 with slightly more than three minutes to play.

Jayson Tatum had 27 points, 10 rebounds, three steals and three blocks as host Boston came from behind to earn a win over Oklahoma City.

Jaylen Brown added 26 points, and Marcus Smart heated up in the fourth quarter to finish with 22 points, eight assists and five rebounds, helping the Celtics to their seventh straight win.

All five Thunder starters scored in double figures, led by Shai Gilgeous-Alexander’s 37 points. Luguentz Dort had 21 with three 3-pointers, and Aleksej Pokusevski logged a double-double with 16 points and 14 rebounds.

Jalen Green paced the Rockets with 25 points and seven assists and added six rebounds. Kevin Porter Jr. chipped in 20 points and seven rebounds but missed 12 of 18 shots. The Rockets were undone by their lackadaisical ball security and poor shooting in the first half. The Clippers turned 11 Houston turnovers into 16 points before the break while the Rockets missed 10 of 13 3-pointers.

When reserves Norman Powell (17 points) and Terance Mann (14 points) scored in succession with just under eight minutes left in the game, the Clippers extended to a 108-87 lead.

Jordan Poole poured in a season-high 36 points, 19 of them in a dominating first half, as Golden State waltzed to a win over visiting San Antonio in San Francisco.

It was the second time the Hawks have beaten Milwaukee this season and marked the first home loss for the Bucks. Two of Milwaukee’s three losses this season have come against Atlanta.

Hunter made a pair of 3-pointers and was 10-for-10 at the line, and Trae Young added 21 points and nine assists. Clint Capela added 19 points and 10 rebounds.

Milwaukee was led by Giannis Antetokounmpo, who had 27 points — 11 of them at the line — and eight rebounds.

Chris Boucher had 20 points and O.G. Anunoby supplied 19 points and seven rebounds for the Raptors, who had lost six straight to the Pistons. Malachi Flynn added 12 points.