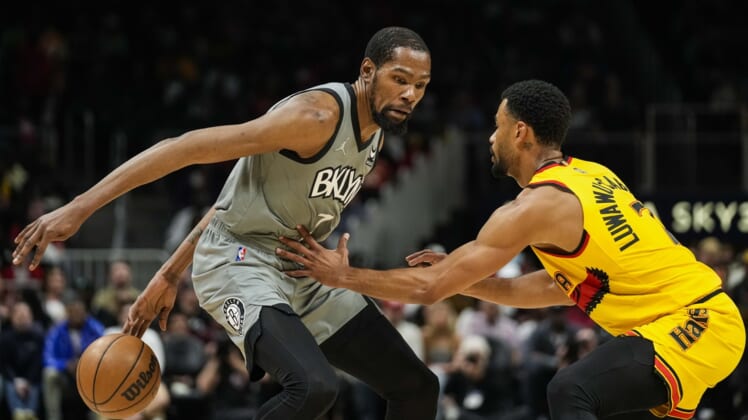 Trae Young scored 36 points — nine in the final minute — to help the Atlanta Hawks offset a career-high 55-point night from Kevin Durant and hang on to beat the visiting Brooklyn Nets 122-115 on Saturday.

After Brooklyn cut Atlanta’s lead to 111-108 on a Durant dunk with 1:25 remaining, Young scored on a floater and 3-pointer to push the lead back to eight points with 23.5 seconds left. The Hawks were 6-for-6 at the line in the final minute, four by Young, to put the game away.

Atlanta won its fifth straight game and moved into No. 8 in the Eastern Conference, dropping Brooklyn into the 10th spot. Young was 10-for-24 from the floor, four of them 3s, and 12-for-14 from the line, along with 10 assists and six rebounds for his 39th double-double. De’Andre Hunter and Danilo Gallinari each scored 15.

Durant was 19-for-28 from the floor and 8-for-10 on 3-pointers with seven rebounds and bested his career high of 54 points against Golden State when he was a member of the Oklahoma City Thunder in 2014. Kyrie Irving scored 31 points, including seven 3s, and six assists. The Nets have lost three of four.

Klay Thompson bombed in 12 of his game-high 36 points in an 18-0 fourth-quarter flurry as Golden State rallied to knock off Utah in San Francisco.

The improbable win, after they trailed by 21 points midway through the second quarter, allowed the Warriors to clinch a postseason berth. Thompson finished 8-for-17 on 3-pointers and the Warriors 20-for-48. Jordan Poole finished with 31 points, Andrew Wiggins chipped in with 17 points, and Draymond 10 points, nine rebounds and seven assists.

Guards Donovan Mitchell and Mike Conley had 26 points apiece for Utah, while Rudy Gobert posted 14 points and a game-high 20 rebounds. Conley had a game-high eight assists.

James Harden had 12 points, 13 assists and eight rebounds, and Matisse Thybulle scored 12 points. Georges Niang and Shake Milton chipped in with 10 points apiece for Philadelphia, which tied a franchise record with 21 made 3-pointers.

The Cavaliers rebounded nicely from an ugly 131-107 loss to the Atlanta Hawks on Thursday. Garland posted his 27th point-assist double-double and seventh in nine games. The All-Star guard made 8 of 19 shots and hit five 3-pointers.

Caris LeVert added 19 as the Cavaliers began pulling away in the latter portion of the third before clinching the win in the fourth. The Cavaliers shot 54.3 percent, including 44.1 percent (15 of 34) from 3-point range.

Zach LaVine led the Bulls with a game-high 33 points on 11-for-21 shooting, including 5-for-12 on 3-pointers. The Bulls, who had their two-game win streak broken, also got 26 points from DeMar DeRozan, who had 50 in his previous contest.

Miami, which leads the Eastern Conference and swept all four games from Chicago this season, also got 19 points off the bench from Tyler Herro. Butler had a well-rounded game with seven rebounds and six assists as the Heat improved to 23-15 on the road.