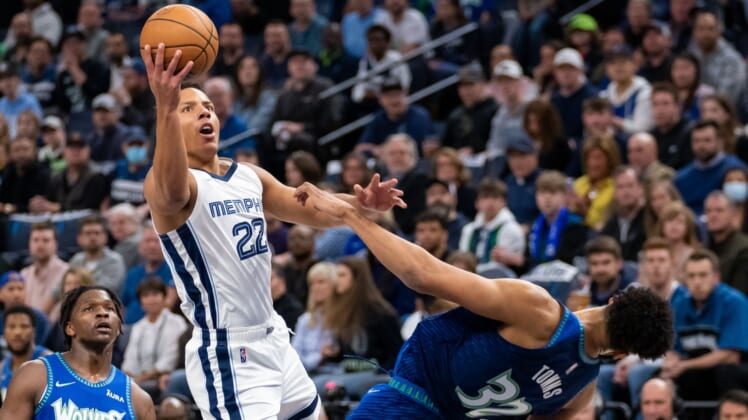 Desmond Bane scored 26 points to lift the visiting Memphis Grizzlies to a 104-95 victory over the Minnesota Timberwolves on Thursday in Game 3 of a Western Conference first-round playoff series in Minneapolis.

Bane sank seven 3-pointers as the second-seeded Grizzlies overcame a 26-point deficit to seize a 2-1 lead in the series. Game 4 is Saturday in Minneapolis.

Brandon Clarke collected 20 points and eight rebounds off the bench for the Grizzlies, who outscored seventh-seeded Minnesota 37-12 in the fourth quarter. Ja Morant overcame a 5-for-18 shooting performance to finish with 16 points, 10 assists and 10 rebounds.

Timberwolves guard D’Angelo Russell scored 22 points, a stark contrast to his performance in the first two games of the series. He sank just 5 of 22 shots in Games 1 and 2 while scoring 21 points.

Gary Payton II had 11 points and Draymond Green finished with 10 assists for Golden State, which can close out the series Sunday in Denver.

Nikola Jokic had 37 points and 18 rebounds for the Nuggets, who have lost seven straight playoff games dating back to last season. Aaron Gordon added 18 points and 12 rebounds.

Brunson led seven Dallas players in double digits to compensate for the absence of superstar Luka Doncic, who has yet to play in the series due to a strained left calf.