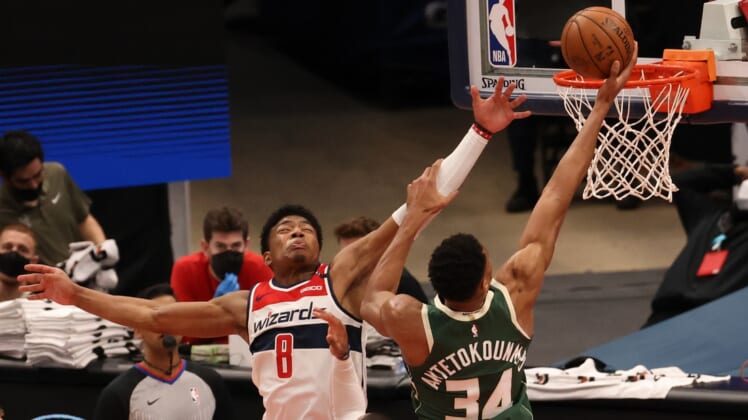 Giannis Antetokounmpo recorded his third triple-double in as many games, and the Milwaukee Bucks held off a second-half surge to beat the host Washington Wizards 133-122 on Monday.

Antetokounmpo finished with 31 points, 15 rebounds and 10 assists in what is actually his fourth consecutive triple-double — counting his Most Valuable Player-winning performance in the March 7 All-Star Game.

Milwaukee’s Brook Lopez shot 8 of 12 from the floor for 22 points and Khris Middleton added 23 points. The trio paced the Bucks through a dominant first 2 1/2 quarters, pushing the lead to as many as 26 points in the third quarter.

Behind Bradley Beal, who scored 26 of his game-high 37 points in the second half, Washington closed to within seven with a little more than four minutes remaining. Russell Westbrook finished with 23 points and a game-high 17 assists, and Rui Hachimura added 22 points, seven rebounds and five assists.

LeBron James recorded the 98th triple-double of his career and Montrezl Harrell scored 15 of his team-high 27 points in the second quarter, during which Los Angeles pulled away from Golden State en route to a victory in San Francisco.

James’ triple-double, his fourth of the season, consisted of 22 points and game highs of 10 rebounds and 11 assists. Talen Horton-Tucker added 18 points for the Lakers while Kyle Kuzma had 17.

Stephen Curry scored 27 points to lead the Warriors, who lost for the fifth time in their past six games. Andrew Wiggins chipped in with 15 points.

Kyrie Irving scored 34 points and James Harden posted his 10th triple-double of the season with 21 points, 15 rebounds and 15 assists as host Brooklyn held off New York.

Harden entered the fourth quarter one rebound shy of the triple-double and got it 41 seconds into the period. The Nets eventually secured their 13th win in 14 games.

Julius Randle led the Knicks with 33 points and 12 rebounds, and RJ Barrett chipped in 23 points, six rebounds and four assists.

Ivica Zubac (15 points, 11 rebounds) made his second start of the season for the Clippers while Marcus Morris Sr. (14 points) started for the third time.

Nikola Jokic had 32 points and 14 rebounds, Will Barton and Michael Porter Jr. scored 20 points each as host Denver rallied to beat Indiana.

JaMychal Green and Jamal Murray added 16 apiece for the Nuggets, who outscored the Pacers 34-15 in the fourth quarter.

Terry Rozier had a big late-game stretch, including a go-ahead 3-point basket, to finish with 26 points as Charlotte rallied to defeat visiting Sacramento.

De’Aaron Fox racked up 29 points, Hield had 23 points, Richaun Holmes poured in 17 points to go with 15 rebounds for the Kings, who have lost the first two outings of a six-game road trip. Sacramento sustained another key loss as Marvin Bagley III exited with a broken left hand.

Dejounte Murray had 19 points, 10 rebounds and six assists as San Antonio bounced back from a lopsided loss the previous night by rolling past host Detroit.

San Antonio, which was blown out 134-99 by Philadelphia on Sunday, grabbed the lead in the second quarter and held it the rest of the way. Jakob Poeltl supplied 14 points, 12 rebounds, four blocks and two assists while Patty Mills tossed in 14 points off the bench.

Devin Booker recorded 27 points and five assists to help Phoenix roll to a victory over visiting Memphis. Chris Paul scored 18 points on 9-of-11 shooting and added seven assists and four steals as the Suns.

Deandre Ayton registered 15 points, nine rebounds and three blocked shots for Phoenix, which won for the 18th time in the past 22 games. Jae Crowder tallied 14 points and Cameron Payne had 13.

Jonas Valanciunas had 24 points and 17 rebounds for the Grizzlies, who have lost three straight games and four of their past five.