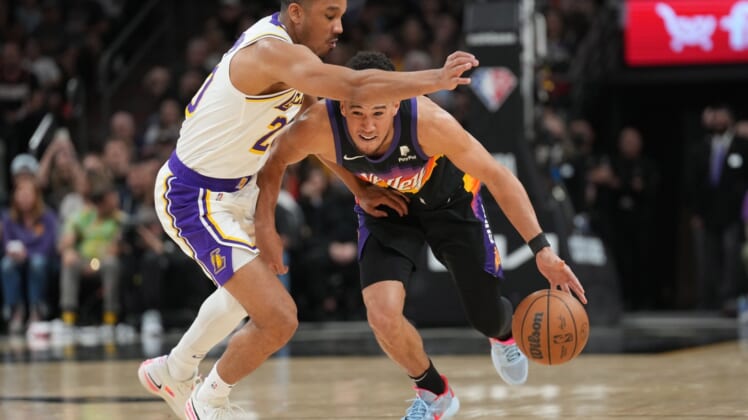 Devin Booker poured in 12 of his team-high 30 points during a 48-point, first-quarter explosion Sunday night that sent the host Phoenix Suns to a 140-111 victory over the Los Angeles Lakers in a matchup of possible first-round playoff opponents.

Deandre Ayton also contributed 10 points to the first-quarter flurry that put the Lakers in a 26-point hole and paved the way to a seventh loss in their last nine games despite a game-high 31 points from LeBron James.

Ayton finished with 23 points for the Suns, who successfully rebounded from a 117-112 home loss to the Toronto Raptors on Friday. In beating the Lakers for the third straight time this season by a total of 57 points, the Suns went from a 6-2 deficit to a 16-6 lead behind a pair of Booker 3-pointers.

James went for 31 points and team-highs in rebounds with seven and assists with six. The 30-point game was his 28th of the season. Carmelo Anthony had 18 points, Russell Westbrook and Malik Monk 13 apiece, and Austin Reaves 10 for the Lakers, who lost despite outscoring the Suns 48-36 on 3-pointers.

Jonas Valanciunas had 32 points and 10 rebounds as host New Orleans ended a four-game losing streak with a victory over Houston.

Durant made 19 of 37 shots and his biggest hoop snapped a 103-103 tie. After Goran Dragic’s defense forced New York’s Julius Randle into a turnover, Durant spotted up from the left wing opposite New York’s bench and cleanly hit a 3-pointer over RJ Barrett.

Durant finished one shy of his career high and also added nine assists. He also broke the franchise record held by John Williamson (1978) for points in a game against the Knicks.

James Harden finished with 26 points, making 13-of-15 free throws, on 5-for-19 shooting. He also had six rebounds, six assists and three steals as Philadelphia improved to 6-1 with Harden wearing a Sixers uniform.

Wendell Carter Jr. totaled 23 points and 12 rebounds, but Orlando missed an opportunity for its first three-game winning streak this season. Markelle Fultz dished out a season-high 11 assists and had eight of Orlando’s 51 bench points.

Ex-Piston Luke Kennard supplied 16 points off the bench for the Clippers, who have defeated Detroit in their last six meetings. Another ex-Piston, Reggie Jackson, contributed 15 points, nine assists and eight rebounds. Ivica Zubac had 14 points and grabbed 15 rebounds. Isaiah Hartenstein chipped in 12 points.

Spencer Dinwiddie hit a game-winning 3-pointer with 11.6 seconds remaining to lift visiting Dallas over Boston. Luka Doncic had a game-high 26 points for the Mavericks, who have won seven of their last eight games and broke Boston’s five-game winning streak.

Doncic, who was subbed out briefly due to left hamstring tightness, had 17 in the second half after scoring or assisting on 14 of the Mavericks’ 18 first-quarter points. He hit a game-tying pull-up 3-pointer with 1:21 to play. Dorian Finney-Smith had 19, Dinwiddie added 18 and Jalen Brunson rounded out the double-digit scorers for Dallas with 14 points.

Young was 13 of 20 from the field, including seven 3-pointers, and was 14-for-14 on free throws, including four in the final 28.8 seconds to help nail down the win. It was the second-most points scored by Young and the seventh time he’s scored 40-plus.

Atlanta had six other players in double figures, including De’Andre Hunter and Danilo Galinari with 15 each. Indiana had three players top the 20-point mark: Hield and Tyrese Haliburton scored 25 each and Duane Washington Jr. matched his career high of 22.

The Grizzlies won their third consecutive game, while the Thunder have dropped five straight games and nine straight at home. Ja Morant finished with 17 points and 10 assists in the win.