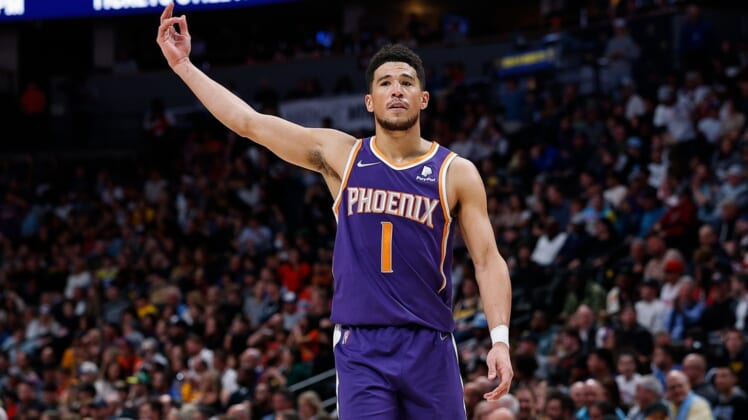 Devin Booker scored a season-high 49 points and added 10 assists, Chris Paul had 17 points and 13 assists in his return to the lineup, and the visiting Phoenix Suns beat the Denver Nuggets 140-130 on Thursday night to clinch the top seed in the Western Conference.

Mikal Bridges scored 22 points, Deandre Ayton had 16 points and Jae Crowder finished with 12 for the Suns (60-14), who have won seven straight.

Paul missed 15 games with a fractured thumb and hadn’t played for the Suns since prior to the All-Star break. He did log two minutes in the All-Star Game.

Desmond Bane scored 23 of his 30 points in the first half to fuel host Memphis to a win over Indiana.

Jaren Jackson Jr. scored 20 points to lift the Grizzlies to their third straight win and seventh in their last eight games. De’Anthony Melton made five 3-pointers and finished with 19 points, while John Konchar added 18 points in the rout.

Lance Stephenson scored 25 points in 23 minutes off the bench for the Pacers, who lost for the seventh time in 10 games. Stephenson made 10 of 15 shots, including all five from 3-point range.

Alvarado had 11 of his 15 points and added two assists during a 21-7 run to start the fourth quarter, helping the Pelicans win for the third time in four games. CJ McCollum scored 25 points and Jonas Valanciunas had 16 points and 19 rebounds.

Zach LaVine scored 39 points, Coby White added 23 before fouling out, Nikola Vucevic had 16 and Alex Caruso 11 to lead the Bulls, who lost for the fifth time in six games and the eighth time in nine road games.

Siakam was 6 of 7 on 3-pointers. OG Anunoby added 14 points in his return to the Raptors’ lineup after missing 15 games with a broken finger.

Lauri Markkanen scored 20 points for the Cavaliers, who have lost two in a row. Darius Garland added 18 points and 10 assists, Lamar Stevens had 16 points and Kevin Love had 12 points and 10 rebounds.

With Giannis Antetokounmpo and Khris Middleton sidelined, Holiday finished with 24 points and 10 assists to lead the Bucks to their second victory in the three-game season series against their Eastern Conference foe.

Grayson Allen contributed 21 points on 7-for-10 shooting, including five 3-pointers. Pat Connaughton notched 16 points off the bench and Bobby Portis had 11 points and 12 rebounds to record his first double-double since March 9.