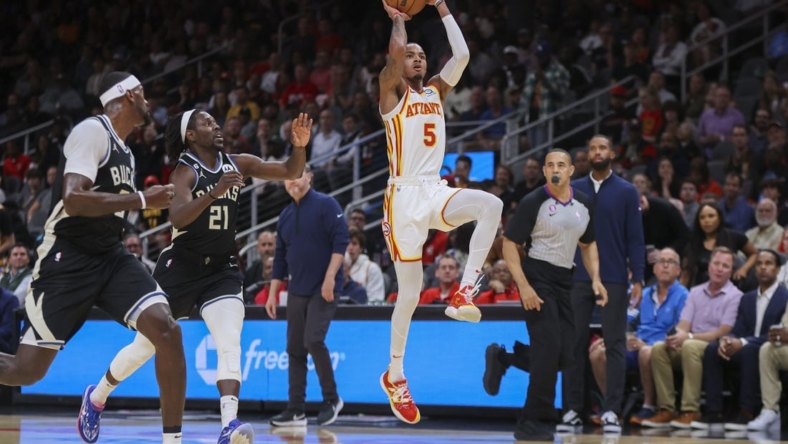 Dejounte Murray took over the reins for injured Trae Young and finished with 25 points and 11 assists Monday night as the host Atlanta Hawks handed the Milwaukee Bucks their first loss of the season, 117-98.

Rookie AJ Griffin, who had 23 points combined in his first five NBA games, came off the bench to score 24, helping the Hawks win their third straight and avenge an earlier loss at Milwaukee.

Giannis Antetokounmpo matched Murray with 25 points for the Bucks, the last of the unbeatens whose 9-0 start had equaled the 14th-longest season-opening winning streak in NBA history.

Josh Hart swished a left-corner 3-pointer at the buzzer as visiting Portland defeated Miami, who led by as many as 15 in the second half.

Warriors 116, Kings 113
Stephen Curry took Golden State’s five-game losing streak into his own hands, exploding for a season-high 47 points in a come-from-behind victory over Sacramento in San Francisco.

Curry saved 14 of his points for a game-ending 24-13 run, including a 3-pointer that gave Golden State the lead for good at 110-107 with 1:24 to go. Andrew Wiggins, who had a pair of 3-pointers in Golden State’s late run, backed Curry with 25 points, while Klay Thompson finished with 16 and Draymond Green 11.

Making 10 of 12 free throws, De’Aaron Fox paced Sacramento with 28 points, while Domantas Sabonis had 19 points and a game-high 14 rebounds. They shared team-high assist honors with six apiece. Malik Monk had 24 points off the bench for the Kings.

Zach LaVine scored a season-high 30 points and Nikola Vucevic contributed 15 points and 13 rebounds to boost host Chicago over Toronto. Chicago earned a split of the home-and-home, back-to-back set after losing 113-104 in Toronto on Sunday.

Nikola Jokic scored 26 points and dished out 10 assists, and he hit a key jumper in the final minute as visiting Denver held on to defeat struggling San Antonio in the second of two games between the teams in three days.

The Nuggets hammered San Antonio 126-101 on Saturday in Denver. But the rematch featured 11 ties and 25 lead changes. Michael Porter Jr. added 24 points for the Nuggets, with Murray scoring 19, Bones Hyland 14 and Caldwell-Pope 11.

Kyle Kuzma scored 20 points and made key baskets down the stretch as Washington put aside recent struggles to capture a 108-100 road victory against Charlotte.

Kristaps Porzingis poured in 19 points to help the Wizards on the interior in a game when they shot just 5 of 19 (26.3 percent) on 3-point attempts. Reserves Jordan Goodwin and Rui Hachimura added 17 and 16 points, respectively.

The Hornets received 25 points from P.J. Washington, 20 points from Kelly Oubre Jr. and 19 from Terry Rozier, but shot just 5 for 32 from 3-point range. The loss was their fifth in a row.

Jalen Green scored a game-high 34 points to lead five players in double figures as Houston snapped a six-game skid with a wild road win over Orlando.

Kenyon Martin Jr. scored 21 points off the Houston bench while hitting 4 of 8 3-pointers. Alperen Sengun posted 20 points and 10 rebounds, while Eric Gordon added 19 points and five treys as the Rockets made a season-high 24 3-pointers while shooting a robust 50 percent from behind the arc.

Myles Turner had 37 points to lead six Indiana scorers in double figures and added 12 rebounds in the defeat of New Orleans in Indianapolis.

Joel Embiid returned from a three-game absence with the flu to score 33 points and host Philadelphia defeated Phoenix.

Embiid hit all 16 of his free throws and added 10 rebounds. Georges Niang tied his career high with seven 3-pointers and scored 21 points while Tobias Harris also added 21 for the Sixers, who snapped a two-game skid. Tyrese Maxey chipped in with 11 on 4-of-18 shooting.

The Sixers played without James Harden, who’s sidelined with a strained tendon in his foot. Devin Booker led the Suns with 28 points.

Jayson Tatum scored 19 of his game-high 39 points in the second quarter and visiting Boston earned a victory over Memphis.

Boston trailed by six after 12 minutes, but used a 20-0 run to outscore Memphis 37-20 in the second. The Celtics led by as many as 14 points in the quarter. Memphis was within one point following a Desmond Bane basket with 3.5 seconds left in regulation, but Tatum increased the lead to three points by making two free throws, and the Grizzlies failed to get off a potential game-tying shot.

Jaylen Brown tossed in 21 points and had nine rebounds for Boston. Celtics guard Marcus Smart finished the game with 15 points and a season-high 12 assists. Ja Morant led Memphis with 30 points, including five 3-pointers, and nine assists. He scored 14 points in the third, when Memphis outscored Boston 31-19.

Julius Randle scored a season-high 31 points, and New York rode the cushion from a 76-point first half to down Minnesota in Minneapolis.

Randle’s best offensive performance of the season stemmed from a first half in which he hit six 3-pointers to pace a torrid Knicks offense. Jalen Brunson and RJ Barrett finished with 23 and 22 points, respectively.

Karl-Anthony Towns led Minnesota with 25 points on 9-of-12 shooting from the floor, but the backcourt duo of D’Angelo Russell and Anthony Edwards combined to shoot just 9 of 26 from the field.

Collin Sexton contributed 17 points while Mike Conley added 14 points and 12 assists as the Jazz won their third straight game. Utah, which had seven players score in double digits, defeated the Los Angeles Clippers on the road Sunday night 110-102 before returning home. It was also Utah’s second win over the Lakers in four days.

Anthony Davis netted a game-high 29 points and Russell Westbrook added 22 for the Lakers, who lost their third consecutive outing. Los Angeles played without three usual starters, including LeBron James, who sat out due to left foot soreness.

Luka Doncic scored 36 points and teammate Dwight Powell got the decisive steal in the final seconds for Dallas, which appeared to take control midway through the fourth but had to hold on to beat visiting Brooklyn.

Doncic reached 30 points for the ninth straight game to open the season, including scoring 41 in Brooklyn on Oct. 27. With Dallas trailing 78-74, his 3-pointer with 7:54 left started a 14-0 burst and enabled the Mavericks to start pulling away.

Paul George scored 26 points, including a key three-point play in the final minute, as Los Angeles rallied from a 13-point deficit in the final five minutes for a victory over visiting Cleveland.

Marcus Morris Sr. added 20 points and Reggie Jackson had 18 for the Clippers, who shot 18 of 22 from the free-throw line in the final quarter to power the comeback. Los Angeles won for the fourth time in its past five games while ending the Cavaliers’ eight-game winning streak.

With the score tied 112-112, George sank a driving layup with 37.2 seconds remaining and made the ensuing free throw after he was fouled by Isaac Okoro. The sequence capped a 15-0 run that gave Los Angeles the lead for the first time since the opening moments of the fourth quarter.