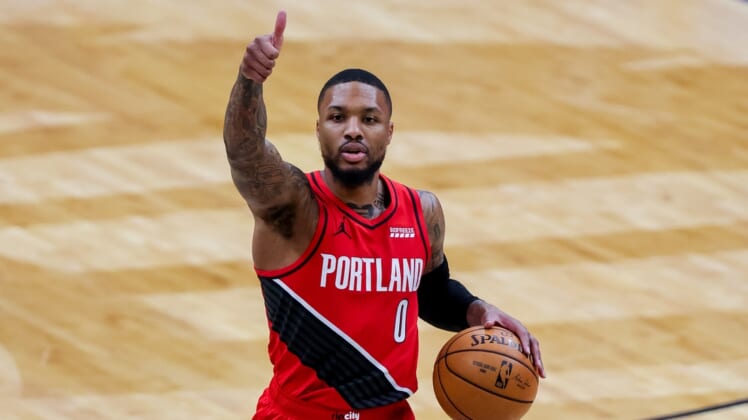 Lillard, who also tied a career high with 16 assists, drove to the basket and for a layup and subsequent foul shot that gave Portland a 126-124 lead with 16 seconds left.

The Blazers finished a 3-0 road trip thanks in part to Gary Trent Jr. adding 23 points. Zion Williamson tied a career high with 36 points for the Pelicans. Ball contributed 21.

Stephen Curry brushed aside his worst shooting night in three weeks with a pair of 3-pointers in overtime, including a go-ahead hoop with 1:15 to go that propelled Golden State to a come-from-behind victory over Miami in San Francisco.

Curry finished with 25 points on 8-for-25 shooting and added a game-high-tying 11 assists. He got a lot of help from Kent Bazemore with a season-best 26 points and Andrew Wiggins and Kelly Oubre Jr. with 23 apiece.

Jimmy Butler (13 points, 12 rebounds, 11 assists) had a triple-double for Miami, which got 24 points from Bam Adebayo.

Trae Young scored 40 points, 16 in the fourth quarter, and helped Atlanta snap a four-game losing streak with a win at Boston.

Young was 14-for-20 from the field, including four 3-pointers, and had eight assists. It was his ninth game with 30-plus points and third with at least 40 points. He reached the 4,000-point career mark with his 25th point, supplanting Bob Pettit as the fastest in franchise history to reach the milestone.

Embiid could be seen wincing in pain at times with back pain and was stretching on the baseline during some timeouts. Tobias Harris contributed 24 points, 15 rebounds and five assists for the Sixers, who snapped their three-game losing streak.

John Wall led the struggling Rockets with 26 of his 28 points in the second half while DeMarcus Cousins and Jae’Sean Tate each had 19.

Allen’s shooting helped the Grizzlies overcome an off-shooting night for Ja Morant, who was just 4 of 14 from the floor. But Morant affected the game in plenty of ways, picking up his first triple-double of the season and the third of his career with 15 points, 12 assists and 11 rebounds.

Shai Gilgeous-Alexander returned for the Thunder after missing the previous four games and six of the last eight with a left knee sprain. He led the team with 22 points and added six assists.

Rudy Gobert contributed 23 points on 8-of-12 shooting and grabbed 20 rebounds for the Jazz, who have won 20 of their past 21 games. Utah’s lone setback during that stretch came on Jan. 31 at Denver.

Lou Williams had 16 points, six rebounds and six assists and Reggie Jackson added 15 points for the Clippers, who had their four-game winning streak snapped.

Domantas Sabonis recorded 36 points, 17 rebounds and 10 assists, and Indiana rallied for an overtime win against Minnesota in Minneapolis.

Malcolm Brogdon added 32 points, nine rebounds and seven assists for the Pacers, who won for the third time in four games.

Malik Beasley came off Minnesota’s bench to score a team-high 31 points. Karl-Anthony Towns finished with 30 points and 10 rebounds while Ricky Rubio added 20 points and 13 assists, but the Timberwolves still lost for the sixth time in seven games.

Zach LaVine poured in 37 points and host Chicago rallied from a 25-point deficit to defeat Detroit.

Bradley Beal had 25 points and 10 assists and hit two free throws with 0.1 seconds left, lifting host Washington to a win over Denver.

Davis Bertans scored a career-high 35 points and went 9-for-11 from beyond the arc while Russell Westbrook finished with 12 points, 13 rebounds and 12 assists for Washington, which won its third straight.

Jamal Murray scored 19 of his 35 points in the fourth quarter, Nikola Jokic had 33 points and nine assists and Michael Porter Jr. and Facundo Campazzo had 14 points apiece for Denver.

Terrence Ross came off the bench to score a season-high 30 points, including 13 during a decisive run spanning the third and fourth quarters, as host Orlando overcame an early double-digit deficit to beat New York.

The 30 points by Ross were his most since he scored 35 points for the Magic against the Miami Heat on March 4, 2020. Nikola Vucevic (16 points, 16 rebounds) posted his 20th double-double of the season for the Magic.

Julius Randle scored 25 points with seven rebounds for the Knicks, who had their three-game winning streak snapped and failed in their chance to reach .500 this late in a season for the first time since they were 18-18 in December 2017.