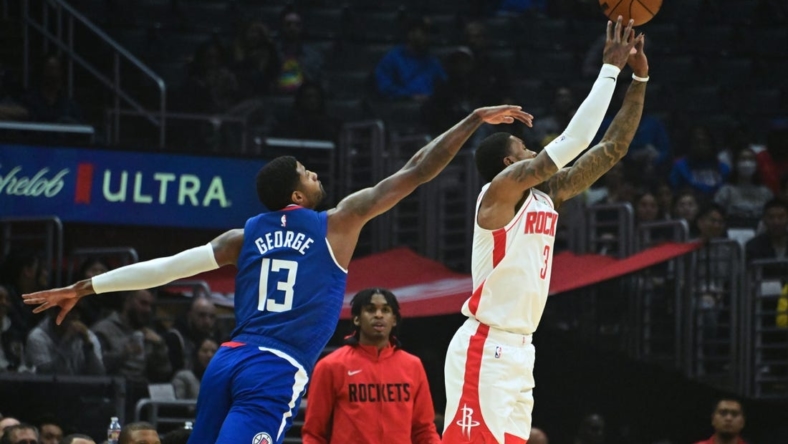 Paul George made a contested 15-foot baseline jumper with 6.2 seconds left to give the Los Angeles Clippers a 95-93 victory over the visiting Houston Rockets on Monday night.

George had 35 points, nine rebounds, eight assists and six steals for the Clippers, who scored the game’s final seven points to break a four-game losing streak. Los Angeles never led in the fourth quarter until George sank his tiebreaking basket in the final seconds.

Kenyon Martin Jr. scored 23 points off the bench and Alperen Sengun had 14 points and nine rebounds for Houston, which completed a winless four-game road trip and dropped to 0-6 on the road this season.

Kevin Durant scored 36 points as Brooklyn snapped a four-game losing streak by fending off several comeback attempts and holding on for a victory over Indiana in New York.

On the 15th anniversary of his pro debut with the Seattle SuperSonics, Durant made 13 of 22 shots and passed former Net Vince Carter to move into 19th on the all-time NBA scoring list in the first half. The star forward also contributed nine rebounds and seven assists.

Chris Duarte scored a career-high 30 points for the Pacers, including the tying basket in the fourth quarter. Buddy Hield added 22 and rookie Bennedict Mathurin contributed 16. Indiana shot 47.1 percent but also missed its first 12 3-point attempts and sank just 11 of 39 long-distance shots overall after hitting a team-record 23 treys on Saturday.

Lauri Markkanen compiled a season-high 31 points, 11 rebounds and four blocked shots to lead Utah to a win over Memphis in Salt Lake City.

This was Utah’s second win over Memphis at home in three days. Malik Beasley added 18 points, while former Grizzlies guard Mike Conley and Collin Sexton each scored 15 as Utah won for the sixth time in eight games this season.

The Grizzlies welcomed back Ja Morant after he missed Saturday’s game with an illness, but they played short-handed again as Desmond Bane was sidelined with an ankle injury. Morant finished with a game-high 37 points on 12-of-18 shooting.

Giannis Antetokounmpo had 31 points, Jrue Holiday hit a tiebreaking 3-pointer in the final minute and host Milwaukee remained the NBA’s only unbeaten team by downing Detroit.

Holiday finished with 25 points, 10 assists and seven rebounds as the Bucks defeated their Central Division rival for the 14th time in the last 15 regular-season meetings. They’ll play again in Milwaukee on Wednesday. Cade Cunningham’s 27 points, seven assists and six rebounds led the Pistons, who were playing the tail end of a back-to-back.

Antetokounmpo made a fadeaway jumper with 2:07 to go for a 105-101 advantage. Jaden Ivey answered with a pair of free throws. After the Bucks failed to score on their next possession, Isaiah Stewart tied it with a layup. Holiday responded with a 3-pointer from the wing before Cunningham missed an elbow jumper. Antetokounmpo committed a turnover, but Cunningham missed a long 3-point try and Brook Lopez made two free throws to clinch Milwaukee’s victory.

Tyrese Maxey contributed a game-high 28 points as Philadelphia used a third-quarter surge to beat Washington despite the absence of star center Joel Embiid.

Philadelphia used a 13-point advantage in the third period to give a cushion and allow for James Harden, who recorded a double-double, to ice the contest with two free throws. Harden recorded 23 points and 17 assists. Philadelphia shot 56.1 percent.

Kristaps Porzingis added 32 points for Washington, who kept in contention for a majority of play. Washington had four double-digit scorers, including Bradley Beal with 20 points.

Davion Mitchell came off the bench in place of an injured De’Aaron Fox and scored 23 points, including five straight over a critical stretch in the final 1:26, to lead Sacramento past host Charlotte.

Charlotte’s Kelly Oubre Jr. added 16 points and Dennis Smith Jr. finished with 15. The Hornets enjoyed a 54-34 advantage scoring in the paint and knocked down 14 of 29 3-point attempts, but surrendered a 2:1 second-chance point disparity of 22-11 to the Kings.

Scottie Barnes added 21 points, seven rebounds and eight assists and Gary Trent Jr. scored 21 points for the Raptors, who were playing without Fred VanVleet (back). Trae Young scored 14 points and had 10 assists and committed a career-high 10 turnovers for the Hawks, while Dejounte Murray had 20 points and nine assists.

The Raptors took a 15-point advantage into the fourth quarter and bumped the lead to 18 in the first 10 seconds on Siakam’s hook shot and free throw. The lead reached 24 on Christian Koloko’s dunk with 7:04 to play in the fourth quarter before Toronto coasted to victory.