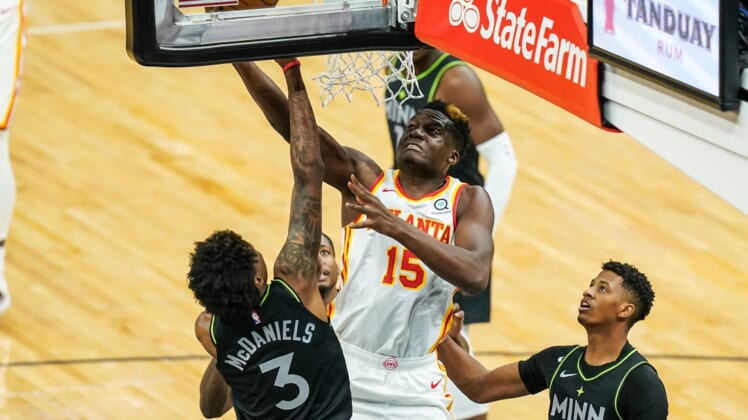 Clint Capela recorded his first career triple-double and Trae Young scored a season-high 43 points to pace the Atlanta Hawks to a 116-98 win over the Minnesota Timberwolves in Minneapolis on Friday and extend their winning streak to three games.

Capela had 13 points, 19 rebounds and a career-high 10 blocked shots, becoming the first NBA player to have a triple-double with blocks since 2018. Capela joined Dikembe Mutombo (2000) and Tree Rollins (1979, two in 1982 and 1983) as Atlanta Hawks to record a triple-double including blocked shots. Capela also became the third Hawks player ever to post 10 or more blocks in a single game.

Jamal Murray had 18 points and nine assists for Denver, and Will Barton scored eight of his 17 points in overtime. Michael Porter Jr. scored seven off the bench in his first game since Dec. 29, having been sidelined due to COVID-19 protocols.

Devin Booker scored 31 points, Deandre Ayton had 27 points and 13 rebounds, Mikal Bridges contributed 24 points and 10 rebounds and Chris Paul totaled 11 points and 15 assists for the Suns, who lost for the third time in four games.

Leonard also had eight rebounds and three steals while George collected seven rebounds and five assists. Serge Ibaka finished with 17 points, making seven of his eight field-goal attempts, and grabbed 11 rebounds, and Nicolas Batum scored 14 points on 5-of-6 shooting for the Clippers.

Former Clipper Shai Gilgeous-Alexander had 30 points and eight assists for Oklahoma City, which lost for the fourth time in five games. Luguentz Dort scored 15 of his 19 points in the second half.

Gordon Hayward posted 34 points and Devonte’ Graham scored a season-high 24 points for the Hornets, who hadn’t played since Saturday. Charlotte lost its fourth game in a row.

Malcolm Brogdon made a go-ahead 3-pointer with 3.6 seconds remaining in overtime to give Indiana a victory over Orlando in Indianapolis.

Brogdon finished with 23 points, Jeremy Lamb had 22 off the bench and Myles Turner tied a season high with 22 in his return from a two-game absence.

Nikola Vucevic collected 24 points and 12 rebounds, and Aaron Gordon finished with 17 for the Magic, who have lost seven of their past eight games.

Norman Powell scored 14 of his game-high 23 points in the first quarter and Toronto went on to defeat visiting Miami. The teams split two games at Toronto’s temporary home in Tampa, with the Heat winning 111-102 on Wednesday.

Pascal Siakam, who was listed as questionable for the game because of a groin injury, scored 15 points and grabbed 14 rebounds for Toronto. OG Anunoby added 21 points for the Raptors, who completed a five-game homestand with a 4-1 record.

Kendrick Nunn scored 22 points off the bench for Miami. Bam Adebayo had 14 points and eight rebounds.

Joel Embiid scored 38 points and grabbed 11 rebounds as host Philadelphia beat rival Boston for the second game in a row.

Tobias Harris scored 23 points on 10-of-12 shooting and Seth Curry added 15 after missing the previous seven games due to health and safety protocols. Ben Simmons had 15 points and 11 assists as the Sixers improved to 9-1 at home.

Jaylen Brown led the Celtics with a career-high-tying 42 points to go along with nine rebounds, while Marcus Smart added 20 points and seven assists. Kemba Walker chipped in with 19 points.

Kyrie Irving scored 38 points in his second game back from a two-week absence, but it was not enough for the Nets, who rested Kevin Durant. James Harden added 19 points and 11 assists.

After the Mavericks’ 10-point lead was chopped to one with 1:03 to play, Doncic got Dallas back on track with a clutch jumper with 49.4 seconds left. Jalen Brunson hit a 3-pointer with 18.9 seconds left to help the Mavericks hold on down the stretch.

Kristaps Porzingis and Tim Hardaway Jr. added 21 points apiece for Dallas while Brunson scored 16. DeMar DeRozan led the Spurs with 29 points and LaMarcus Aldridge hit for 26. San Antonio played without Dejounte Murray for all but the first 1:02 of the game after he sprained his left ankle.

De’Aaron Fox led the Kings with 22 points, including a dunk and two free throws that helped Sacramento pull away late. Harrison Barnes scored 21 and Haliburton added 16 as the Kings snapped a four-game losing streak.

Julius Randle paced the Knicks, who were playing the second night of a back-to-back, with game highs of 26 points and 15 rebounds. New York had won three in a row, including a 119-104 decision over the Golden State Warriors on Thursday night.