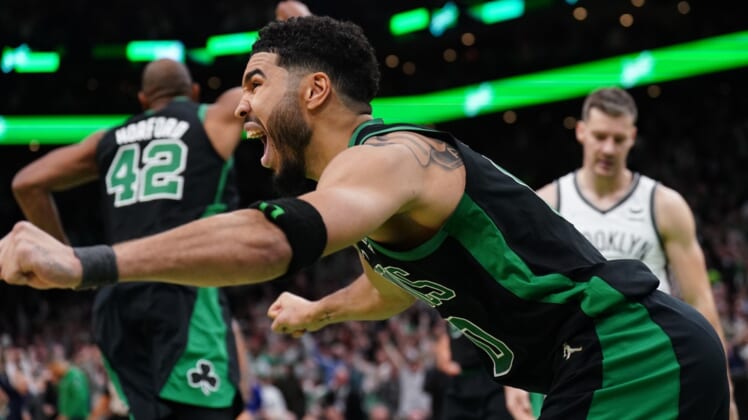 With the Nets up 114-113 and looking for a clinching basket, Kevin Durant misfired on a 3-pointer with 15 seconds remaining. Al Horford secured the rebound, and after Jaylen Brown found Smart wide open on the left side, the veteran guard passed up the shot and threw across the key to Tatum, whose catch-and-shoot game-winner had to survive a video review.

Tatum finished with a team-high 31 points, Brown had 23, and Smart and Horford scored 20 apiece for Boston. Horford also had 15 rebounds.

Kyrie Irving had a game-high 39 points for the seventh-seeded Nets, including a 3-pointer with 45.9 seconds remaining that gave the visitors a 114-111 lead. Kevin Durant finished with 23 points for the Nets.

The Heat held Hawks scoring leader Trae Young to eight points, though he didn’t play in the fourth quarter. He shot 1-for-12 from the field, missed all seven of his 3-point attempts and committed six turnovers. Danilo Gallinari’s 17 points paced No. 8 seed Atlanta.

Giannis Antetokounmpo poured in 27 points on 10-of-19 shooting and helped Milwaukee hold off visiting Chicago to open its first-round Eastern Conference playoff series.

The sixth-seeded Bulls trailed by just one with 1:36 left to play after an Alex Caruso layup, but No. 3 seed Milwaukee closed the game on a 6-0 run to secure the victory.

Antetokounmpo added 16 rebounds and Brook Lopez went for 18 points. Jrue Holiday supplied 15 points, Khris Middleton scored 11 and Bobby Portis finished with 10 points and 12 rebounds off the bench. Nikola Vucevic paced Chicago with 24 points and 17 rebounds despite just 9-of-27 shooting on the night.

Chris Paul scored 19 of his 30 points in the fourth quarter to help Phoenix deflate a New Orleans comeback attempt and post a victory in the opening game of its Western Conference playoff series.

Paul made 12 of 16 field-goal attempts — including 4 of 6 from 3-point range — and also contributed 10 assists, seven rebounds and three steals for top-seeded Phoenix, which led by as many as 23 points in the wire-to-wire victory.