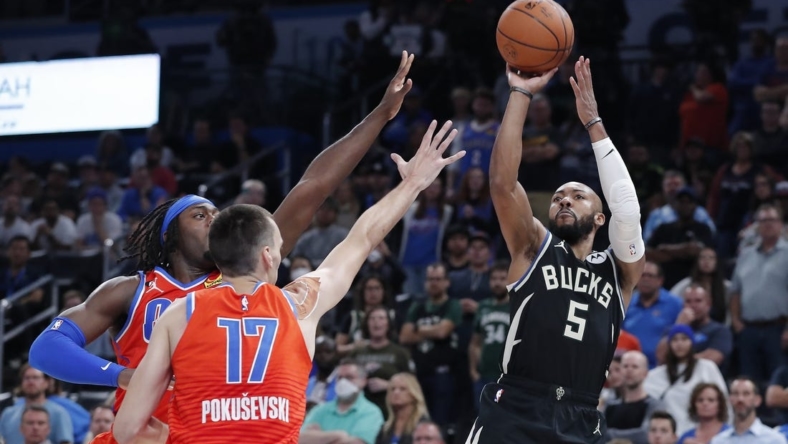 Jevon Carter scored a career-high 36 points to lead the Milwaukee Bucks to a 136-132 double-overtime victory over the host Oklahoma City Thunder on Wednesday.

Carter shot 15 of 27 from the field, including 5 of 10 from 3-point range. Milwaukee’s Brook Lopez added 24 points and 13 rebounds. Grayson Allen scored four of his 18 points in the second overtime, all free throws on back-to-back possessions in the closing seconds to help the Bucks stretch their lead to six and put the game away.

Shai Gilgeous-Alexander led the Thunder with 39 points on 13-of-25 shooting. Tre Mann added 21 points off the bench.

The Bucks led 112-100 with five minutes left in regulation before Gilgeous-Alexander scored 10 of Oklahoma City’s next 13 points to fuel a 19-7 run that sent the game into overtime.

Ja Morant and Desmond Bane each scored 32 points as visiting Memphis outlasted San Antonio in overtime for its fourth win in five games.

The Grizzlies began the extra period on an 11-2 run, but the Spurs staged a furious rally to claw back within 123-122 with 14.3 seconds left. Morant’s free throw with five seconds remaining put the Grizzlies up by two, and San Antonio’s Devin Vassell missed a contested 3-point attempt at the buzzer.

Jakob Poeltl and Vassell scored 22 points each for the Spurs, who dropped their fifth straight contest.

Jayson Tatum scored 16 of his game-high 31 points in the third quarter as host Boston pulled away from Detroit for its season-high fourth straight win.

After scoring just five first-half points, Tatum shot 6-for-8 from the field, including 4-for-5 from downtown, in the third. Jaylen Brown scored 30 points, reserve Sam Hauser had 24 on six 3-pointers and Al Horford added 13 for Boston. Marcus Smart dished out 11 assists.

Jaden Ivey led Detroit’s six double-figure scorers with 19 points. Ivey, Isaiah Stewart and Jalen Duren finished with double-doubles — each grabbing 10 rebounds. Star guard Cade Cunningham was held without a field goal (0-for-8) in the opening half and went on to finish with only four points.

Brandon Ingram scored 16 of his 22 points in the fourth quarter and Jonas Valanciunas recorded 21 points and 13 rebounds to lift New Orleans past host Chicago, despite another big night from the Bulls’ DeMar DeRozan.

Zion Williamson chipped in 19 points for the Pelicans, including 15 in the second half, while Herbert Jones scored 17.

The Bulls had the ball trailing 112-109 but committed a turnover — one of 15 on the night — on the inbounds play with 17.4 seconds to go. DeRozan scored a game-high 33 points, his fifth game with at least 30 points this season. Zach LaVine added 23 points for Chicago.

Markkanen made 9 of 18 from the field, including a season-high six 3-pointers, and grabbed eight rebounds to help Utah become the first team in the Western Conference to win 10 games. Jordan Clarkson added 23 points and Malik Beasley came off the bench to score 18, all on a season-best six 3-pointers.

Dejounte Murray led Atlanta with 26 points. Trae Young returned after missing Monday’s game with right shin soreness and made only 10 of 28 shots for 22 points and nine assists. De’Andre Hunter matched his season high with 22 points, while Clint Capela had 15 points and 19 rebounds.

Jalen Green paced the Rockets with 21, though six others scored in double digits. Alperen Sengun had 17 points and eight rebounds.

Hoping to end a two-game losing streak, the Magic trailed 81-78 following a JaVale McGee tip-in with 8:34 to go. But while Dallas was able to add just two points in the next six minutes, the Magic went on a 12-2 run to open a seven-point advantage. The Mavericks never got closer than five after that.

Spencer Dinwiddie paced the Mavericks with a game-high and season-best 29 points on a rare off-night of shooting by Luka Doncic, who misfired on 20 of his 29 attempts while totaling 24 points.

Devin Booker scored 32 points and dished 10 assists, Mikal Bridges scored a season-high 31 points and Phoenix went on a 14-0 run in the first quarter to grab a lead it never relinquished en route to a win over Minnesota in Minneapolis.

The Suns’ offense clicked thanks to unselfish play, with Phoenix producing 31 of its 47 made field goals off assists. Cameron Payne dished for eight, complementing his season-high 23 points — one off his career high — as he started in place of Chris Paul (heel).

Rudy Gobert led Minnesota in his return from COVID-19 health and safety protocols, scoring 25 points on 8-of-11 shooting from the floor with a game-high 11 rebounds. Jaden McDaniels added 24 points, and D’Angelo Russell finished with 20.

Nikola Jokic shook off foul trouble to score 24 points, Aaron Gordon had 18 points and 16 rebounds and Denver rallied from 18 down to beat Indiana in Indianapolis.

Bennedict Mathruin scored 30 points, Tyrese Haliburton had 21 points and 11 assists for the Pacers, who had won four of their previous five games.

Lillard shot 8-for-16 from the field, making six of the team’s 11 baskets from 3-point range. He also supplied a game-high seven assists and pulled down six rebounds. Anfernee Simons scored 19 points with six assists for the Trail Blazers, who’ve won five of their six road games.

All five Hornets starters reached double figures in points, led by Terry Rozier with 18 in the team’s sixth consecutive loss.

Kevin Durant totaled 29 points along with season highs of 12 assists and 12 rebounds as host Brooklyn never trailed and cruised to a rout of New York.

The Nets led by as many as 35 as Brooklyn improved to 3-2 under Jacque Vaughn, who had the interim tag removed from his title on Wednesday afternoon and helped the Nets beat the Knicks for the eighth straight time. Seth Curry added a season-best 23 points for Brooklyn.