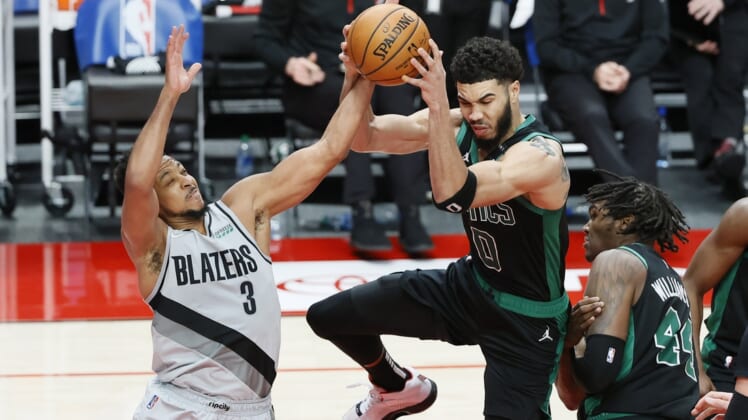 Jayson Tatum recorded 32 points, nine rebounds and five assists to lead the Boston Celtics to a 116-115 victory over the host Portland Trail Blazers on Tuesday night.

Damian Lillard posted 28 points and 10 assists, and Carmelo Anthony scored 25 points on 10-of-15 shooting for the Trail Blazers. Norman Powell added 20 points and CJ McCollum had 16 points as Portland lost for the fifth time in the past seven games.

Tatum nailed a clutch 3-pointer with 7.8 seconds remaining to give Boston a four-point lead. Powell buried a 31-foot, 3-pointer with five seconds left to move Portland within one. But Lillard’s 80-foot heave was well wide of the mark at the horn.

Kevin Durant scored 31 points on 11-for-15 shooting to lead short-handed Brooklyn to a comfortable victory over host Minnesota in Minneapolis, snapping a five-game losing streak at Minnesota.

The game was played without fans after being rescheduled from Monday in the wake of the police shooting of Daunte Wright, which sparked protests around Minneapolis. Wolves center Karl-Anthony Towns did not play, instead spending time with his family mourning the one-year anniversary of his mother’s death as a result of COVID-19.

Joe Harris scored 23 points and went 5-for-8 from 3-point range while Landry Shamet totaled 19 points, five rebounds and five assists off the bench. Rookie Anthony Edwards led Minnesota with 27 points and eight rebounds while D’Angelo Russell finished with 15 points off the bench.

Leading scorer Kawhi Leonard missed the game due to a right foot injury. George recorded 32-plus points for the fourth consecutive game, while the Clippers reeled off their sixth straight win. Marcus Morris Sr. finished with 22 points on 9 of 12 shooting from the floor, including a perfect 3 of 3 from 3-point range.

Alex Caruso made key contributions in the last minute, finishing with 13 points and six assists off the Lakers bench. Dennis Schroder posted 19 points in the victory.

Devonte’ Graham poured in 19 points for the Hornets. Caleb Martin racked up 17 points in a rare starting role and Jalen McDaniels, also a recent addition to the starting lineup, had 16 points.

Clint Capela added 19 points and 21 rebounds for the Hawks as they completed a three-game season sweep over the Raptors. Brandon Goodwin scored 18 and Kevin Huerter added 17 for the Hawks, who have won seven of their past eight games.

Pascal Siakam scored 30 points with seven assists and six rebounds for the Raptors. Rookie Malachi Flynn added a season-best 22 points while OG Anunoby had 15 and Khem Birch had 13 points.

Deandre Ayton finished with 19 points and 13 rebounds to propel host Phoenix to a victory over Miami.

Ayton, who shot 8-for-10 from the field, was one of six Suns who scored in double figures. Four of those were reserves as Phoenix’s bench outscored Miami’s second unit 65-24. Jimmy Butler led Miami with 18 points and eight assists, but the Heat struggled from long distance against Phoenix’s defense. Miami shot 9-for-44 from 3-point range (20.5 percent).

The loss, OKC’s seventh in a row, spoiled a career-high 42 points from the Thunder’s Lu Dort.