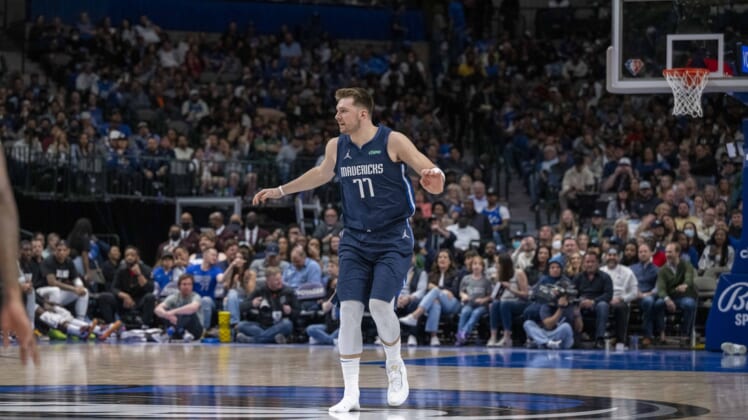 Dallas Mavericks star guard Luka Doncic avoided a one-game suspension when the NBA rescinded a technical foul called on him during Friday’s 128-78 demolition of the visiting Portland Trail Blazers.

The technical would have been Doncic’s 16th of the season, which calls for an automatic suspension. But the NBA’s reversal on Saturday will allow Doncic to play in Sunday’s regular-season finale at home against the San Antonio Spurs.

The foul call on Friday was made after the end of the first quarter by official Tony Brothers, who cited “continuously complaining” as the reason in a pool report.

Brothers, the crew chief, was asked why Doncic received the technical foul.

“At the end of the quarter he took a shot and he felt he got fouled,” Brothers said. “He started to complain to each of the officials. When I was walking toward the table, he was 15 feet in the backcourt still complaining so he got a technical for continuously complaining.”

Asked if Doncic used profanity, Brothers said “there was not.”

Doncic said after Friday’s game that the technical should be rescinded.

Having Doncic available against San Antonio is an important development for the Mavericks (51-30), who are battling the Golden State Warriors for the third seed in the Western Conference. The Warriors are 51-29 entering Saturday’s road game against the Spurs.