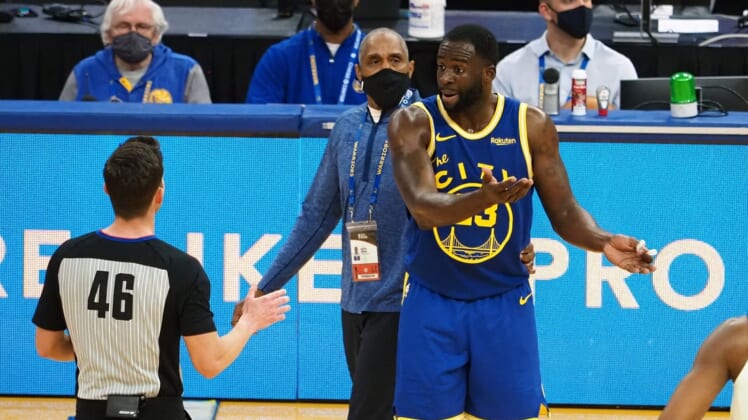 Admitting a refereeing error, the NBA rescinded a technical foul that led to Golden State veteran Draymond Green getting ejected from the Warriors’ game Thursday night against the New York Knicks, The Athletic and ESPN reported Friday.

With just over one minute remaining in the second quarter at San Francisco, Green committed a turnover on a pass intended for rookie teammate James Wiseman. As the Warriors were headed back on defense, Green appeared to yell at Wiseman, but ref John Butler thought the shouting was directed at him, so he charged Green with a technical foul.

Since Green previously received a T for arguing with the officials in the first quarter, he was kicked out of the game. The Warriors went on to lose 119-104.

Green, teammate Stephen Curry and Golden State coach Steve Kerr attempted to convince the refs they had made a mistake at the time of Green’s second technical, but the call was not reversed.

Kerr said after the game, “At halftime (refereeing crew chief) Ben Taylor came out and told me that it was a mistake, that John Butler didn’t realize that Draymond was yelling at his teammate. He thought he was yelling at him.”

Taylor spoke to a pool reporter postgame, saying that Butler gave Green his second technical due to “profanity that was deemed to be directed at the official.”

Green told The Undefeated’s Marc J. Spears, “I’m just a bit confused. Officials can meet and make a decision on any call throughout the game, but when it comes to a technical that was clearly the wrong call, due to an official assuming I was talking to him when in fact I wasn’t, that can’t be overturned? Maybe it’s time to take a look at that rule. I would love clarity on why that’s the rule, if in fact it is a rule.”

Wiseman said, “Just one of those moments (Green) was like, ‘Catch the ball’ or something like that. I don’t understand why the ref did that. I was confused myself.”