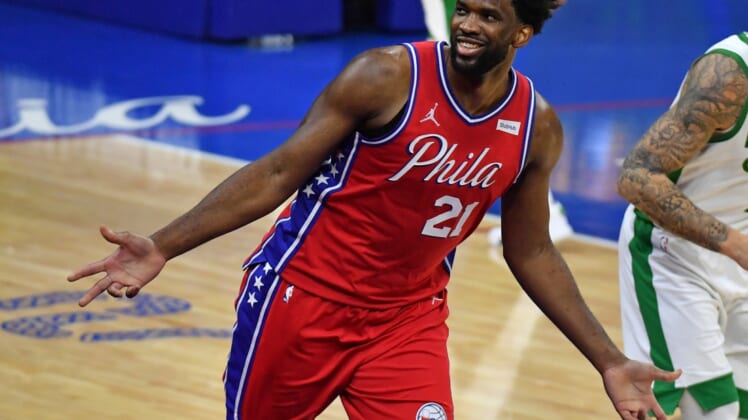 Thanks to Joel Embiid, the Philadelphia 76ers collected back-to-back victories against one of their main Eastern Conference rivals. They now get a chance to fatten their record with a two-game set against the NBA’s worst team.

Following home victories over the Boston Celtics on Wednesday and Friday, Philadelphia travels to Detroit to play the Pistons on Saturday and Monday.

Embiid powered for 42 points and 10 rebounds in the first game against the Celtics, then put up 38 points and 11 rebounds in 30 minutes during Friday’s victory. He shot 11 of 15 from the field Friday and made all but one of his 15 free-throw attempts in the 76ers’ 122-110 win.

Philadelphia guard Ben Simmons came on strong in the fourth quarter, delivering 11 of his 15 points, and he finished with 11 assists. He has been taking fewer shots this season while averaging a career-low 12.4 points.

“Ben does a lot,” he said. “He can’t focus on one thing, like focusing him on just scoring. He’s too good for that. To me, it would be a waste if that’s all we focused on for him.”

Sixers guard Seth Curry returned to action for the first time since Jan. 6, as he was sidelined following a positive COVID-19 test. He scored 15 points in 27 minutes.

Focusing on something positive isn’t easy for the Pistons, who continue to find painful ways to lose.

They fell apart in the fourth quarter at Atlanta on Wednesday, squandering a 17-point lead and succumbing in overtime. On Friday, they trailed by 20 points in the first half to Houston, erased the deficit, then dropped a 103-102 decision.

Jerami Grant had a chance to win the game, but his layup came after time expired. A foul was called against the Rockets’ P.J. Tucker on the play, but after a video review, the officials determined that also occurred after the buzzer.

“I don’t know if it’s sluggish or being emotionally drunk from the other night, losing in Atlanta, but excuses are not even important,” Detroit coach Dwane Casey said. “If we’re going to build a winning program, we’ve got to come out every night with our guns blazing, ready to roll, no matter what happens. It’s going to be the same (Saturday) night.”

Grant had a poor shooting night, going 4-for-15 from the field, but he still scored a team-best 21 points. He has reached the 20-point mark in 14 consecutive games.

The Pistons also had a rough night at the foul line against Houston, missing 12 of 37 free throws. Those are the kind of missed opportunities that drive coaches crazy.

“We’re finding ways to get back into it, to get ourselves in a position to win,” Casey said. “We’re due. We’re due to have some good luck.”