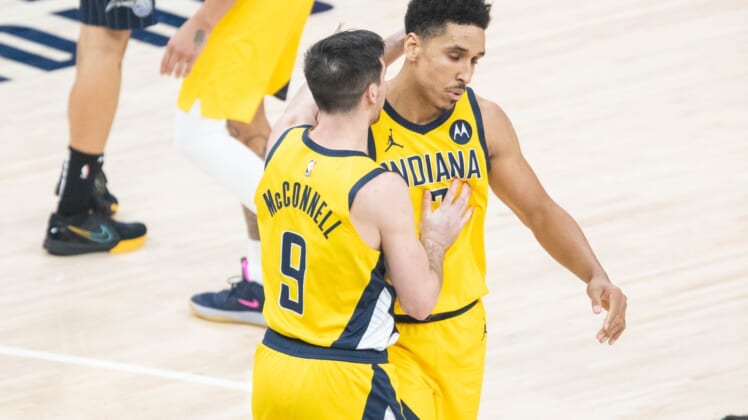 The Toronto Raptors and Indiana Pacers will be carrying the momentum of important wins when they meet Sunday afternoon in the opener of a two-game set at Indianapolis.

After two straight losses, the Pacers beat the Orlando Magic 120-118 Friday on Malcolm Brogdon’s 3-pointer with 2.8 seconds remaining in overtime. The Pacers tied the game on a 4-foot shot by Domantas Sabonis with 10.7 seconds left in the fourth quarter but fell behind by five points in overtime.

The Raptors, meanwhile, rebounded from a lethargic loss to the Miami Heat on Wednesday in Tampa, Fla., with a convincing 101-81 victory in the rematch on Friday.

With Kyle Lowry out with an infected toe, Norman Powell started in his place and scored 14 of his game-high 23 points in the first quarter.

“Night and day in terms of our effort defensively,” Raptors coach Nick Nurse said. “When you move hard on defense, you move hard on offense. It helps the pace of play. We were flying around.”

Pascal Siakam, who was listed as questionable for the game with a groin injury and did not practice Thursday, scored 15 points and grabbed 14 rebounds.

Lowry could be ready to play against Indiana.

After the 111-102 loss to the undermanned Heat on Wednesday, Nurse referred to the effort as “unacceptable” and said it was the team’s worst defensive effort of the season “times three.”

“Even though it was a close game (Wednesday) for the most part, a lot of the reason why it was so close were mistakes that we normally don’t make,” Powell said.

The Raptors led by as many as 21 points in the first quarter Friday, allowed the Heat to tie it at 61 during the third quarter, and then pulled away again.

“I think it was a big win for us,” said Raptors guard Fred VanVleet, who had 13 points. “Obviously, losing doesn’t sit well with anybody around here. And so the last day and a half people were pretty uptight, but it was good to get back on the winning side and to play the way that we do.”

Pacers center Myles Turner returned to the lineup Friday after a two-game absence with a fracture in his right hand. The Pacers had allowed 129 and 124 points respectively in two games without Turner, who had 22 points, nine rebounds and three blocks on Friday.

Turner played about a half of the overtime because of cramping.

Jeremy Lamb scored 22 points in his second game back after surgery to repair a torn ACL, torn lateral meniscus and a lateral femoral condylar fracture in his left knee, an injury that incurred in a game at Toronto last Feb. 23.

He provides a scoring option that is needed after Victor Oladipo was traded and with the player acquired to replace him, Caris LeVert (left kidney), unavailable.

But the final offensive option of the game was Brogdon.

“I Iike to take big shots,” Brogdon said. “It wasn’t a set call. Coach told me he was about to call timeout. I’m glad he didn’t. … I knew where the clock was.”

“He seems cool and calm but at the same time he’s the one who’s motivating us and firing us up,” Turner said of Brogdon.