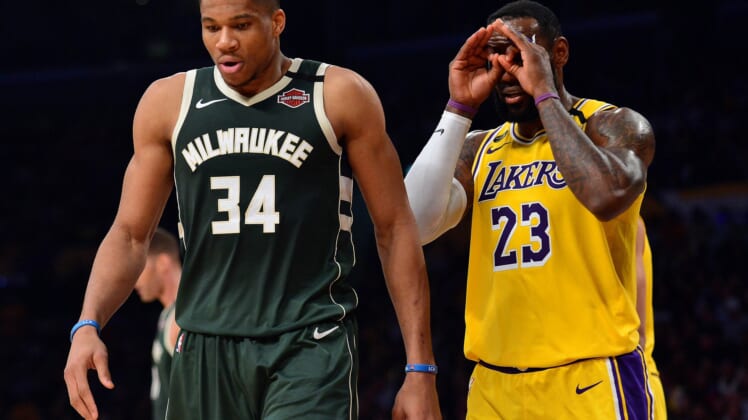 A lot has been decided around the NBA during the first week since its 2019-20 season resumed in Orlando. The Lakers and Bucks have already clinched No. 1 seeds. Meanwhile, the Washington Wizards’ existence seems to be pointless.

As the remainder of the regular season plays out at Walt Disney World, let’s check in on the power rankings of the 22 teams left in the bubble.

By virtue of their huge comeback win over the Miami Heat on Thursday, the Bucks have now clinched the top spot in the Eastern Conference Playoffs. This comes after the team dropped two of its first three in the Orlando bubble, including an humiliating upset loss to the Brooklyn Nets. Even then, there’s every reason to believe Milwaukee remains the best team in the NBA. The presence of reigning MVP Giannis Antetokounmpo coupled with the deepest bench in the Association leads me to this conclusion.

Los Angeles lost both ends of their only back-to-back, dropping games to the Thunder and Rockets on consecutive nights. For most, this would seem like a major red flag. That’s until we realize the Lakers clinched the top seed out west following a win over Utah earlier in the week. LeBron James (minor groin injury) also didn’t suit up in Thursday’s 16-point defeat to the Rockets. There’s no reason for alarm here. Los Angeles will now spend the next few games getting its rotation in order. That’s all the remainder of the regular season is good for.

Toronto has won each of its first three games in the bubble by an average of nearly 10 points per outing. That included a blowout 107-92 win over the Los Angeles Lakers last weekend. The defending champs seem to be clicking on all cylinders right now. This includes star guard Fred VanVleet averaging 21.7 points, 4.7 rebounds and 8.3 assists on 53% shooting during that three-game span.

Losses to the Lakers and Suns led some to believe that Los Angeles wasn’t quite right after a four-plus month hiatus. That was a bit concerning given that Kawhi Leonard and Paul George had ample rest to recover from nagging injuries. Still undermanned in the Orlando bubble, Los Angeles answered critics Thursday against a game Dallas Mavericks team. Leonard and George combined for 53 points, 13 rebounds and 11 assists in the 15-point win. Could this be a harbinger of things to come for the Clippers? One star NBA player seems to think so.

Miami picked up where it left off once returning to the season after surprising the masses during the pre-suspended portion of the campaign. That included big-time wins over the Denver Nuggets and Boston Celtics before Thursday’s outing against Milwaukee. Up 17 at the half, Miami blew the lead and ended up losing by 14 points. It was a disastrous performance that saw Miami’s starting front court shoot 33% from the field. The only saving grace was that this represented the second consecutive game Jimmy Butler (sore foot) has missed. He’ll be 100% and ready to go for the playoffs.

Just 2-2 since they resumed their season, the Celtics are still looking to find the right balance. Is this Kemba Walker’s team or is Jayson Tatum prepared to step up even more? Tatum shot just 2-of-18 from the field in Boston’s first game in Orlando against the Bucks on July 31. Since then, he’s averaging 25.3 points on 55% shooting from the field. If Tatum can continue to exert his dominance, these Celtics will be legit title contenders moving forward.

Pay attention to these following words. Michael Porter Jr. The second-year player has been absolutely brilliant since the campaign resumed last week. After missing his entire rookie season, the former first-round pick averaged just nine points per game before the season was suspended. Through four games in Orlando, Porter is averaging 26.3 points and 10.0 rebounds. Despite this, Denver boasts a 2-2 mark during that span. The rest of his team will need to step it up moving forward.

Fresh off a blowout win over the Los Angeles Lakers Wednesday evening, these Thunder now have to be taken seriously. The leadership of Chris Paul has helped out a lot. But a supporting cast that consists of Shai Gilgeous-Alexander and Danilo Gallinari is a primary reason why Oklahoma City might do damage in the playoffs. The Thunder are currently No. 5 out west, but could potentially be a top-three seed when all is said and done.

It has been an uneven resumption of the season for Utah. This includes losses to Western Conference rivals in that of the Thunder and Lakers in consecutive games. It’s really been about a lack of consistency from the team’s two biggest stars, Donovan Mitchell and Rudy Gobert. The hope here is that these two players find a rhythm following the drama we saw between the two after the season was suspended back on March 11.

It might seem like Houston is a bit low in these rankings. That’s fine. After all, they are subjective in nature. Despite wins over the Mavericks, Bucks and Lakers in Orlando, there’s some concern here. Primarily, Houston is attempting an average of 55 three-pointers since resuming its season. Anyone who has seen this team’s playoff failures in the past knows that’s not sustainable. A lack of size, defensive liabilities and a reliance on three-pointers could doom James Harden and Co. moving forward.

The Ben Simmons’ injury will have a major impact on what Philadelphia does during the remainder of the season. He suffered a partially dislocated kneecap during Wednesday’s win over the Washington Wizards and could potentially be lost for the remainder of the campaign. Regardless, this Sixers team struggled big time under embattled head coach Brett Brown before the season was suspended. This has not changed since.

Getting Luka Doncic back 100% after some ankle injuries prior to the season being suspended was expected to be big for Dallas. He’s done his part in Orlando, averaging 32.8 points, 7.3 rebounds and 9.8 assists in four games. The dude is something special. Despite this, Dallas is just 1-3 since resuming the season. The team is going to need much more from its supporting cast to make any type of splash in the playoffs.

With what we’ve seen from Damian Lillard thus far in Orlando, Portland could be the most dangerous team in the Western Conference. Dame dropped 45 points in Thursday’s win over the Denver Nuggets and is averaging north of 40 points per game in Orlando. The return of Jusuf Nurkic from an extended absence has also helped create depth for the Blazers. That doesn’t even take into account the reemergence of Carmelo Anthony. If this team finds a way into the playoffs, it could make some noise.

Indiana had won three consecutive games in Orlando prior to Thursday’s defeat at the hands of the Suns. Given the drama we saw surround Victor Oladipo in the lead up to the resumption of the season, that’s some good news. Though, it must be noted that the Pacers’ two previous wins came against the lowly Wizards and Magic. I want to see how this team performs against the Lakers, Heat (twice) and Rockets to close out the regular season before moving it up in the rankings.

As you can see, I still have high expectations for this young team. The idea of Zion Williamson and Co. taking on the Lakers in the first round seems to darn appealing. Unfortunately, Williamson was away from the bubble for over a week tending to a family emergency. It led to New Orleans limiting his minutes in the first two games. All said, the Pelicans are now just 1-3 in the bubble following Thursday’s blowout loss to Sacramento. With games coming up against the Wizards, Kings and Magic to close out the season, this team still has an opportunity for that play-in-tournament.

Disaster. That’s the only way to explain what has happened to this up-and-coming team in Orlando. Memphis has lost all four games since entering the bubble. It also lost star forward Jaren Jackson Jr. for the remainder of the campaign due to a knee injury. Ja Morant might be the Rookie of the Year, but he can only do so much. With quality teams chasing Memphis for the eighth spot, we’re not expecting too much from this young bunch moving forward.

Still a veteran-laden squad under head coach Gregg Popovich, it would not be a surprise if San Antonio inched into the playoffs now that the Grizzlies are dealing with injuries. The Spurs won their first two games in Orlando before dropping consecutive outings against Philadelphia and Denver. They are now the 11th seed out west, just two games behind Memphis. If San Antonio finds itself within four games of that spot and as the ninth seed, it will partake in a play-in-tournament. At that point, anything can happen.

Who had this on their 2020 bingo card? Following Thursday’s win over the Indiana Pacers, these Suns find themselves as the only undefeated team remaining in the bubble. Devin Booker is playing completely out of his mind. It has Phoenix thinking play-in tournament for the eighth seed. With Booker and Deandre Ayton fresh, it could lead to a surprising playoff run. At the very least, this is one exciting young team.

Interim Nets head coach Jacque Vaughn had no real chance of success when the team returned to its season minus a half-dozen players, Kyrie Irving and Kevin Durant included. Here’s a squad that had to sign the likes of Jamal Crawford, Tyler Johnson, Justin Anderson and Michael Beasley off the street just to fill out its roster. Crawford has since gone down to injury. Beasley didn’t even play a game after contracting COVID-19. Brooklyn will make the playoffs, but expect an extremely early exit.

Already pretty much locked into the eighth seed back east after Washington’s struggles, there’s really no hope for this team to make magic in its home city once the playoffs start. Orlando will likely either take on the Bucks or Raptors in the first round. Can you say four-game sweep? In reality, this team is likely headed for some major changes once the season comes to a culmination in October.

Despite a record-setting performance (49 points) in the first quarter against New Orleans Thursday and a blowout win, Sacramento’s season is now all but done. It currently sits as the 12th seed in the Western Conference and has three teams in between itself and a potential play-in-tournament for the final spot. The one saving grace here has been the performance of young guard De’Aaron Fox. He’s averaging 27.5 points in the first four bubble games.

Honestly, there was no reason for this team to return to its season after the likes of star guard Bradley Beal and forward Davis Bertans decided to opt out. After losing their first four games in Orlando, the Wizards actually find themselves behind the Charlotte Hornets in the Eastern Conference standing. Charlotte wasn’t even invited to Walt Disney World. Think about that for a second.