5 injuries that will have impact on the NBA Playoffs

The 2020-21 NBA regular season has been defined by injuries more than anything else. It’s a major backdrop as the truncated regular year comes to a conclusion and the NBA Playoffs start.

From Bradley Beal in the nation’s capital to Jamal Murray in the Colorado mountains and LeBron James in Hollywood, these injuries could have a major impact in the playoffs. Below, we look at the five biggest injuries and what they mean moving forward.

Just recently, Utah ruled Mitchell out for the final three regular-season games due to an ankle injury he suffered all the way back on April 16. This means Mitchell will miss the final 16 regular-season games for a Jazz squad with championship aspirations. There’s absolutely no telling whether he will be back at near 100% for the NBA Playoffs.

Mitchell, 24, has morphed into an absolute star for the surprising Jazz. He ranks in the top 10 in scoring at 26.4 points per game and is shooting 39% from distance. With Utah likely set to be the No. 1 seed out west, getting Mitchell back is going to be a big deal. A recent loss to the Golden State Warriors, who could be a Round 1 matchup, adds another layer to this. Without Mitchell in the mix, Utah wouldn’t be overwhelming favorites against either Golden State or the defending champion Los Angeles Lakers.

Ouch! The Celtics announced earlier this week that Brown will miss the remainder of the regular season and the NBA Playoffs with a torn ligament in his left wrist. Already likely forced into the play-in tournament after earning a trip to the Eastern Conference Finals a season ago, this is horrible news for Brad Stevens and the Celtics. 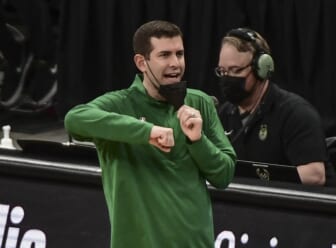 Brown has joined Jayson Tatum as an absolute star in Boston. He finishes the season averaging 24.7 points, 6.0 rebounds and 3.4 assists while shooting 48% from the field. With Brown out of action, these Celtics are going to need more production from the recently-acquired Evan Fournier and defensive stalwart Marcus Smart out on the perimeter. If not, the Celtics are looking at a premature exit from the postseason. That’s for sure.

The good news first. Denver has posted a 11-3 record since Murray went down with a torn ACL back on April 12. The bad news? All three losses have come against playoff teams in that of the Warriors, Lakers, and Nets. This could very well be an example of Nikola Jokic and Co. struggling against top-end competition without the Nuggets’ second-best player in the mix.

Likely looking at a first-round matchup with the Dallas Mavericks or Portland Trail Blazers, Murray’s injury is among the most significant in the NBA right now. Not having him in the mix against either Luka Doncic or Damian Lillard could lead to an early departure from the playoffs. As for who might step up, young forward Michael Porter Jr. has been balling out since Murray’s injury. He’s averaging 25.1 points and 6.4 rebounds on 50% shooting from distance over the past 14 games.

Engaged in a pretty awesome battle with Stephen Curry for the NBA scoring title, Beal is the latest star player to be impacted by the NBA injury bug. He went down with a hamstring injury during a 50-point performance this past weekend and remains sidelined. At the very least, Beal has been ruled out for one more game.

While the high-scoring guard will be back in the mix for the potential play-in tournament, there’s no telling whether he’s going to be 100%. Hamstring injuries have a way of lingering. This could impact an ascending Washington team that boasts a rejuvenated Russell Westbrook. Right now, the Wizards likely find themselves headed for a matchup with the underperforming Indiana Pacers in the play-in tournament.

Oh boy. Recent indications are that the reigning NBA Finals MVP won’t be anywhere near 100% for a likely play-in tournament. James has played in a total of two games since suffering that dreaded high-ankle sprain back on March 20. He reinjured said ankle in early May and has yet to return with the expectation of playing later in the week. 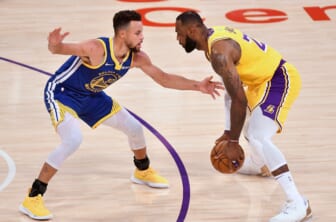 For their part, the underwhelming Lakers are a mere 9-15 in games James has missed this season. The defending champs are 29-15 in games James has suited up in. More than likely headed to the play-in tournament as the seventh seed, these Lakers are set to take on the ascending Golden State Warriors and Stephen Curry. If James is not 100%, a shocking exit at the hands of their bitter California rivals could be in the cards.