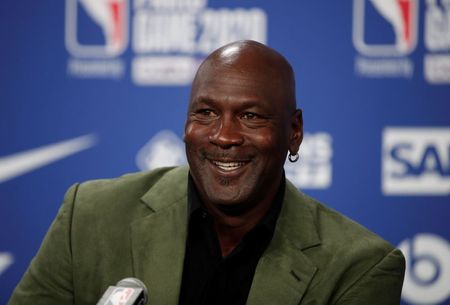 (Reuters) – DraftKings Inc said on Wednesday basketball legend Michael Jordan will take an undisclosed equity stake in the fantasy sports and gambling company and join its board as a special advisor.

Jordan, a six-time NBA champion who led the Chicago Bulls’ dynasty in the 1990s, is a Basketball Hall of Famer who owns the basketball team Charlotte Hornets.

His career was thrust into the spotlight after Netflix’s docuseries “The Last Dance”, which released in April and garnered a large television audience. In May, an autographed and well-worn pair of his Nike Air Jordan sneakers fetched a record $560,000 at an auction.

Episode 6 of the series delves into Jordan’s love of gambling on card games, in casinos and the golf course, and the controversy it created at the time the Bulls were deep in the running for an NBA championship.

Jordan has agreed to take an equity interest in DraftKings and will provide strategic and creative advice on areas including product development and marketing, the sports betting company said on Wednesday.

DraftKings was taken public earlier this year by an entity founded by Hollywood executives Jeff Sagansky and Harry Sloan in a deal that valued the company at $3.3 billion.

The announcement on Wednesday added nearly $800 million to the company’s market capitalization, which stood at $13.1 billion, as of last close, according to Refinitiv data.

There has been long-term optimism in the growing market for U.S. sports gambling, even as the COVID-19 pandemic has led to broadcast networks and sports leagues either postponing or rescheduling games and seasons.

(Reporting by Akanksha Rana in Bengaluru; Editing by Shailesh Kuber and Shinjini Ganguli)