NBA has one positive in latest COVID-19 testing 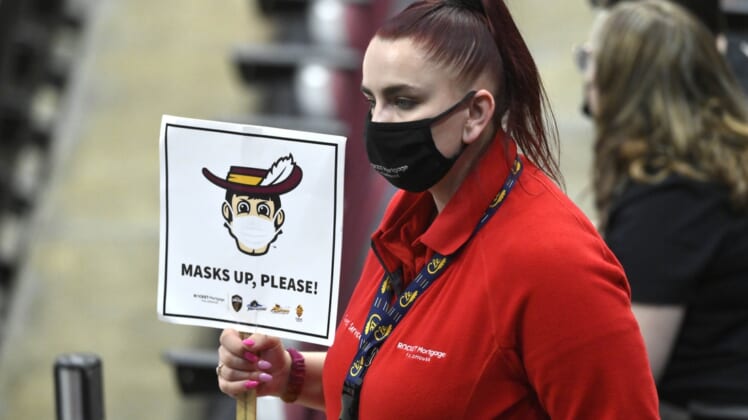 May 12, 2021; Cleveland, Ohio, USA; An arena usher holds a mask sign in the third quarter of a game between the Cleveland Cavaliers and the Boston Celtics at Rocket Mortgage FieldHouse. Mandatory Credit: David Richard-USA TODAY Sports

One unidentified NBA player tested positive for COVID-19 in the most recent round of testing.

In all, 496 players were tested since May 12, the league and the National Basketball Players Association said Wednesday.

The Indiana Pacers announced earlier this week that Caris LeVert would miss Tuesday night’s play-in game against the Charlottte Hornets — a contest they won — due to health and safety protocols.

LeVert also will miss Thursday night’s play-in game against the Washington Wizards and multiple playoff games if the team wins Thursday. Multiple outlets reported LeVert would be sidelined 10 to 14 days.

One player also tested positive in the reporting period that ended May 5.

Anyone who returns a confirmed positive test, or is identified as having been in close contact with an infected person, is isolated or quarantined until cleared under the rules established by the NBA and the players association in accordance with CDC guidance.