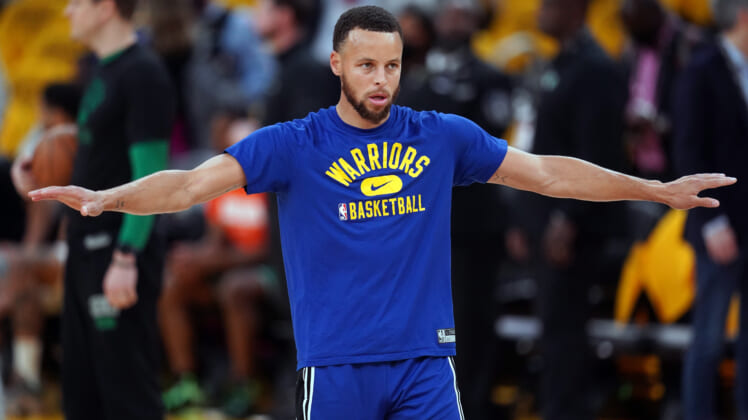 Seven-time NBA All-Star Tracy McGrady has a lot of respect for current-era superstar Stephen Curry. He just doesn’t think he is near the same level as basketball immortals like Michael Jordan and Kobe Bryant.

Curry is making his sixth appearance in the NBA Finals this month and is hoping to secure his fourth championship with the Golden State Warriors. He is already a two-time league MVP, the all-time leader in three-pointers, and is viewed as one of the greatest scorers this league has ever seen.

If he is able to beat the Boston Celtics, and if he can win the Finals MVP trophy, some will wonder where that puts him among the greats of the game. Will a fourth championship add his name to the GOAT conversation along with players like Michael Jordan, Kobe Bryant, and Magic Johnson?

While the idea is completely subjective, Tracy McGrady doesn’t believe the Warriors icon is as good as the sport’s very best. In his mind, Curry is a special talent. But when he was the lead figure of his team, he beat a weakened Cleveland Cavaliers in 2015 and then blew a 3-1 lead in their rematch the next year.

That, along with Kevin Durant being the best player on the 2017 and 2018 title teams, makes his achievements lesser in 16-year veteran mind compared to Jordan and Bryant.

“He has his career individually, and with what he’s accomplished with his team, it’s tough,” McGrady explained to NBC Sports Washington on Monday. “Because you’ve gotta think, he won a championship, right? Against LeBron [James] that didn’t have Kyrie [Irving], that didn’t have Kevin Love. He didn’t win the [Finals] MVP, right? Then he loses a 3-1 lead to LeBron. Gets [Kevin Durant]. [Durant] comes and wins two championships, so that gives Steph three championships but K.D. wins the two MVPs, right?

“We know Steph is like the 3-point God,” he continued. “But when it comes to putting him with [Jordan] and these guys that won that level of championships — Kobe and Magic Johnson — I don’t know where to rank him. I know he’s pretty high. But I think those guys are in a different class than Steph Curry based on [all of that]. They’re on championship teams. K.D. came and joined the Warriors and became the best player and helped Steph win two more championships. But Steph wasn’t the best player on that team.”

To Curry’s credit, Bryant wasn’t the most influential figure on the Los Angles Lakers teams he won his first three titles with. That was Shaquille O’Neal. The same could be said when Johnson won a championship in his rookie season alongside all-time points leader Kareem Abdul-Jabbar.

Jordan on the other hand was the top-dog on the squad for all six of the championships he won.