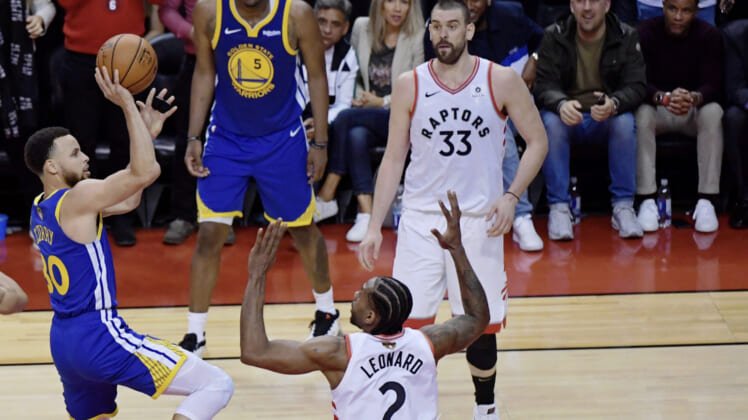 The Toronto Raptors’ series-opening 118-109 win over the Golden State Warriors in Game 1 of the NBA Finals Thursday night was not a surprise to those who have watched the team play.

Sure Golden State entered the Finals as odds-on favorites to win a third consecutive title. But Game 1 was never indicative of the team having a ton of success.

With an entire nation behind them, the electricity inside Scotiabank Arena and in the surrounding areas was something normally reserve for Oakland. Add in nine days of rest for the Warriors, and Toronto seemed primed to steal Game 1.

Again, the win isn’t a surprise. Rather, it’s how the Raptors came out on top that should be talked about.

The scheme: It paid off big time.

Getting out on transition: Beating the Warriors at their own game.

These are the three factors that led to Toronto’s Game 1 win over the defending champs. We’re fully expecting the Warriors to change up their game plan between now and Sunday. Even then, Raptors head coach Nick Nurse should be more than up for the task.

Kerr is going to have to adjust. Rarely is he ever outcoached. But it’s something we saw throughout the game Thursday night.

Toronto has to be feeling good about its series-opening win while knowing full well that the Warriors will come out strong in Game 2.

If nothing changes as it relates to what we mentioned here, a 2-0 series lead heading to Oakland isn’t out of the question. From there, Toronto would be in the driver’s seat big time.