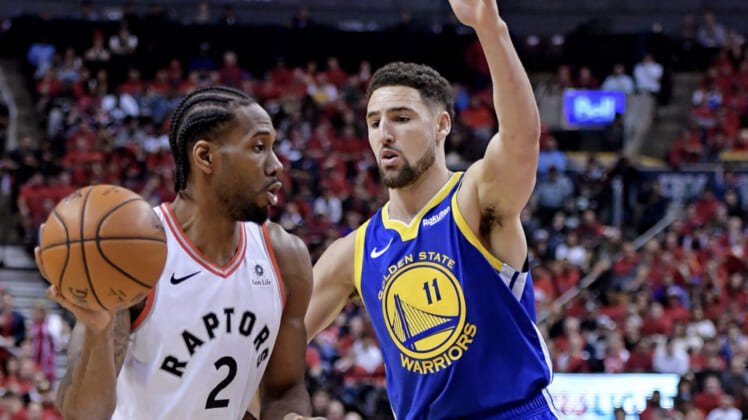 The Golden State Warriors looked to be dead in the water during Game 2 of the NBA Finals against the Raptors in Toronto. Paced by a 19-0 third quarter run, the two-time defending champs showed a ton of resiliency in coming back to win the game.

The big picture: Now that Golden State has taken home-court advantage away from the Raptors, it’s time for Kawhi Leonard and Co. to step up. Toronto will have to win at least one game in Oakland to take the series.

Here we look at five burning questions heading into Game 3 of the 2019 NBA Finals Wednesday evening at Oracle.

Dealing with a strained hamstring that cost him the end of Game 2, Thompson is listed as questionable for Wednesday evening. Though, one of the league’s toughest players said recently that it’s hard to imagine him not being able to go. Remember, here’s a dude that returned without missing any action in last year’s Finals after suffering a high-ankle sprain in Game 1.

Even if Thompson is able to go, he could be severely limited on both ends of the court. With Kevin Durant sidelined and Andre Iguodala not at 100%, this could be a big story. That’s especially true when talking about defending a player in Kawhi Leonard who is averaging nearly 29 points through the first two games of the Finals.

Plagued by foul trouble thus far in the Finals, Lowry clearly has not lived up to his end of the bargain. He’s averaging just 10.0 points on 30% shooting from the field and has committed 11 fouls compared to just six made field goals.

If the Raptors want to rebound and retake home court on Wednesday, Lowry must step up big time. Unfortunately, the All-Star has proven that the NBA Postseason might be too big of a stage for him. After all, Lowry has dropped 13 points or fewer nine times in the 2019 NBA Playoffs.

How will the Raptors scheme against Stephen Curry?

Curry had something to say about it. Warriors head coach Steve Kerr joked about it. With Klay Thompson sidelined for the final several minutes of Game 2, Toronto went with what is called a box and one defense on Curry. The idea was to deny Curry the ball. It worked to an extent.

Though, this type of gimmicky defense does in fact leave other players wide open. Andre Iguodala’s game-clinching three being a prime example of this. Toronto won’t have much success running this defense if Thompson plays. Meanwhile, the likes of Quinn Cook, Draymond Green and Iggy will be given ample opportunities to knock down wide-open shots.

Just how much of a home-court advantage is it for Golden State?

It was somewhat surprising to see the Warriors drop 11 games at Oracle during the regular season. Here’s a team that posted a 143-21 regular-season home record during Kerr’s first four seasons as its head coach. With Oracle set to close after three more games (at the most), we’re expecting the environment to be rocking in Oakland.

The better news for Warriors fans? They have won their past five playoff games at home by a combined 40 points. Meanwhile, Toronto boasts a marginal 4-4 record on the road in the playoffs.

Will Pascal Siakam and Marc Gasol step up?

Draymond Green took Siakam’s 32-point performance in Game 1 personally. In turn, the former NBA Defensive Player of the Year absolutely dominated his counterpart Sunday evening. Siakam scored just 12 points on 5-of-18 shooting and was negative four in 41 minutes of action. On the other hand, Gasol struggled big time after dropping 20 points in Game 1. He went for just six in Golden State’s win.

Much like Lowry, the Raptors need these two to step up big time if they are going to have an opportunity in Game 3. Simply put, Toronto can’t rely too much on Kawhi Leonard against what the Warriors throw out there.