NBA Finals: Biggest X-Factor for Both the Cavaliers and Warriors

With the 2015 NBA Finals just a couple days away, the basketball world is waiting in anticipation to see how this unlikely matchup between the Golden State Warriors and Cleveland Cavaliers will turn out.

Most of the focus has been on MVP’s Stephen Curry and LeBron James. If not those two players, Kyrie Irving and Klay Thompson have received some headlines in the lead up to the Finals.

But as we have seen in nearly every championship series in the past, unsung heroes step up to make the difference. From Robert Horry and Patty Mills, there just seems to be something about the sport’s grandest stage that helps some players up their game to new levels.

Here is one player from each the Cavaliers and Warriors that could act as an x-factor for the upcoming NBA Finals.

“He is the ultimate role player.” — @Scalabrine on Tristan Thompson
(via @AmericasPregame) pic.twitter.com/QMZv7NX3gG

This former top-five pick has done an amazing job for the Cavaliers since Kevin Love injured his shoulder against the Boston Celtics in Game 4 of the Eastern Conference Quarterfinals. In the 10 games since Love’s injury, Thompson is averaging 10.3 points, 11.1 rebounds and 1.6 steals per outing. He’s also shooting 58 percent from the field and is a combined +89 when on the court in those 10 games.

At 6-foot-9 and 238 pounds, Thompson doesn’t necessarily have a major size advantage over an undersized Draymond Green, who stands at 6-foot-7 and weighs just eight pounds less than his Cavaliers counterpart. Considering the success Green has had going up against more traditional power forwards, it’s going to be interesting to see how this plays out. Thompson doesn’t necessarily need to average a double-double here, but he needs to keep Green off the offensive boards if the Cavaliers are going to win the series. Every extra possession the Warriors get is yet another opportunity for the league’s top-scoring offense to take the lid off the basket. It’s going to be Thompson’s role to avoid that possibility in the Finals.

Offensively, it’s important that Thompson does a good job forcing Green—a really good perimeter defender—into the low post. That will enable the likes of LeBron James and J.R. Smith to go up against lesser defenders throughout the series. It will also limit Green’s impact on defense.

In addition to this, Thompson needs to find a way to stay with Green on the perimeter when he’s up against the Warriors power forward defensively. Green may not be the third member of the Splash Brothers, but he did shoot 44 percent from three-point range during the regular year. Without having a stat sheet in front of me, I can easily assume that a vast majority of those three-pointers were uncontested. Thompson has to prevent that in the Finals. 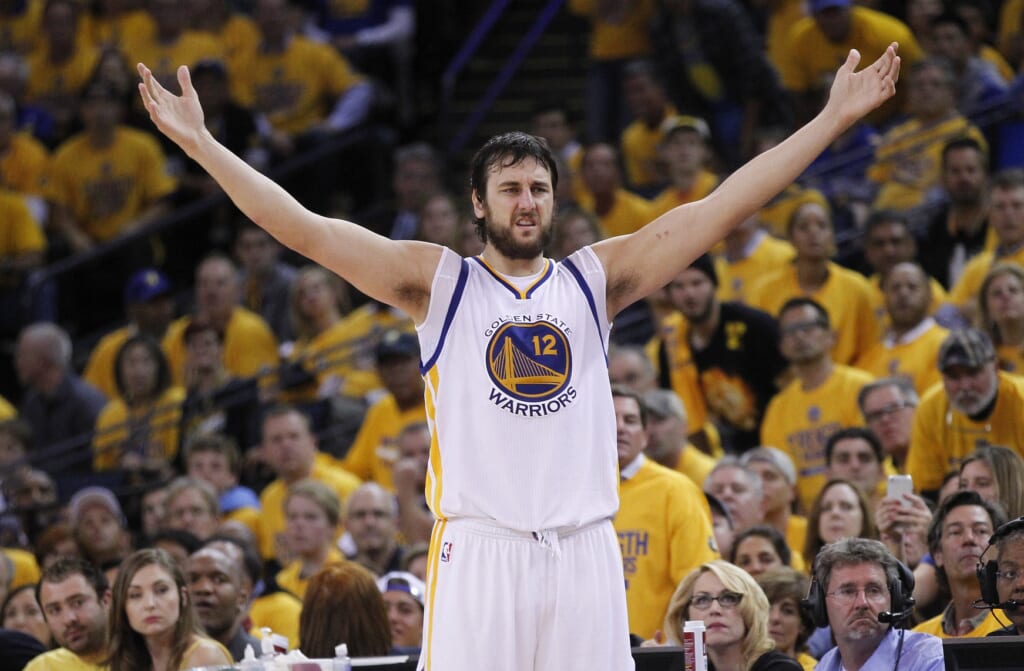 Courtesy of USA Today Sports: When Bogut’s on the court, the Warriors win. Period.

Postseason included, the Warriors are a ridiculous 70-12 when Bogut plays. To put that into perspective, the team is just 9-6 when he doesn’t play. So the first factor here has to be Bogut’s health. He needs to be on the court for each and every game of the series if Golden State has a chance to win.

The second thing to look at here is the Warriors success rate when Bogut is playing good basketball. Again looking at the team’s win-loss splits, Golden State is 24-1 when Bogut pulls down 10-plus rebounds and a perfect 16-0 when he plays 30-plus minutes. While we might see Bogut’s minutes limited a tad due to the emergence of backup center Festus Ezeli, the formula is rather simple here. When the former No. 1 overall pick is on the court, the Warriors win.

Now going up against another solid center in Timofey Mozgov, Bogut is going to have his hands full. The Aussie doesn’t necessarily need to score. Instead, he needs to be that interior presence to stop the likes of LeBron James and Kyrie Irving from driving down the lane unabated. That’s been the primary reason the Warriors continue to show success when Bogut is on the court. It’s going to be a tricky proposition, because foul trouble could become an issue here. And while Ezeli has performed well recently, the Warriors need to keep Bogut in the game in order to come out on top in the Finals. Every possible advanced stat backs this up.